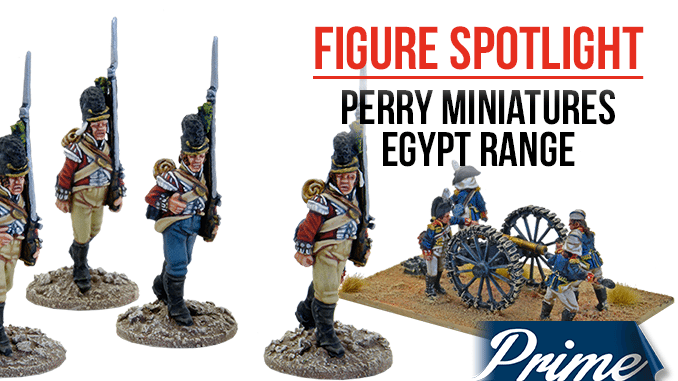 Here’s a look at some of the pieces in the Perry’s swiftly expanding Campaign in Egypt range. Alan Perry has been putting a lot of work into this range lately and it’s now looking comprehensive.

Recent releases include British Foot Artillery with 6pdr cannon on a Butler carriage (below), which also saw service in the Peninsular War. Crew can even be chosen with the curious ‘Mother Shipton’ headgear.

Line infantry aren’t neglected, and will be coming with a choice of stovepipe shakos and round hats.

Most unusual amongst this batch are British Grenadiers of the 61st Foot, wearing a curious flat-topped fur cap (below, spin and top pic) and the 90th Foot (Perthshire Volunteers) in Tarleton helmets (below, bottom pic).

Just to show that the Perrys will follow almost any unusual scent they pick up, we have de Watteville’s Swiss Regiment, who fought for the British in Egypt (below)

Away from the land forces we have a British flat bottom boat which comes with the naval crew, with troops being supplied in separate packs.

On the French side, expect Grenadiers/Carabiniers in Kleber regulation dress, Egypt 1799-1801, with bicornes ‘en colonne’ (fore and aft), with French Fusiliers of the same conflict wearing the curious leather caps in vogue at that time, a sort of ‘deerstalker’ with side flaps that could be tied up at the crown.