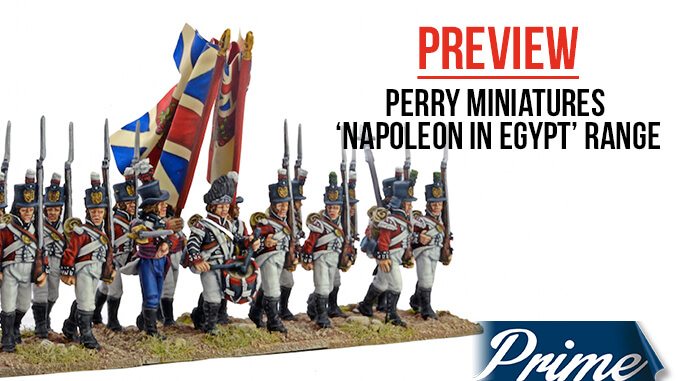 We had the chance to catch up with Alan Perry and chat about his new ‘range in progress’ covering Napoleon’s invasion of Egypt in 1798 and the eventual withdrawal of French troops by 1801.

Alan has carried out his characteristically extensive research into the period, focusing on not only uniforms and equipment for both sides in the campaign but also the flags used and uniform and facing colours, with some surprising results. For example, the traditional French uniforms in blue appear to have worn out fairly rapidly, so the French were forced to use shades of red, pink, light greens and tans to replace them, especially after the blockade of supply ships following Nelson’s victory at the Battle of the Nile. Alan has, as always, visited both regimental and national military museum’s to ensure that he has physically seen items from the campaign rather than simply using books or the internet.

The range so far sees the British forces being almost complete, with artillery coming up fairly soon. The infantry are almost all finished apart from some of the more ‘exotic’ types, for example the British-led Indian Army, who arrived more or less as the campaigns was finishing but could make a useful ‘what if?’ force. The French are almost complete, with the infantry 99% done. For the cavalry, Hussars and Chausseurs au Cheval are complete, with the Dragoons next on the list, and the much requested Dromedaries after that. Sculptor Norman Swales is working on the French artillery, although Napoleon’s forces also used Austrian-made guns, which are already in the standard Napoleonic range. This follows his work on the British guns, so he’s a busy chap!

The overall aim is to provide as complete a range as possible for Napoleon’s ‘aventure dans l’Orient’. The main impetus behind the range is Alan’s desire to create a series of games which encapsulate the campaign, so the completion of the range is as much based upon his desire to have the ‘proper’ figures for his own gaming as for the rest of us. Alan’s focus for a game will be the Battle of Alexandria in 1801, so he needs to have the relevant figures sculpted, cast and painted fairly quickly. These are all new figures, so gamers not only get the benefit of Alan’s enthusiasm for the project but can look forward to a well-researched, expertly sculpted range of excellent miniatures to buy and paint.

In the meantime, take a look at what has been produced so far in the photographs below and perhaps dig out those research materials in preparation for a new corner of the early Napoleonic Wars that offers a different take on the battles of the man who would one day go on to be the l’Empereur.