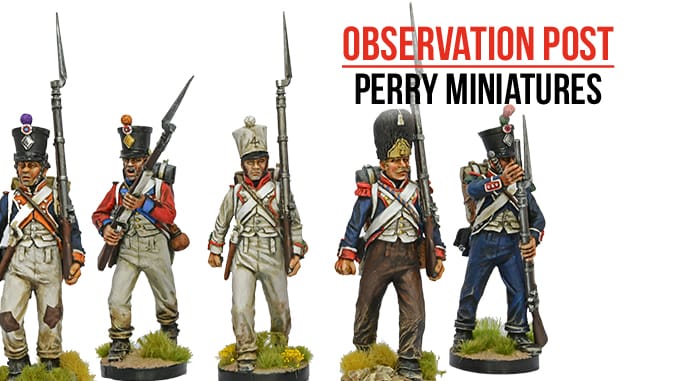 In preparation for the release of two new Napoleonic French plastic box sets, Alan Perry (one half of Perry Miniatures), invited us over to take a look at some of the painted 3-ups for the range.

Wargames Illustrated: So, what do we have here?

Alan Perry: These are resin figures that have been cast from the originally sculpted 3-ups and painted by me. They are some of the figures from two forthcoming Napoleonic French Infantry mid-war (1807 – 1814) box sets we will be releasing.

They are wearing the long-tail coats which were distinctive of the pre-1812 period (1812 – 1814 being covered in our earlier French Infantry set).

So, as I said there will be two boxes, a battalion box which has everything in it (42 figures) and a second box which will just contain the elite companies and the command – ideal for people who want to use the figures for skirmish games like Sharp Practice.

WI: Looking specifically at the figures we’ve got ‘spin-arounds’ of. Who do we have here?

AP: Well, this fellow in the red coat is a Swiss Grenadier. He could of course have been painted up as regular French, it’s only the colour of the coat that makes him Swiss.

WI: How about this chap marching?

AP: He is from the Légion Franche Etrangère, a pre-curser to the French Foreign Legion. So, he could be a German, a Pole, or from any country that Napoleon had invaded, or he may in fact be a deserter from an enemy army.

WI: And the soldier firing?

AP: He’s a French Voltigeur, wearing full dress shako, which is quite often seen in pictures and mentioned in text as being worn in combat, probably because the tall plume could potentially be seen at a distance and above the smoke of the battlefield. In the final box set this full-dress hat/head will be an option modellers can go for if they wish.

AP: This soldier is from Régiment de La Tour d’Auvergne, 1er régiment étranger (1805 – 1811). He’s a good example for the fact that courtesy of his cut-down coast tails, he (and other figures in the Elite Companies box) could be used as French Light Infantry, he would then be wearing blue rather than green though.

WI: What makes you decide to give a figure a shouting expression?

AP: Ha, ha, it’s just an option really, some people might like the look of a figure advancing into combat, roaring as they go, or perhaps an NCO barking orders. The French did a lot of shouting actually – when they advanced into battle they were quite loud – as opposed to the British.

WI: Away from the French infantry, the work-in-progress figure we have photographed is an Austrian cavalryman, tell us a bit about him.

AP: The first thing to underline is, as you said, he’s not the finished article. He is a Dragoon, although in the Austrian Cavalry box set you will have the option to use him as a Cuirassier if you wish. There will be an additional Hussar box set after that. The set will contain a mix of attacking poses, shouldered arms, scabbarded swords, fatigue caps, etc. so you can go for anything from full charge to resting, or a mix of both.

WI: Thanks for that. Which do you prefer, working on 3-ups for plastic or ‘in-scale’ for metal?

AP: I like the mix. After doing a range of 3-ups it’s nice to switch back to 28mm, but then after doing those for a while it’s nice to do some 3-ups.

WI: What are you going to do with the painted resins now?

AP: They will be used for the photos on the in-box uniform guide leaflet, then they will sit on my shelf and look pretty.

There’s no release date on these yet by the way, that will come down to the tooling.

WI: Thanks very much!