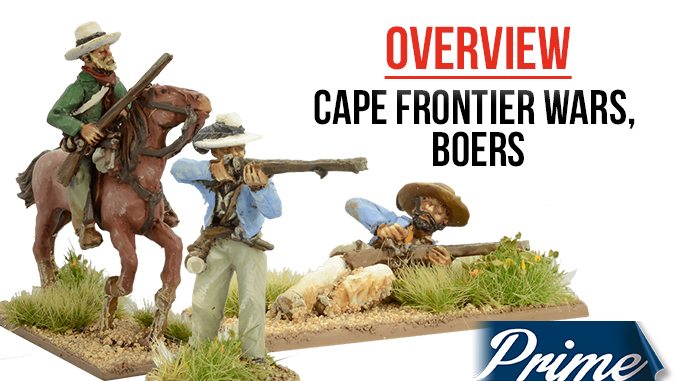 Adding to their Cape Frontiers Wars range, Perry Miniatures have seven packs of Boers designed for usage in a number of conflicts from the 1820’s up until the 1840’s.

In the Cape Warriors section of the website, these metal figures include Mounted and Dismounted Boers, all in suitable costume of the time and armed with muskets and shotguns.

These figures are suitable for the Battle of Blood River and the endless encounters between the Voortrekkers and the different African tribes during the expansion period.

In addition to the fairly standard poses of mounted and dismounted Boers are two packs worthy of note, CFW 8 and CFW 12. These are a Boer Command pack consisting of a generic Commando leader and Commandant-General Pretorius, the man that went on to be such an important leader of the Boer peoples.

CFW12 is a fairly unusual pack in that it represents a group of Boer women and children, most of whom are armed, that show that everyone was involved during the Boer efforts to establish a homeland.

All in all, these are welcome releases for an aspect of African history that hasn’t been covered in any great detail by many miniatures companies. As this range continues to expand, it is perhaps one to keep an eye on in the future.

Boer figure comparison – the three figures on the left are Perry Miniatures, the three on the right are from Empress.