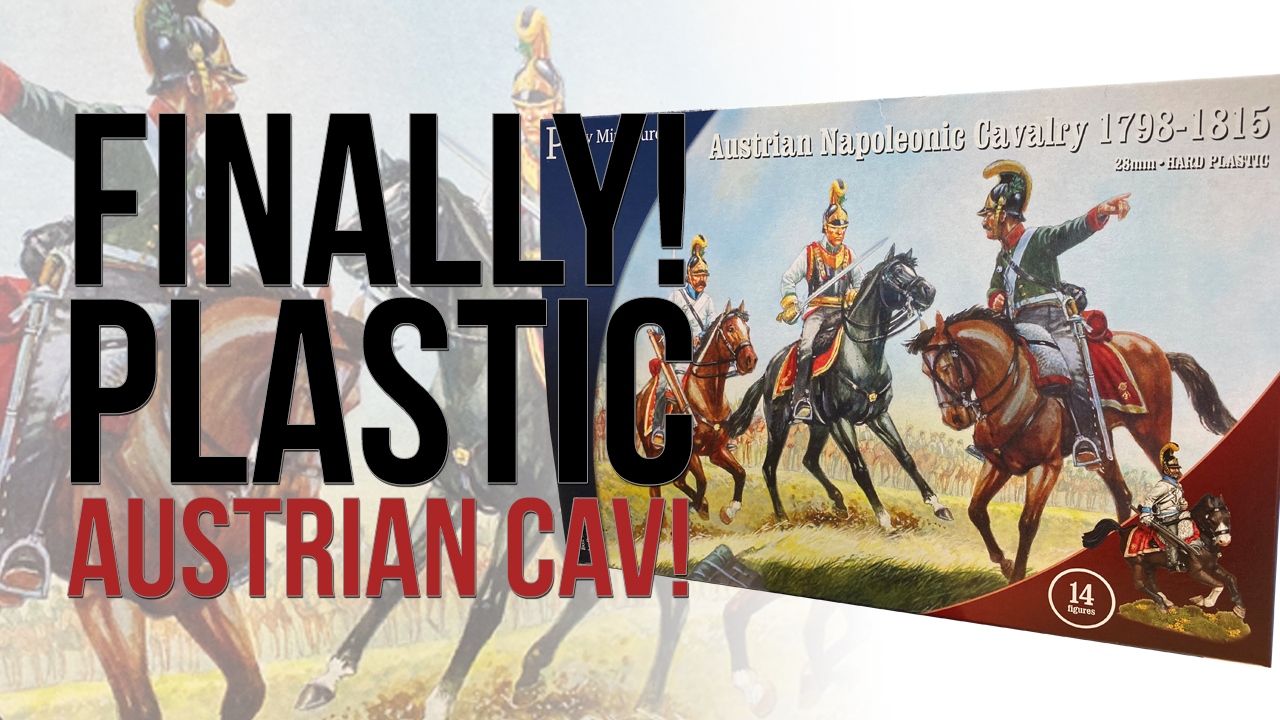 This new plastic Napoleonic box set from Perry Miniatures was due to be released at Salute 2020, but we all know what happened there, so this latest offering – Austrian Napoleonic Cavalry 1798 – 1815 designed by Alan Perry, was pushed back slightly and came out early June.

Inside the instantly recognisable Perry packaging we have a total of nine plastic frames, which form 14 mounted figures, along with bases and a reference sheet.

The first four frames feature most of the arms, legs and weapons of the cavalrymen. We have drawn swords with arms attached in a charging  pose, along with swords in scabbards, empty scabbards and arms and swords at rest.

We also have bucketed carbines and picket stakes – which were used to tie up horses in camp.

There are ten heads per frame plus one separate helmet. All these head variants (notably far more heads that bodies) allow for the option to field different troop types e.g. Cuirassiers or Dragoons, plus cavalrymen from different periods of the war.

It probably goes without saying that the detail on the body parts is fantastic and includes perfectly formed finery like the ‘very Austrian’ sprig of oak leaves attached to helmets and carbine ramrods attached to some of the torsos – be careful with this last detail when handling the frames as they can be easily damaged.

Our next frame is the horses, or at least six of them. These come in three parts, left and right body and head. Each body comes pleasingly heavily laden with kit and trappings, helping with the ‘on campaign’ look of the figures. All six poses are different, but all have the horses on the move, I won’t embarrass myself by declaring if they are trotting, cantering or galloping.

The last frame is labelled ‘Command’ and contains components to build four more horses, as well as five torsos, five separate heads and various arms and equipment, including swords, a bugle and a lance.

As well as the obligatory frame of bases we have the less than obligatory, but always welcome, well-researched reference sheet – four A5 pages showing facings of the various Austrian Cuirassier, Dragoon and Chevauxlegers regiments which can be formed using this set – along with other useful notes on flags, equipment and weaponry. Those sticklers for detail amongst us will be well catered for with information concerning which helmets etc should be used for which particular years of the war.

Another fine box set release from Perry Miniatures, which will satisfy their legion of Napoleonic fans just long enough for them to ask “what’s next?”