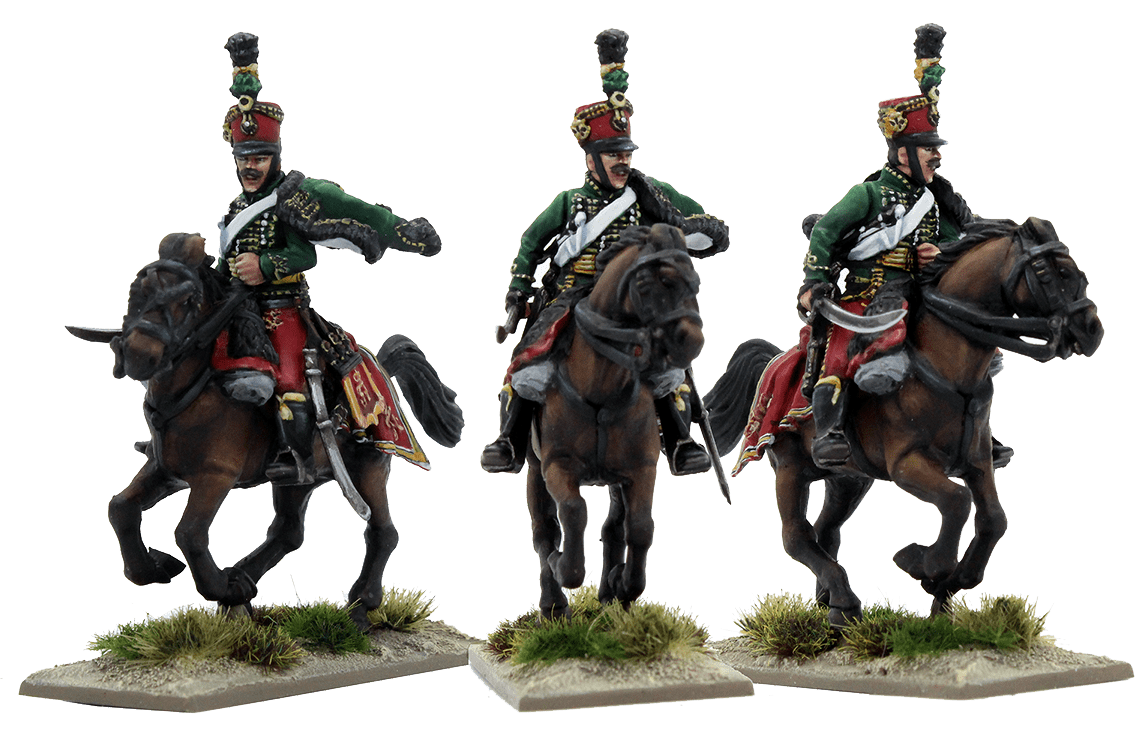 The Perrys (who you can read a new interview with in Wi400) have just released another plastic box set – this time it’s Austrian Napoleonic Hussars and, once built, they are some of the prettiest plastics we’ve seen.

Their wow factor is aided by the visual flair inherent to the Austrian Hussars themselves, whose uniforms must have been a gift and curse to sculptor Alan. They are bedecked with layer upon layer of detailing, from the intricate froggings and loops on their uniforms, through the fur-lined pelisses that flow behind, to the meticulously accurate sabretache.

The casting here is as sharp as ever, picking up all of the details, and it is so uniformly accurate, fine, and crisp that it has the ‘computer-aided precision’ look you’d usually associate with digitally sculpted plastics. Because they are traditionally done the models also possess all the character and flair that Alan’s decades of traditional sculpting experience allow.

The frames aren’t short of options either; the box consists of three different ones – four standard Hussar frames, a command Hussar frame, and four-horse frames – with which you can build 14 miniatures.

The horse frames were previously included in the Austrian Cavalry set and to ensure further accuracy there are additional parts to add to the shabraque, included on the other frames. The horses are the least comfortable fit-out of all elements – nothing terrible but slight gaps do show either at the neck or between the reins’ connections in places.

The main new frame has enough parts to build three Hussars and the possibilities are wide. There are parade ground legs or on-campaign overalls options. Three brilliantly detailed torsos, which include the left arm, go onto these legs and you can choose between nine sword arms to make different poses: full charge, sword shouldered, or attacking. The rest of the base build is made from three of the six heads included. The quality and accuracy of the parts can be summarised in five words – meticulously represented and expertly rendered.

The models aren’t quick to build as another layer of detail now needs to be attached. There are three separate pistols to hang from their side and three meticulously detailed sabretaches with fine straps and the monogram of Franz Joseph present. Finally, three pelisses fix onto the shoulders to flow behind.

The last parts on the frame are six shabraque extensions (mentioned earlier) to fit over the rear of the existing saddlecloths and add the same FJ monogram to the corners.

The command frame has two more horses, four new head options (all as full of character as the ones on the other frame), and the torsos, legs, pelisses, sabretaches (with sabres holstered should you want to have them wielding different weapons) needed to make two final Hussars. Notable extras here are a splendid Officer’s sabretache (weapon drawn), and four more arm options. There’s a trumpet and sword, then two pistols including a smaller officer’s pistol.

These are an excellent addition to Perry Miniatures’ extensive Napoleonics range and although they are a bit fiddly and time-consuming to build the results are more than worth it.