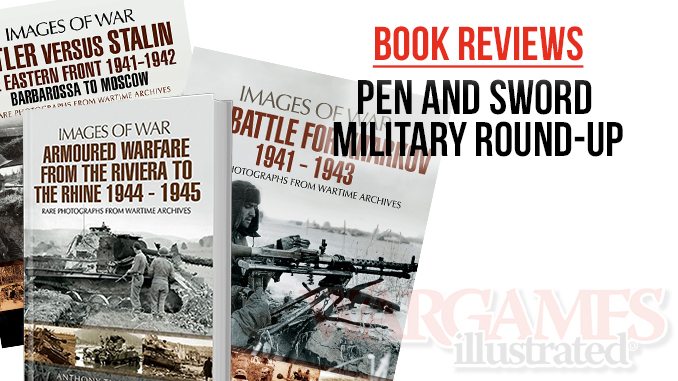 Pen & Sword Books is a busy little publishing company, particularly in its military section. They publish a wide array of books of varying quality but they are rarely dull. Keeping that in mind, this review will consider three books from the Pen & Sword Images of War range, all concerning combat in World War II.

Tucker-Jones begins his review of Operation Dragoon, the invasion of southern France, with an introductory overview of the whole campaign. He is somewhat sympathetic to the Wehrmacht faced with Hitler’s intransigence as commander-in-chief, and it is Hitler that gets the blame for most of the problems to befall his commanders in France. The author follows up with ten chapters, breaking down the campaign into its constituent parts, each with its own overview and collection of black and white photographs, not all of which directly depict the campaign. Nevertheless, Tucker-Jones demonstrates that the so-called Champagne Campaign was not the cakewalk some historians might have you believe.

In The Battle of Kharkov, Tucker-Jones changes his focus to the Eastern Front and in particular Ukraine’s second city Kharkov. This was the scene of four major battles between the Soviets and Germans despite being well down on Hitler’s initial objectives for Operation Barbarossa in 1941. Tucker-Jones follows the format of introductory overview followed by more detailed, episodic chapters that narrate combat operations around the doomed city. The black and white photographs in The Battle of Kharkov are more illuminating than in Tucker-Jones’s Riviera book, perhaps because the brutality of the fighting on the Eastern Front was much more evident. Tucker-Jones’s selection of photographs and accompanying text also bring out the peculiarly bleak nature of that conflict.

Nik Cornish also surveys the Eastern Front in Hitler versus Stalin. He follows the same format of introduction followed by narrative chapters loaded with black and white photographs. Cornish’s aim is to tell the broad story of the German invasion of the Soviet Union, Operation Barbarossa, in June 1941 through to the Soviet winter counter-offensive in January 1942. The six months in-between saw an intense, almost unrelenting, period of ferocious combat along a wide front and in numerous often hostile environments. Fortunately, as with the other two books reviewed here, the German soldiers in particular liked to take cameras along with them to record their experiences. Moreover, surveying such broad operations provides Cornish with more choices when it comes to photographs. His skill lies in marrying those to his lucid narrative.

In his Preface, Cornish describes the concept behind Images of War as providing “the reader with a heavily illustrated overview” of the war. Such a modest goal is easily achieved but producing a quality publication less so. Indeed, the whole enterprise relies on the availability of suitable photographs, and the broader the survey the more likely that is to happen. Moreover, there is a distinction between state sanctioned photographs and private photographs, skewing the nature of the historical record and inevitably our perception of what we are looking at. In addition, photographs rarely work on their own: suitably informative captions are essential. Cornish’s captions are routinely so while Tucker-Jones’s need some work, though he is strong on armoured vehicles. That flaw might lie at the hands of the editors who also fail to include an index or even a bibliography for further reading, which is surely a necessary component of any historical work? It is also not clear who the intended audience is for these publications. There is little in them for wargamers other than some background inspiration for their games. Modellers will get more out of them in that regard, though the books will also appeal to the general reader attracted to the period or specific campaigns.