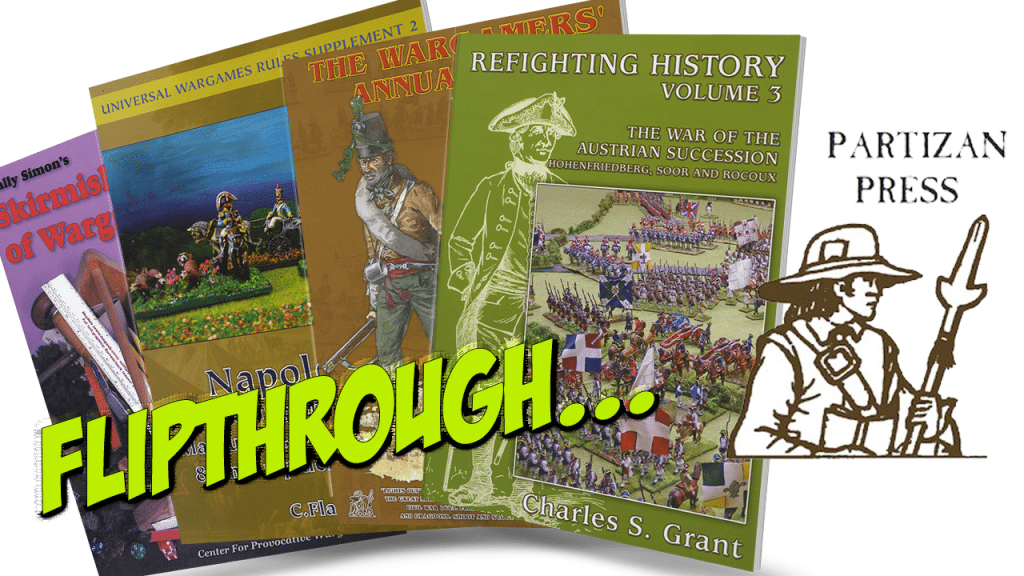 We’ve had a whole bundle of releases sent our way from Partizan Press, ranging from how to design skirmish wargames to the 2017 annual. So, without further ado, let’s dive into the tomes we have and take a look.

The first book is Wally Simon’s Skirmish Secrets of Wargames Design Volume ♯6, billed as A Tabletop Toolkit of Ideas, Analysis and Rule Mechanics. Fundamentally, that’s what you get, a series of well-crafted examples of rules that cater for a whole range of periods from the Medieval to the Modern day. These rules and ideas can be used ‘as is’ or exported as concepts into your favourite era or rules system. Taken from the Potomac Wargamers Review, these make good games for a club night or could be the basis of a whole new set of rules that could evolve into something more.

Our next book is the Universal Wargames Rules Supplement 2: Napoleonic and covers such interesting aspects of warfare as Foraging, Insurrection, Marauders, Bakeries, Convoy and Encampment wargaming. In essence, the book guides you through the ‘nitty gritty’ of campaign life, often providing suggested rules and miniatures to represent the explored topics on the tabletop. They are intended to ‘slot in’ to the rules system you are using and to add an additional level of realism that reflects the period. Although most wargames rules focus on the frontline, these rules attempt to provide the interested gamer with rules to explore the opportunities for the types of encounters that would have taken place in the rear areas of many armies – in many ways, the ideas and rules presented can enhance a Napoleonic era campaign and add the opportunity to undertake small scale games or skirmish actions to harass the enemy along the all important supply line.

The Wargamer’s Annual 2017 continues to provide a whole wealth of wargaming goodness. With contributions and editorial oversight by Charles S. Grant, there is much to please the historical wargamer. Wargaming the Great Northern War, a full set of Napoleonic Light Infantry rules, 17thC modeling projects, a sample scenario for the English Civil War, a guide to constructing a gate house, adapting aspects of board games to the tabletop, some thoughts on Horse Soldiers and Dragoons and much, much more, there is pretty much something for everyone, with plenty of the late, great Bob Marrion’s artwork and some suitable photography to add another level of enjoyment.

Our last offering from Partizan press is entirely the work of Charles S. Grant and represents Volume 3 in the Refighting History series, following on from the last volume and covering The War of the Austrian Succession. After the usual update on the continuing growth of some of the finest 18th Century armies in miniature that ever graced a tabletop, we are presented with four well-researched battles that enable the gamer to re-enact some of the key encounters (and a much smaller affair) from the bloody conflict found in the title. All make use of orders of battle, maps and copious photographs of wonderfully painted miniatures ‘in action’. Mr. Grant also offers his thoughts on the use of artillery during this period and how to make the best of what is on offer.

As always, in trying to cover four useful offerings from the prodigious output from Parizan Press, available from Caliver Books in the UK and Europe and On Military Matters in the USA, it proves impossible to do them full justice. We can heartily recommend these works for those interested in the topics being addressed and would suggest that a browse of the other titles on offer would bear fruit for almost any historical gamer.