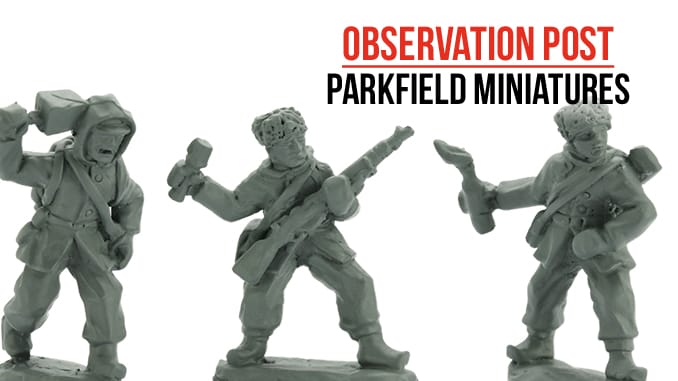 Parkfield Miniatures have a comprehensive range of miniatures for the Winter War between Russia and Finland which lasted from November 1939 until March 1940. They have added more new figures recently.

Each of the Parkfield Miniatures range is available as a single figure or in platoon packs. However, the light and heavy weapons are provided as packs.

We’ve taken a number of sample figures from what we’ve been sent to showcase, focussing upon the more unusual or support weapons.

Our first set of figures represent Finnish ‘anti-tank infantry’. These are figures in typical Finnish ski suits who are armed with handheld improvised weapons to engage the tanks of the Russian invaders. We have one figure with a large, square anti-tank grenade, one with a standard stick grenade and one with a petrol bomb or Molotov cocktail. All the figures are depicted ‘in action’, advancing and preparing to hurl thier weapons.

The next pair are also from a Finnish pack, this time an LMG team. The gunner has a captured Soviet DP-27 LMG, distinguished by its round magazine. The loader carries a improvised satchel which no doubt contains more magazines. The pair are depicted ‘on the move’, perhaps heading to a new set-up position.

Lastly, we have a Soviet 50mm mortar team, clad in inadequate greatcoats and headgear compared to the harsh conditions of a Finnish winter. The three members of the team are preparing to fire, the leader with his hand poised ready to signal.

Each of these figures is fairly well sculpted, with some accurate detailing on the uniforms and equipment. These are fairly basic miniatures from one of the more obscure parts of the Early WW2 period but are well worth a look, especially as the range contains so many useful figures and is being expanded.