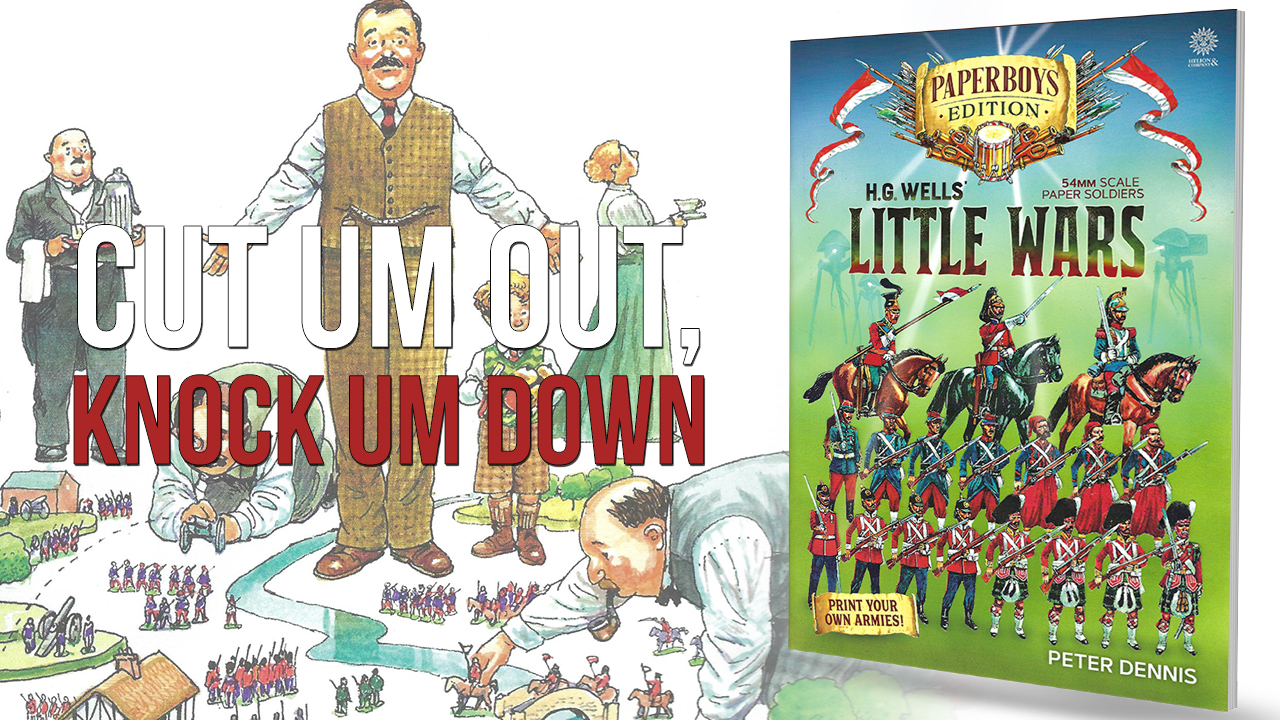 When Peter Dennis isn’t supplying fantastic artwork to the biggest names in wargaming and military history he works on a series of books with Helion and Company which he affectionally calls Paperboys.

I was somewhat shocked to turn the cover of this, the latest in the series, to discover there are now 14 ‘Paperboys Editions’ in total and although the series has seen variations to the format in the form of building and ships, this book – H.G. Wells’ Little Wars’ is the first to bring us paper soldiers in 54mm and be (in part at least) a reprint of an earlier wargaming classic.

Andy Callan usually supplements Peter’s books with rules on playing with the soldiers presented within each Paperboys Edition, but on this occasion Andy introduces us to H.G. Wells’ Little Wars with two pages of background on how Little Wars came about and where it sits in the pantheon of our hobby. Andy uses his two pages sagely with both a personal and factual take on the 1913 edition of the book.

By page four we are into the reprint of the original text of Little Wars. In brief summary, what H.G. Wells created was the first published set of wargames rules, which contain many elements we recognise in a modern wargame, like rules for “The Move” also know as the Turn, “Mobility” aka movement and Hand-to-Hand fighting. Wells even provides advanced  and optional rules.

Where Little Wars radically differs from the wargames we play today, and were it might be considered childish at the side of the undauntedly manly games we engage in, is that in Little Wars you use a toy gun to shoot at and knock over your opponent’s figures. You simply can’t play the game without a projectile firing little cannon. A subject we will return to after we move through the rest of the book.

After the main rules we come to a section entitled Appendix – Little Wars as Kriegspiel. Here Wells tells us that although Little Wars is not intended as a Kriegspiel i.e. a wargame designed with the intention of teaching battlefield tactics to army officers, it can be used as such if the following rule modifications are made.

At this point you may be thinking “hello this is where Wells dispensers with the firing of a toy gun and takes up the dice. I’m afraid not. He actually adds in more toy gun action to represent rifle-fire and also suggests dropping “brass screws of various sizes and weights” to represent shell shot.

The Kriegspiel section goes on to  discuss more rules for engineers, transport and supply, cavalry charges and a host of other things that Wells considers alter his Little Wars game; which is “played by amateurish persons”, into a serious military exercise. I couldn’t comment, and indeed I won’t pass comment on whether Little Wars or Little Wars Kriegspiel is worth playing at all, it’s so far removed from the remit of a modern wargame that I may as well discuss the pro-and cons of monopoly or tennis.

Unlike the original book the Little Wars rules conclude with a very useful (if you ever play the game at all!) Rules Summary.

Suffice to say the whole thing is an interesting read and you get a feeling that you are looking back into the history of our hobby, helped along by the artists charming little illustrations of toy soldiers.

Moving on. Just before we get into the figures, Andy Callan returns with some notes on turning H.G. Wells most famous creations into a Little Wars game – The Martians from War of the Worlds. So there’s one page of simple rules here for shooting at the tripods from outer space.

Over the next two and a half pages Peter Dennis gives us the instructions we need for bringing the Paperboys to life – everything you need to know about cutting, and sticking and creating your paper army. As Peter points out “If you haven’t made paper Soldiers before you are making a wise decision starting with these 54mm scale fellows rather than the 28s (in the other books), they are easier to cut out”.

After dealing with constructing ‘The Figures’ we get onto the star of the show – the Cannon. Yes, as I mentioned you can’t play Little Wars without a projectile firing toy gun and Peter provides notes on making your own from paper, powered by rubber bands and with the suggestion of firing “kitchen towel dadded with PVA”.

We finish with instructions on making the War of the Worlds Tripod, before heading into the paper soldier templates.

Beginning with mounted commanders, we then go into Red Grenadier Guards, before Red Line infantry advancing and marching. Most of the paperboys come with separate weapons and backpacks and all are either members of the Red or Blue army.

Sikhs, Lancers, Zouaves and the like are all included. It’s worth noting that these pages are designed to be copied and printed out onto standard ‘photocopying paper – the figures shouldn’t be trimmed from the book.

The book concludes with a template for the cannon and War of the Worlds civilians and the tripod.

There you have it, H.G. Wells Little Wars, Paperboys style. It’s an impressive piece of work and clearly a labour of love for Peter Dennis. I really enjoyed reading about the history of Little Wars and dipping in and out of the rules. Piecing together the Paperboys themselves, is a strangely addictive exercise and whilst I’ve not yet tackled the gun the whole project can be very fulfilling with plenty of fun to be had at the end of it.