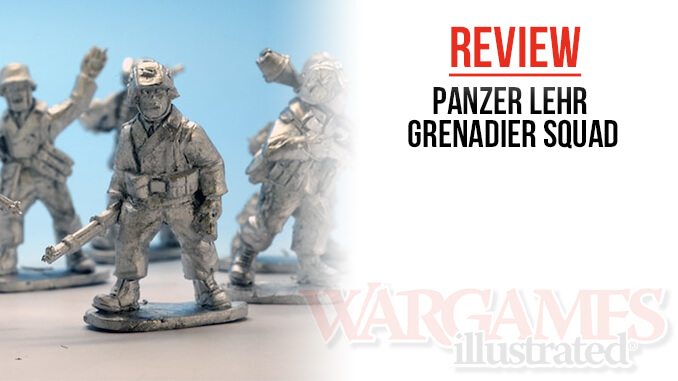 This pack contains 10 figures which represent a squad from the elite Panzer Lehr Division, created during the latter years of WW2. As the men in this unit were veterans drawn from German Panzer Schule (Panzer School) instructors, they are depicted in Panzer crew jackets rather than them wearing the standard uniform for infantry.

There are two NCO / officer types with MP40’s, five riflemen with KAR98’s, a two man MG42 team and a figure with an MP40 across his chest whilst carrying a Panzerfaust.

PROS: All the figures are well sculpted and have a range of poses. The details on the uniforms is excellent, including the nice touch of what look like combat awards on some of the figures.

CONS: some of the riflemen appear to be in largely the same body pose, suggesting the use of ‘dollies’. Although this is common practice, it is always good to see some individual character.

SCOPE: These figures would fit nicely into the battle for Normandy, all the way to the very end of the war.