Panther Tanks: German Army and Waffen-SS Defence of the West, 1945 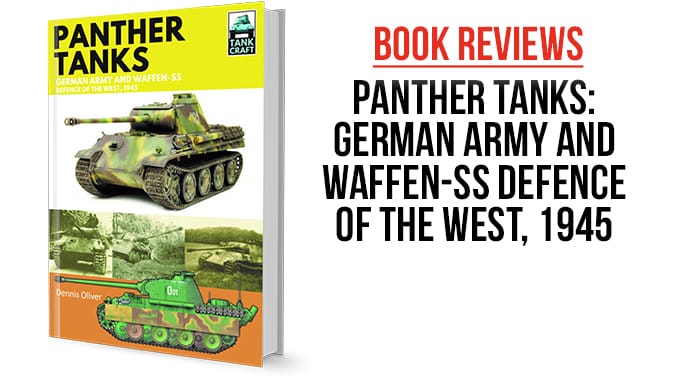 It sometimes strikes me as extraordinary the lengths some writers will go to research their subjects. Dennis Oliver’s Panther Tanks: German Army and Waffen-SS Defence of the West, 1945, part of Pen & Sword’s Tank Craft series, illustrates that point. This is a glossy, A4 sized, book consisting of 64 jam-packed pages, incorporating many photos and colour plates of Panthers. After a brief overview of the fighting on the Western Front in the closing months of World War II, Oliver narrates the story of this vital weapon for the defence of the Reich in great detail by focusing on unit histories. This allows his readers to follow those units as they duelled against the Allies before ultimately succumbing to defeat. Along the way, Oliver describes how the panzer units were organized and where they fought, sometimes with appealing little details about the men who fought in them. In addition, the author describes the technical modifications to the Panthers as well as how they were camouflaged.

But telling the story of the Panther is not the true purpose of Oliver’s book: it is the modelling section, uncomfortably planted in the middle and interrupting the flow of the text, that makes the Tank Craft series exceptionally useful for modellers and wargamers. Oliver provides three superb examples of Panther models built by master craftsmen, and follows those with a comprehensive catalogue of where to get these models for yourself. And get your airbrush ready because the excellent colour plates of the various Panther camouflages will have you reaching for it in short order. All in all, Panther Tanks is a fine addition to Pen & Sword’s growing library of books on World War II vehicles, and is highly recommended.