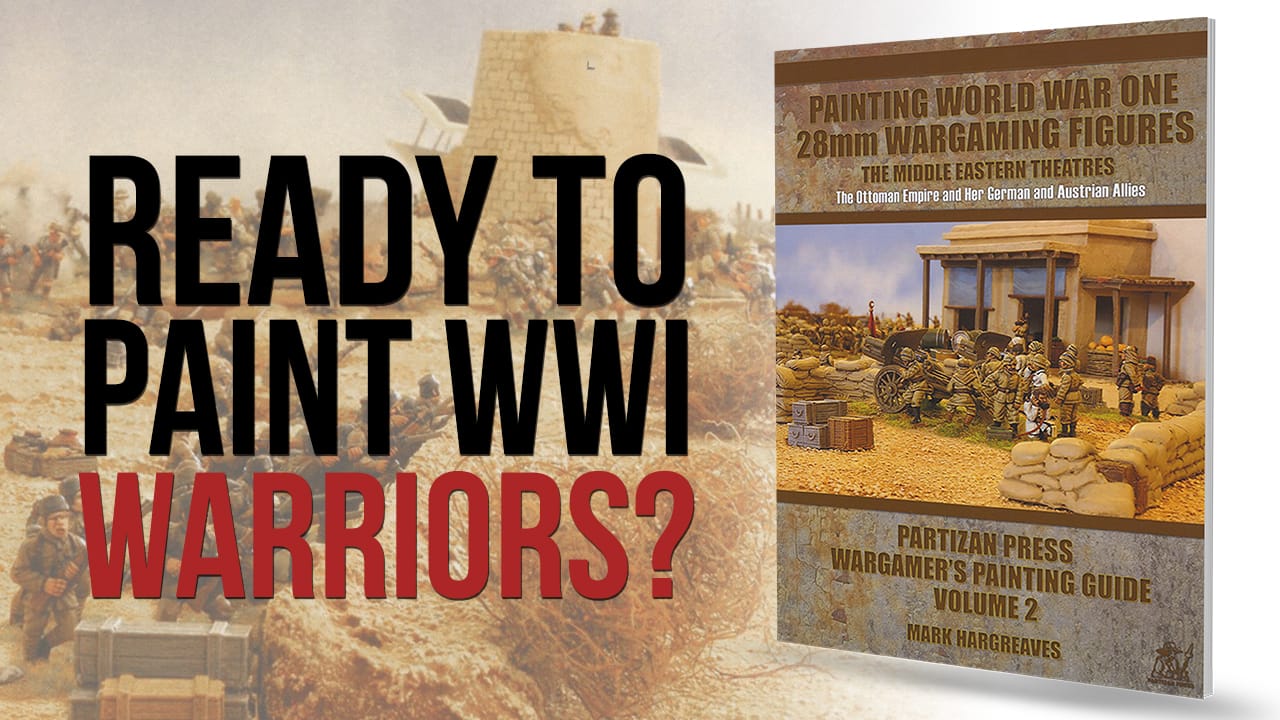 The second of the painting guides written by Mark Hargreaves, the Painting World War One 28mm Wargaming Figures: The Middle Eastern Theatres Volume 2 book serves as a wargamer’s guide to painting figures from the armies of the Ottoman Empire, Germany and Austria. This is an 88-page softcover book that is illustrated in colour throughout with a host of great photographs and covers a number of techniques from converting to painting.

The book begins with a brief introduction, and a homage to the author’s former ‘partner in crime’, now sadly passed on. The author also covers the main focus of this book, the fact that it is designed to aid wargamers with an established set of skills to put paint to their figures. Then we are straight into painting uniforms for infantry figures from the Ottoman Empire, with stage-by-stage photographs, captions, and covering the various uniform colours and styles. It also moves through the various troop types of the army, including cavalry, camelry and artillery.

After covering the Army in some detail, there is a nicely done section on the Ottoman Navy, somewhat brief but useful. These type of extras are typical of the series so far: part painting guide, part army examples and part conversion opportunities.

The next section deals with the painting of the German and Austrian troops which served out in the Middle Eastern theatre. Here, we have examples of not just painting uniforms but figures which may be used, converted or adapted to create a suitable force, using the author’s oft-mentioned, and perhaps universal concept, ‘wargamer’s squint’. The figures may not be exact replicas, but they are more than close enough for the tabletop.

Another useful section covers the painting of camels and horses, something of an art in itself. The stage by stage process here is somewhat longer than the others, which is complimented by a guide to the colours to be used during each process. A brief section on varnishing and painting your figures is next, perhaps the most important ‘finishers’ of any painting project.

Mark Hargreaves is a master of the quick conversion, and has provided a guide to head swaps, greenstuff use and the art of using ‘Instant Mold’ to create extra parts to add to miniatures. These are all explained simply and are far from beyond the capabilities of the average gamer, but can aid in creating the figures you want from the figures you have or can obtain. The book finishes with a guide to making your own paint washes and a list of useful contacts for the figures, painting and other pieces of kit used by the author.

This is another great book from a useful series that should definitely continue. Mark Hargreaves’ style is excellent, and none of the techniques explored are beyond anyone who has been wargaming for a while. In many ways, this is exactly what the gamer needs, a guide to getting the right type of figures onto the tabletop, with the benefit of a ‘wargamer’s squint’ and a comprehensive acceptance that ‘near enough’ can work.