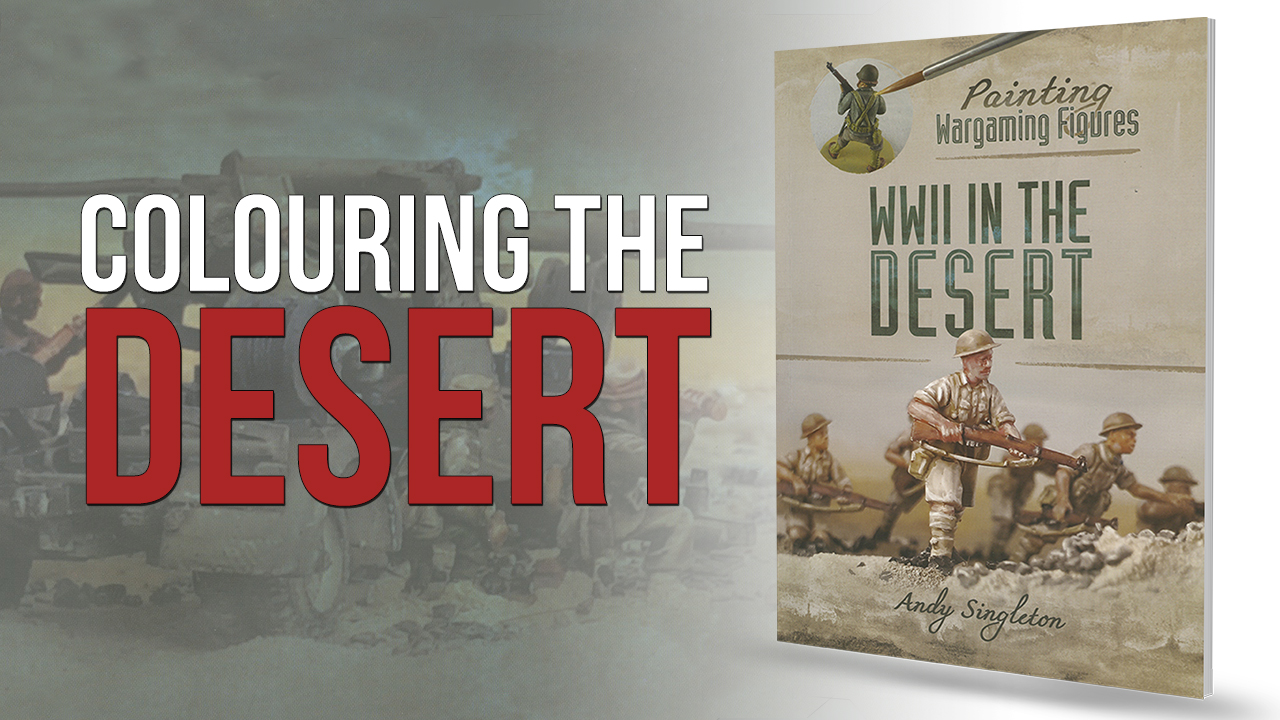 This Softback 158 page painted guide is the second in a series published by Pen and Sword and written by Andy Singleton, with the promise of more to come. Let’s begin flipping through the pages.

The introduction tells us about author Andy’s background and what the book contains i.e. a specific painting guide to four of the different forces involved in the Desert War of World War Two.

We then move on to ‘Part 1, Basics’ in which Andy tells us about the different materials figures can be made from, and the tools of the trade, like knives, glues and paints. It’s clear from this first section of the book that the author has a clear and easy style of writing – he knows what he’s talking about and he conveys it well. It’s so easy to read in fact that you forget about the annoying style-over-substance way in which the text on every page is aligned to the central gutter.

Different well know techniques are also covered in this first section like Dry-Brushing and layering.

We then move on to ‘Boot Camp’ in which prepping figures ready for the paint to be applied is covered. Again useful stuff and well written.

The first of our guides begins on page 37 and following a brief introduction we are into the ‘Conscript Level’ guide to painting the ‘British and Commonwealth’ or at least a sample of a Perry Miniature Desert Rat from that army.

All the guides are divided into Conscript, Regular and Elite. In other words: basic, standard and advanced level. So for each model covered you can follow one of the three guides, depending on your ability or time constricts, and produce a finished figure to differing standards. This seems like a neat idea and helps to sell the progressive – you can keep coming back to it – nature of the book.

Beyond the Perry British 8th Army Rifleman, we have an Italian Bersaglieri  veteran infantryman by Warlord Games and a Warlord US Rifleman. Before which switch scales to a 20mm Africa Korp soldier from the Plastic Soldier Company.

All these figures are dealt with in a similar way and if we linger on some of the pages for a while you will get the general idea.

After each of the ‘nation guides’ we get a general look at Camouflage Uniforms, which again Andy shows us how to paint to three different standards.

We have a lovely clear basing guide at the back of the book, something the author considers “the single most critical step of the entire process of painting a figure”.

Before concluding with a List of Manufactures of Desert War figures.

There’s clearly no better way to review a painting guide than by following the instructions therein and producing a coloured-in figure, and that’s something we’ve not done in this video, so I will reserve judgment in the form of a review of ‘Painting Wargames Figures World War Two in the Desert’  and just say that as you can see from this flipthough, it’s a well written, well photographed book and as we don’t need to worry about the economics of producing a book for a niche-within-a-niche i.e. World War Two Desert War Painters, I will conclude by saying if you want to paint Desert Rats, Africa Korps plus Americans or Italians in North Africa, you can’t go far wrong with this book.