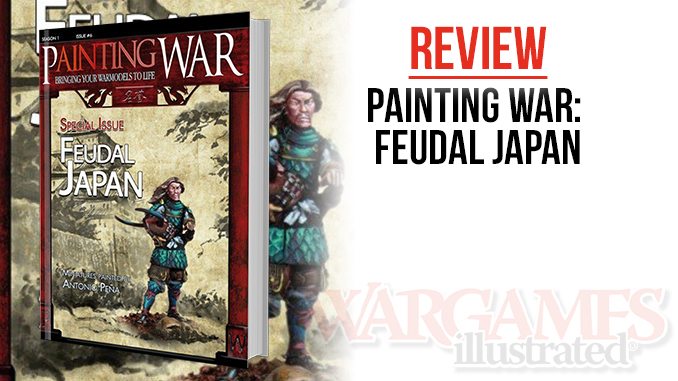 When it comes to painting my figures, I like to think I get them up to a decent wargames standard. However, for skirmish gaming with a small band of 28mm figures, I want to paint to a higher standard, as I suspect many gamers do. My latest purchase of a set of rules is Daisho by The Ministry of Gentlemanly Warfare, and I bought the Bushi Bantai box of miniatures from North Star Military Figures in their Ronin range. What I needed though was a guide to painting the little characters, to do them justice. But cometh the moment, cometh the painting guide in the form of the routinely excellent Painting War series of magazine-books, translated from the Spanish original and available from North Star Military Figures in the UK, the latest of which covers Feudal Japan.

The book is neatly split into two sections. The first is a general painting guide with Antonio Peña leading us through the basics of painting, from priming through to completing the details. Along the way, we learn how to paint faces, hair, armour, trousers, and how to paint red, among other things. Peña follows that with a guide to painting horses, decorating bases, and a useful colour table. He concludes this section with a historical overview of some of the period and a guide to the main weapons and clans. So far this is all quite generic, though extremely interesting and useful. It is in the second half of his book that Peña demonstrates his considerable talents to the fullest. He addresses individual figures in 39 ‘file cards’ ranging from various Samurai warriors, including mounted warriors and a female Samurai, to other types of soldiers, civilians, and even a big, fat sumo wrestler. All of the files incorporate painting guides to build onto his basic techniques, handy tips, and little, historical vignettes.

Only the pickiest of reviewers could fault the visual presentation of Feudal Japan. The graphics are quite superb and the colours crisp and clear. Peña is obviously a master at his craft but he is also evidently an excellent teacher. His instructions were easy to follow even when doing so highlighted the immense gulf in talent between the maestro and I. However, though I might never reach Peña’s standard, he provides a wealth of wee tips that I can use in my own work. What prevents Feudal Japan from reaching the dizzy heights of a perfect recommendation is the accompanying text to go with Peña’s superb painting. It would be charitable to call the writing quality patchy. Indeed, at times it is abysmal with poor flow, spelling errors, and typos. While that might sound unfair for what is after all a translation, the poor quality of the writing does have an impact at least for some of us. Nevertheless, my surmise is that the vast majority of those who buy Feudal Japan will not be doing so for a good read: they will want to learn to paint better. By following Peña’s advice and his techniques they can hardly fail. That makes this edition of Painting War an essential buy for gamers and figure collectors of the feudal Japanese.