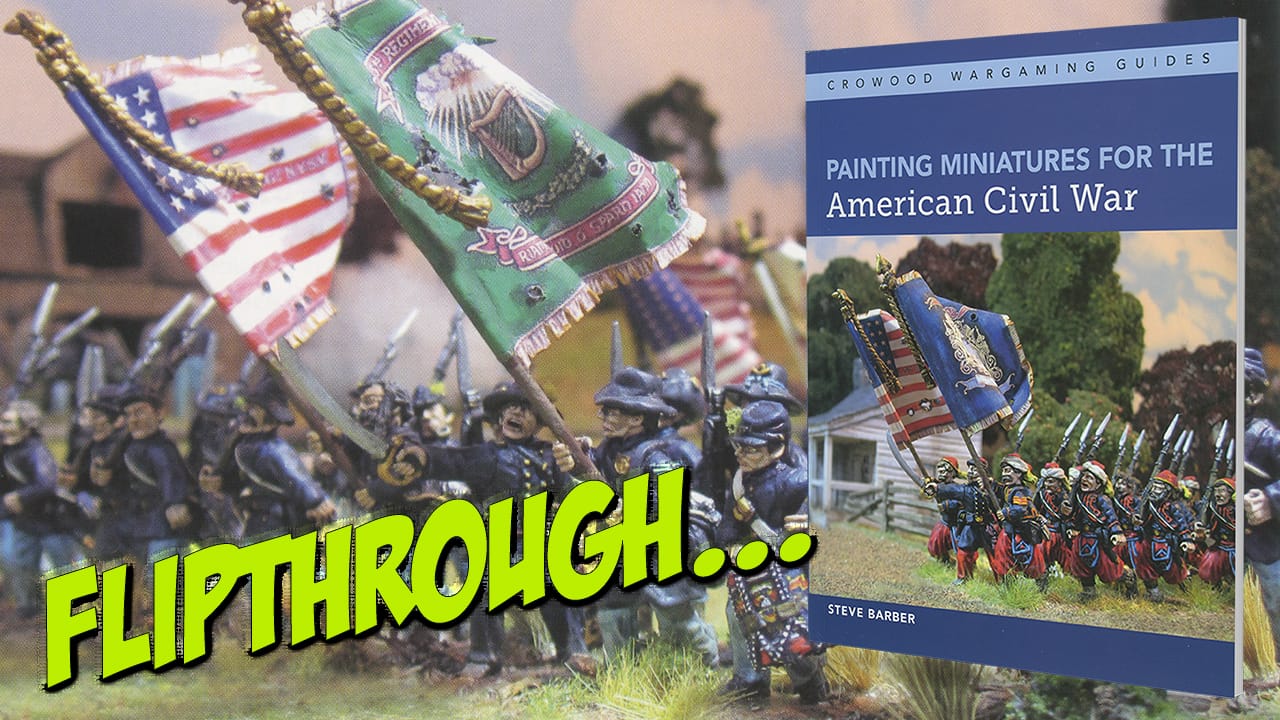 The Painting Miniatures For The American Civil War book has 143 pages and has been written by Steve Barber, published by Crowood Press. It is intended as a basic guide to a range of painting and basing options, with plenty of helpful hints and photographs to aid the overall process.

After an interesting preface, the book begins with the basics of choosing miniatures, preparing them and making sure that your choice of paints, and painting area, aids the overall process.

The second section focuses upon layer painting. The paints used are highlighted, and the focus is upon a 28mm Union Zouave figure, with text and photographs of each of the twelve steps used. This is done with plenty of clarity and reference to colours, plus some useful focus upon a couple of notable Zoauve units of the period.

The third section explores the painting of figures using washes. This time, the figures chosen are a 28mm Confederate Infantryman in the first instance, followed by a 10mm version. This is a painting style I know very well, but Steve does a good job of taking us through the various stages. Interestingly, he paints in reverse to my own style, adding the basic colours to each place, then adding the wash, working from the ‘outside in’ rather than from the areas of flesh outwards.

The guide to painting the 10mm scale figure takes a similar approach, but obviously is less detailed. The aim is to produce a whole regiment of troops who look good all together, rather than the individualism of the 28mm figure. The final photographic example here is a 28mm artillery piece and crew.

Having dealt with the basic skills and shown them in action, Steve moves on to discuss mixing the layer and wash effect together. This will be a new set of skills to most, but it’s interesting to see how they may be used on ACW figures to get the ‘best’ out of them. The mixed styles are clearly defined, with each aspect being described and shown via the text and photographs.

A nice touch is when Steve highlights his mistakes, then shows how he solved the problem. The summary section is nicely done and the examples of figures at the end of the section make for a usfull conclusion.

Section 5 deals with the slightly daunting subject of painting horses, in this case the different colours and approaches which may be used. Many people struggle with some aspects of painting horses, and everything here is very useful. Again, there are plenty of images to support the text – taking the usual stage-by-stage approach. The examples used at the end of the section are for mounted generals, a common sight on ACW battlefields. I would have liked to see a method for painting units of cavalry ‘en masse’ however.

Painting artillery pieces is covered in the next part, again something that benefits from a stage-by-stage process. Dry brushing is outlined, as is the use of washes. The emphasis is upon speed and detail, with some attempt to make suggestions on how to finish the pieces off.

Speaking of finishing, section 7 looks at applying suitable varnish, basing material and extras to add more to the look of your figures. The ideas cover the various types of varnish effects, styles of bases, buying and making your own grass tufts using a ‘Flockbox’, and the various flags on offer to add extra ‘color’ to your units. Individual basing is explained in eight easy steps.

Having dealt with ‘standard’ figures, there is a guide to converting figures to your own requirements, the relevant tools to use, and explanations of the most easily achieved methods. There are also painted examples of some converted figures.

The last ‘bonus’ section focuses on scenery and buildings, in terms of working with MDF, resin and additional tips to paint fences and walls. Sections 8 and 9 are just the type of thing that a beginner may need, whilst adding helpful hints for everyone.

This book covers a whole range of useful techniques for making the most of your figures. The majority of the book focuses upon 28mm figures, all taken from the excellent range produced by the books author Steve Barber. The step-by-step approach makes each stage simple to understand, and the conversational style of the text, alongside the photographic examples, manages to instruct and inform whilst remaining accessible. A useful book, for those already into the ACW or looking to start a new period.