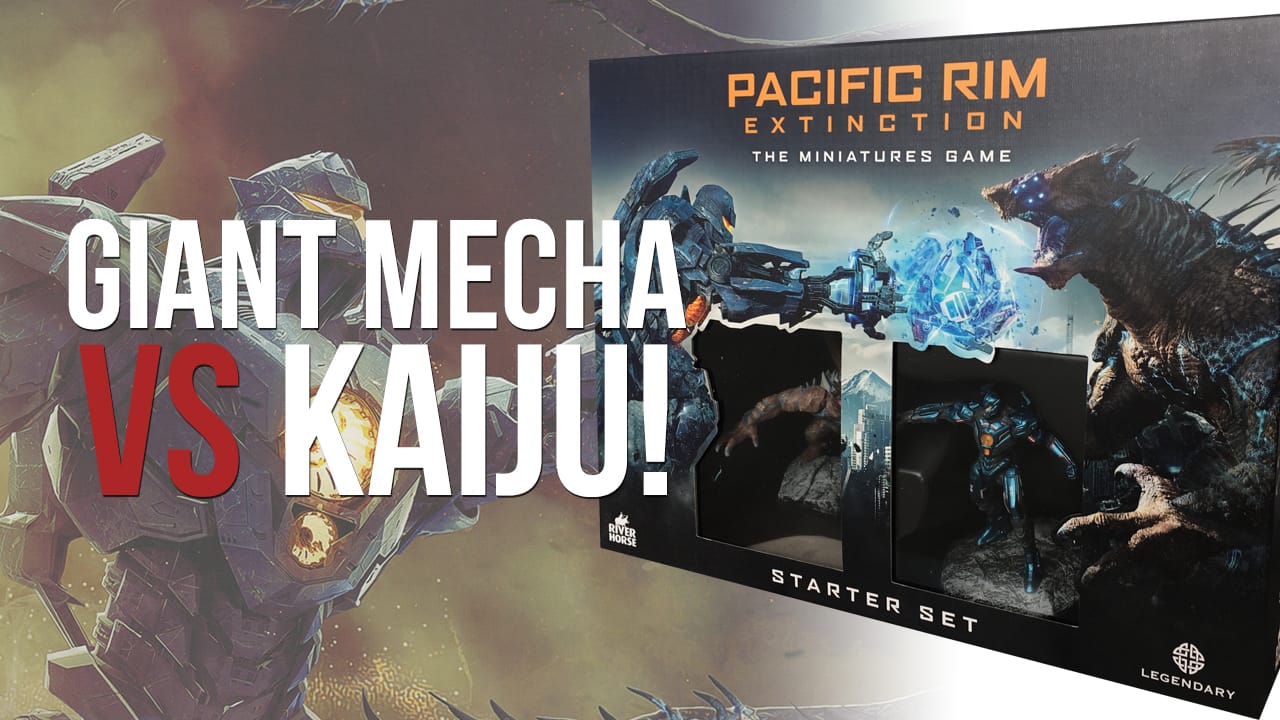 River Horse, current kings of the licensed miniatures game, have begun to deliver one of their Kickstarted games, based upon the Pacific Rim: Extinction movie. The game arrives in an impressive looking box, complete with two ‘windows’ that show off the two pre-assembled, pre-painted miniatures.

The sturdy box surrounds a plastic tray, in which may be found miniatures of the giant Gipsy Avenger piloted mecha suit and an alien kaiju or monster. These are pre-assembled and painted plastic figures, on sculpted bases. The quality of the plastic used on the figures is good, and the overall standard of assembly is well done. Some of the colour matching between paint on different parts of the figures is slightly ‘off’, but the overall effect is spot on. In addition, the tray has 16 dice, 15 blue with various symbols on them and one black.

Lifting the tray, we come upon the game cards. The smallest sized cards are for the Gipsy Avenger, and represents the operators and special equipment and weapons that may be used by this Pan Pacific Defense Corps mecha. The more playing card-sized red cards are used by the kaiju monster, with different types of attacks and defence options. Lastly, the largest cards are the scenario or mission cards, which outline the table set-up, deployment and special rules for each game.

The rulebook is next, a 31-page softback book. The layout of the rules and use of pictorial examples is excellent, with plenty of spacing to aid understanding. The background to each page has a touch of blue, which could aid those with vision issues, although the size of the font used is a little small at times. In addition, there are some great photographs and art from the movie, which really add to the overall look of the book.

A double-sided paper game mat is beneath the book, with one side representing what looks like a partially destroyed city landscape and the other looks like what appears to be the ocean floor, complete with a sunken wreck. Next comes a character or profile card for each of the figures in the core set, with space to place upgrades, mutations and attack choices as per the action cards. Lastly, there are 7 punchboards, on heavy card, of scale 3D buildings, tokens, 2D terrain pieces, movement trackers, and more. Many of the terrain tokens are double-sided, with cityscape on one side and undersea terrain on the other.

Overall, this is a well packaged core set, which comes from a company known for meeting the needs of gamers and movie merchandise collectors. The game play seems simple but nuanced, and, let’s face it, who doesn’t want to re-enact battles between giant mecha suits and massive kaiju monsters?