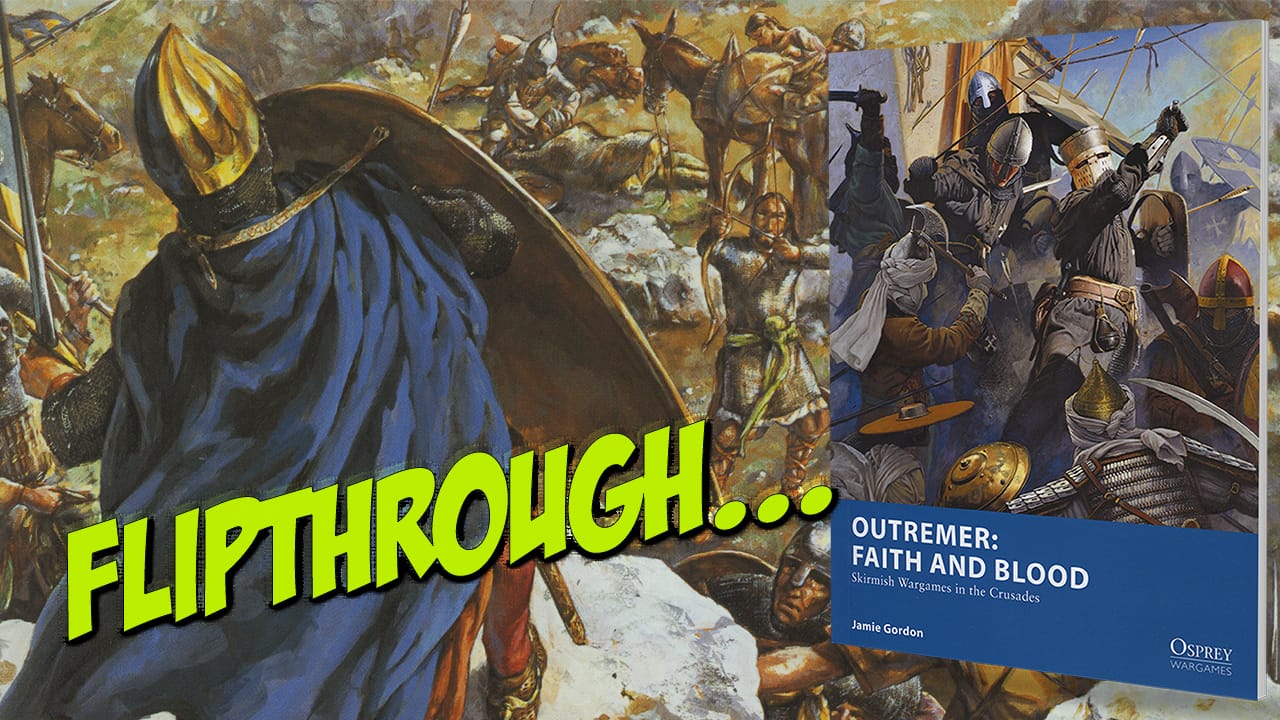 The new Outremer: Faith and Blood rules from Osprey Games plunge your chosen characters into the chaos of the Crusades. This skirmish level game pits warband against warband in the small scale combat that took place between the set piece battles of the era.

In terms of scale, the game is focused around small warband level skirmishes. Consequently, you only need between 3 – 13 25 – 28mm models to take part. Here every single model is an individual character of some stripe and each fighter’s actions has an effect on the final outcome of the battle. This is a game of individual heroes leading small bands of fighters to secure victory against insurmountable odds; Outremer: Faith and Blood was written to give players an opportunity to lead a small group of warriors to glory in the name of their God. All resolved within 45 to 60 minutes of gaming.

Within the rulebook there are three distinct factions for players to choose their warbands from and each of these has its own advantages and disadvantages that a shrewd commander will need to utilise to best effect in order to ensure both victory and glory. The Saracens are fast moving fighters who are acclimatised to the terrain and climate of the East and their rules reflect this. Whilst they may not be as hard hitting in melee as the Franks their ranged capabilities are noticeably more effective. In comparison the forces of the Crusaders pack a real punch in close combat but they lack the manoeuvrability of their Eastern foes. Finally the warriors of the Military Orders are an elite powerhouse and even their most basic fighters are well-equipped and highly trained… however they are invariably outnumbered which can be a real weakness.

No matter their faction, each warband is constituted from three key types of fighter who each follow distinct career paths that allow them to fill unique battlefield roles. Firstly there are those warband members on the ‘Leader’ career path; these are individuals who as the name suggests provide the command element to your force and whilst they are proficient fighters they are also able to provide support and guidance to nearby troops. It is possible (and indeed advisable) to have more than one model on this career path and the most senior of these will be your Warlord/Commander.

Next up are the ‘Warriors’; these are the rank-and-file troops that make up the majority of the warband’s fighting strength. When initially recruited these individuals tend to be poorly skilled and equipped but should they survive enough battles they can grow to be exceptionally potent. For example they may choose to specialise as swordsman or archers in order to fill specific roles on the table, or they could gain a trade (such as a merchant or blacksmith) that will give your force access to improved weapons, equipment or revenue streams.

Finally there are the religious men, these individuals tend to be mediocre fighters at best and won’t usually have the prowess to duke it out with professional soldiers; however they are real combat multipliers and their presence can help drive up the skills and durability of other members of the warband.

The game itself runs slightly differently to most other games on the market in order to reflect the reality and confusion that can surround small groups of men butchering each other in close quarters. Rather than a more traditional ‘I-GO:U-GO’ system of turn-taking, the system uses a card driven system devised by the author. Each player’s warband is allocated a suit from a standard deck of playing cards at the start of each game and then each of their models is assigned a card from that suit. Once all models have been assigned a card these are collected together and shuffled; this is called the activation deck. At the start of each turn a card is dealt from the activation deck and the model this card is assigned to is able to take two actions (either Move, Hide, Shoot, Melee, Rally Rest); once these are completed another card is drawn and the model assigned to this new card may complete his two actions and so on. This mechanic adds a real sense of suspense and uncertainty to the experience. Commanders need to be careful with their actions and think through their choices thoroughly; whilst a bold move could secure them victory it could also lead to absolute disaster if their card doesn’t get dealt until later than they had hoped for.

The rules also attempt to reflect the different capabilities of weapon systems. Therefore some weapons are naturally easier to handle and score a hit with (such as a sword) whilst others are much harder to use effectively but when they do hit they are devastating (i.e. a massive two handed axe). Also, in Outremer, a fighter in heavy maille armour is certainly far more durable than an unarmoured model but his speed and overall manoeuvrability is heavily impaired; all decisions have consequences in Outremer.

Faith also plays a key part of the game’s mechanic as that’s why many men fought in these campaigns. Faith fills the role of morale tests in the game for things such as the rally and routing procedures (as you would expect); but it also has another unique feature. In relation to melee combat fighters will need to pass a modified Faith Test to charge their opponents, for hardened fighters this will be fairly easy but for raw recruits this will be more challenging to achieve. This makes sense; after all if you asked a veteran Saracen warrior to engage a peasant armed with a pitchfork he’d probably be happy to do so, whereas if you asked a Saracen peasant to charge a fully armoured Templar Knight mounted on a gigantic destrier he may be far more likely to be reticent to oblige.

Whilst the game comes with the capability to facilitate one-off battles, it is really designed to be played as a campaign system, and it comes into its own when used in this manner. A big part of the experience is for players to watch proudly as their warband grows and develops its own unique flavour and story over the course of a series of linked battles. At the end of each battle whether a player has lost or won they will still have an opportunity to see what happens to the men who have fought for them on the field of war. Most warriors will gain experience of some sort and this will allow them to learn new skills and specialisations that will make them better fighters for the next confrontation. The warband may also earn some revenue that can be used to either hire new recruits or buy better equipment. On the down side those fighters who have sustained wounds during the battle may well end up suffering lasting injuries that reduce their overall combat efficacy or in the worst case cause them to succumb to their ailments and perish. Thus a wise commander will need to marshal his resources to best effect whilst insuring particularly valuable warriors aren’t exposed to unnecessary levels of risk during a game. There are six basic scenarios included in the game, which can be played out individually or linked together to create a narrative. Players will soon find that every decision in Outremer both on the battlefield and during the wider campaign setting will have consequences… just like real life.

These rules have a number of innovative ideas and a firm grounding in fast but detailed play. The opportunity to create a band of individual characters rather than faceless warriors has a large appeal. The narrative campaign style of play allows for players to make a commitment not only in terms of buying and painting figures but also converting miniatures, crafting a background and charting the progress of their carefully constructed characters over the course of a number of gaming sessions.