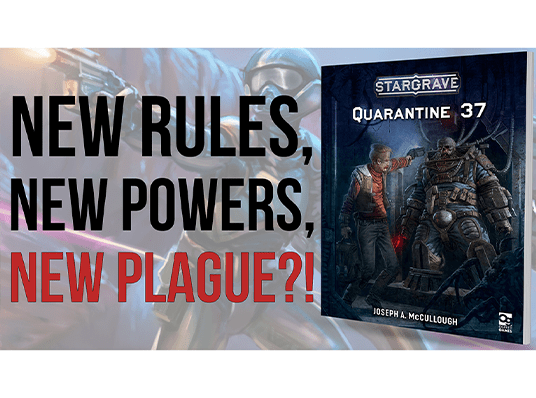 The paint’s barely dried on our Stargrave crews and there’s already a new supplement, adding exciting extras to the already popular sci-fi skirmish game that was released in mid-2021. This 96-page, full-colour book takes your initially galaxy-spanning gaming to a singular location – Imperial Research Station 37 – formerly a hive of activity holding ten thousand scientists and researchers, now an abandoned and dangerous location with all kinds of plague-infected dangers and bugs inside. Let’s don our space suits, pack a good supply of hand sanitiser, and plunder some technology!

The text below is a video transcript for those who prefer to read rather than watch.

Joseph A. McCullough’s introduction describes how Quarantine 37 puts Stargrave’s focus onto sci-fi horror, a topic we think is well suited to skirmish level gaming. Unable to decide between unrelenting hordes of ‘plague zombies’ and deadly ‘alien bugs’ he’s decided that Station 37 has more than enough room for both. Each option gets its own mini-campaign and, thanks to the very divergent types of antagonists involved, these have a distinct feel.

As well as the scenarios that make up the new campaigns there are new crew options (with extra backgrounds, powers, soldiers, and rules), simple rules for solo-play (including a solo campaign), and more.

Bringing bonus backgrounds
The book’s first chapter has two new backgrounds to add to the existing ones in Stargrave. Aristocrats are wealthy individuals who, as well as having their own stat modifications and core power choices, provide financial benefits to your starting crew. An aristocrat captain lets you pick a free ship upgrade and provides an extra 50cr when you build your crew. A first mate aristocrat will gift you 50cr too; that could mean a hefty 500cr to start your crew.

Hunters are far more attuned to the creatures of the galaxy. They search out live animals to sell or kill and harvest for valuable pelts, scales, venom sacks, etc. If you choose a hunter background for your captain or first mate you’ll get some exciting new core power options.

I have the power!
There are eight new powers in total and for hunter players, Beast Call looks like a lot of fun. It allows you to roll on the Random Encounter table and place that model on a table edge. Combine that with the Control Animal power in the main rules and you can essentially summon and control beasts to ruin your opponent’s day. Aristocrats can use Contacts to increase the amount of Advanced Technology available to them or simply use Investments to gain 50cr. We can see Aristocrat crews having quite a bit of snowball potential in campaigns after spending their ill-gotten gains.

Perhaps you will use the extra credits to treat yourself to some of the new soldier options: gunfighters dual wield and can deal out serious damage; robot mules have four gear slots, can haul loot with no penalties, and can pass gear to friendly figures; Q-bots are designed to obtain loot; Ravaged are scarred survivors of Hastian’s Plague who feel little pain.

New rules and the horrors of Hastian’s Plague
What is Hastian’s Plague? It’s the ‘Z-disease’ that is spreading through the galaxy, eating away the hosts’ brains and reducing victims to violent, mostly mindless husks … so zombies, basically. The optional ‘Infection’ rule brings potential zombification to your own crew in a very entertaining way. Any crew member who has taken damage from a creature with the Zombie Infection attribute in the previous game is at risk – your opponent can pick one of these crew members and if they fail a Will Roll they will be replaced by a plague zombie. This means that the best-laid plans can go awry as the model key to your strategy suddenly becomes an uncontrolled creature in the midst of your crew. There’s also a Reanimation optional rule that can bring the dead back as a plague zombie.

The final new rule is Pings, which represent the tension increasing pulses you get from a motion-tracker in the best horror sci-fi worlds. Pings are tokens that get revealed when they move into contact with a crewmember, at which point a roll on the Ping Table will launch something horrible your way. This mechanic brings tension to the Strike from the Shadows scenarios found in the book’s Alien-like campaign. A ping could be a meagre Worker Bug but if you’re unlucky three Warrior Bugs could decimate your crew.

The Shuffling Dead
Chapter three is the first of two competitive mini-campaigns in which up to four crews can participate. This zombie-themed group of four scenarios will work best if you ditch the game’s standard playing areas and build a ‘dungeon’ setup of interconnecting rooms and corridors. It’s tense stuff, beginning in a medical lab with pods that spawn zombies into the battle; moving through the station, dealing with dangerously damaged conduits sending out radiation, power spikes, and explosions; and finishing in the cargo bay as you attempt to escape in shuttles, fighting through a fluctuating containment field. Mr McCullough has a knack for mixing a cool narrative with neat gaming extras and this final battle is a great example of that, full of tension and (hopefully) an eventual triumphant escape.

Strike From the Shadows
Deeper into the station, the second campaign’s all about those aforementioned ‘pings’ and the ‘bugs’ they represent. The first scenario – Hydroponics – has a smart mechanic that will bring terrors down onto the tabletop. The losing initiative roll each turn gets cross-referenced with a table; should the roll below you’ll encounter something relatively safe – place a bug or ping – but if you’re unlucky enough to lose the initiative with a higher roll … the shadows do hide some horrors.

The scenarios here are an action romp! From the flooding hydroponics chamber, onto a train, out of that train after it crashes, before a final climactic … we don’t want to spoil the fun, but we greatly enjoyed the progression and escalation.

All by myself!
There’s usually a whole lot of space needed to describe how games successfully (or in many cases unsuccessfully) translate their rules to solo play. Not so with Stargrave! Things are kept basic and the introductory paragraphs suggest that your gaming will require “a lot of player creativity”. That’s game designer talk for “this is more guidelines than anything else” we reckon and that’s no bad thing – it puts the agency in player hands; the fun is up to you!

Quarantine 37’s solo gaming focuses on player versus environment; that means you’re focused on working through the campaign provided. Build a standard crew (only half of them get used in the first two scenarios, so you can learn the nuances of solo play), avoid some powers as they’re redundant in solo play, and use loot as the simple way to determine ‘victory’.

The turn sequence is altered with the Creature Phase landing between the Captain and First mate Phase. This makes the monsters far more dangerous, and it is a simple tweak that works well.

The solo campaign – Back to the Ship! – is big on drama and takes your crew through some cool set piece actions that work very well when playing on your own. It’s never going to be as much fun as pitting your wits against another human but if you want to roll some dice and push some minis around, why not give it a go? The suggestion to play these solo games cooperatively is a good one too and something we’re tempted to have a go at.

Tech and beasties
The book ends with twenty new advanced technology options and a bestiary of bugs and zombies that dwell on Station 37; these have various unique attributes, from acid spew to self-immolation! Add in some varied and vibrant art, some good-looking North Star figures, and you’ve got a great new Stargrave book.