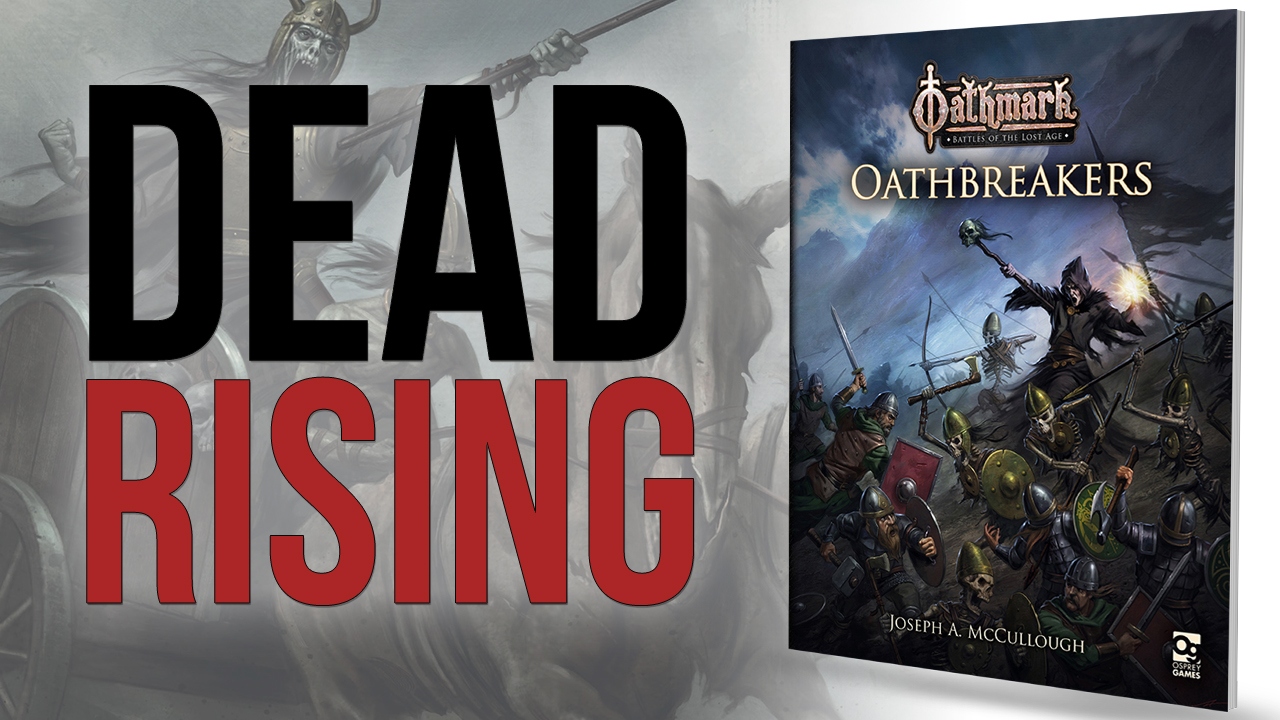 We’ve got Oathbreakers in our grubby mitts and we’re going to give it a damned good flipping! This book, the latest supplement for Oathmark: Battles of the Lost Age, is a full-colour, 82-page, softback offering. Published by Osprey Games, the quality that we have come to expect from them is present. Oathbreakers’s fantastic colour illustrations boost that “ooh!” factor up too.

This finely rendered and certainly spookily themed art should clue you into the content. Oathbreakers casts its gaze over the undead, bringing veritable hordes of them to the mass-combat fantasy game.

The introduction provides more detail on what’s ahead and is laid out with black and white art, a photo of an ‘in-game plus’ setup (units in combat with a background and lots of scenery to make them look extra nice), and a full-page piece of art. These elements continue throughout.

Undead Armies begins on page 8 and this chapter focuses on the dead … well, the not quite so dead anymore! Rules for creating undead kingdoms (or adding undead to existing kingdoms) take up the first two pages, then it’s onto the undead units themselves and there are quite a few.

They are tied to the different terrain that makes up your kingdom – your first-choice is should you make your capital is a Necropolis or a Cursed Burial Ground. Necropolis? Then say hello to the Revenant King, who serves as a cursed leader and a walking dead example of why even royalty shouldn’t break oathmarks in their life! Pages 10 to 13 cover the King as well as Princes, Generals, and Captains, finishing with a great image of one riding to war in a chariot (another new option in Oathbreakers).

While we show you other troops, Champions, Warriors, Linebreakers and Cavalry – all representing elite type undead units and options – we’ll mention that though these are the ‘good at hitting folks while looking rather dead’ type of troops the rules make it clear that they don’t have to be acting on pure evil – a Revenant King and troops may be out to make amends for the oaths they broke in life, rather than just wanting to destroy all. We like that Oathmark doesn’t stick to a boring black and white, good versus evil approach.

On page 17 there’s more great art – a Necromancer raising the dead. This stuff really does add atmosphere and quality to the book and gives us a chance to mention that:

– Author Joseph A. McCullough’s no stranger to getting fine art in games – we flipped through Wizard Eye: The Art of Frostgrave recently – a huge and wonderful art book for his previous game series Frostgrave.

– The art serves to illustrate the undead where the miniature and battle scenes do not. There are Oathmark Undead miniatures on the way, but we suspect they weren’t ready when this book went to print. That makes for some dissonance. Yes, it’s great to see photos of models in combat, but it’s strange no Undead are in these battles. A bit of a negative in a mostly visually great book.

– And we should probably also mention that author Joe is a friend of the magazine; he sometimes provides us with articles – this won’t stop us being critical if needed, as the above hopefully shows, but we wanted to mention it.

Anyway! Necromancers! An option if your capital is a Cursed Burial Ground, this is where death magic comes in, with their necromancy giving these dubious looking folks the power to raise up shambling hordes of the dead. With the level 5 Necromancer weighing in at a hefty 400 points they can be skilled spellslingers (and we’ll get to those spells later). The rules for their hordes follow – various skellies, ghouls, wraiths, the fantastic sounding corpse fires (so consumed with hatred, anger, and pain they self-immolate – in 2020 we can relate!), vampires, barrow worms. It’s a lot of options and should make for some really awesome looking armies.

But enough of the dead – onto living legends! Page 28 is the start of the Legendary Heroes section. This takes Oathmark’s powerful characters a step further, shining a light on the absolute best of the best. This pretty much means that in-game you’ll be able to bump up your models to another level and they’ll gain heroic traits – special abilities that will let them counter normally restrictive rules. So far so rather normal. But, reflecting the author’s fondness for narrative, you can gain experience by performing heroic deeds through battles, staying in play, winning, and even just taking part in the fight. This could mean gaining extra heroic traits! Or, flipside, you can get killed, captured, or wounded, which is less ideal!

Joe also adds that though legendary heroes are written to work as an individual system, they can be used in conjunction with the battle honours rules that are in previous expansion Battlesworn. Do you fancy building an uber-unit – a legendary hero leading from the front rank of a unit that has battle honours? Well, if you have the many points to spare, you can!

At page 42, Military Expeditions adds three military expansions that can be added to the main Oathmark book’s campaign system. These have some spooky touches that make them fit into the undead theme of the book – each expedition consisting of three different scenarios. With Lockdown 2 hitting here in the UK we’ve not had a chance to play, but on paper they look varied and fun.

And segueing nicely from our mention of Lockdown 2, Pages 62 to 65 of this book show the Strange and Catastrophic Events tables that are used when playing the previous expeditions.

The book’s final 20 or so pages are an Appendix that is bursting with new excitement. It covers the new and unique territories that can be added first, which all add character to the gaming experience. Next, on page 72, are new Special Abilities. Not too many but they’ll enhance the undead flavour. And finally, there are New Spells. Necromancers can choose from both the General Spells list and these ones; with the versatility to pick options that will degrade and damage the enemy, raise skeletons/revive revenants, or even summon an aggressive barrow worm to the fight, necros are truly fierce casters.

Oh, sorry, and finally finally! Tucked in after the credits, on page 79, is a legendary heroes sheet you can copy in order to create your own fighters and leaders to live on in the songs and hearts of the people!

Well, there we go, another fine expansion to the world and game of Oathmark, adding new army options to the game and helping us postpone the post-Halloween blues at least a little longer.