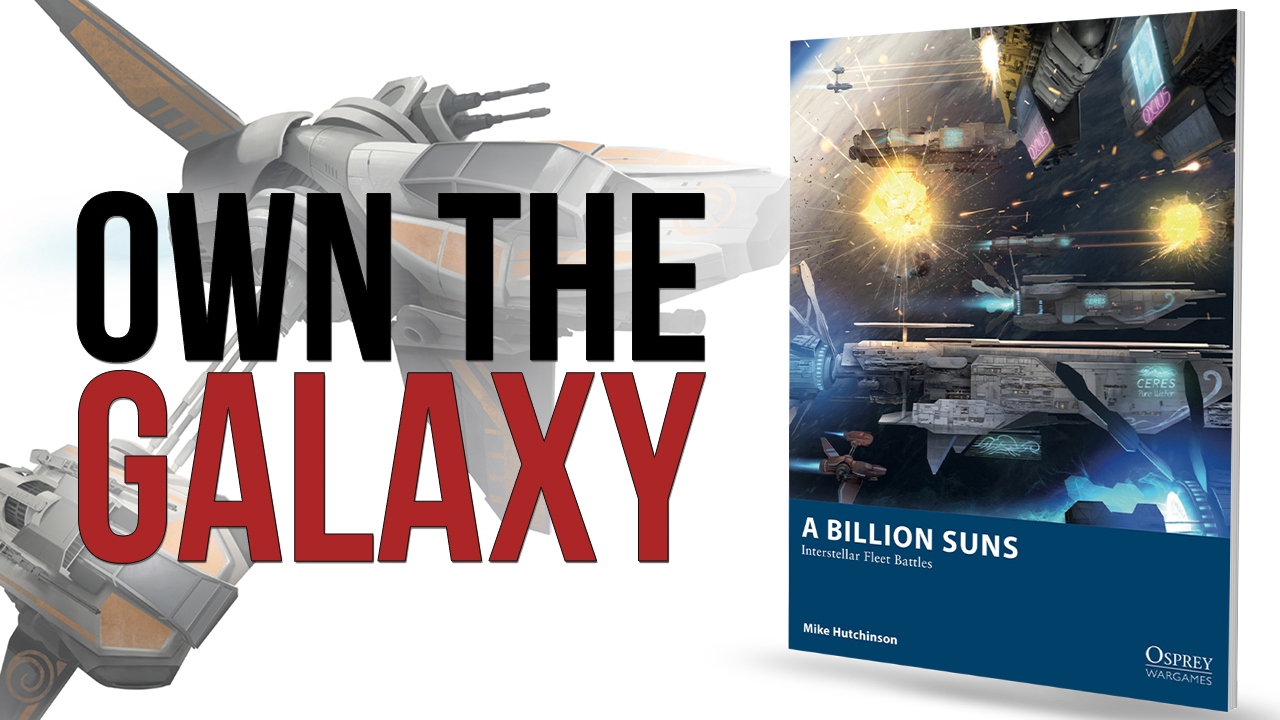 A Billion Suns is a new game in the Osprey Blue Book series, bearing the subtitle “Interstellar fleet battles”, and jumping into this galaxy through the power of the 64 softback, full-colour pages in its engine bay. The game’s the new creation from Mike Hutchinson, whose first game, Gaslands, turned into a bit of a wargaming behemoth after its release.

The introduction to Mike’s new, sophomore effort, begins on page 4. A piece of flavour text makes the setting of A Billion Suns extremely clear – it is a far future of space exploration, where battling corporations try to stamp their ownership on distant and financially viable space systems. That’s a future we’d say is a pessimistic one… but with the present day’s least favourite mad scientist billionaire currently setting up the spacefaring wing of his empire… maybe it is horribly feasible.

The timeline after the intro text takes us from 1969’s moon landing all the way to the far future of 3120 and close to a billion stars have been registered and claimed.

After some more narrative McGuffins (and good ones they are too) we get to the game itself; Mike’s opted to start things out with a pre-rules tutorial. This Basic Training starts on page 6 and in two pages it gives a good impression of what the game’s about. You will get playing and learning instantly, without feeling confused or overwhelmed. A great start!

As with other Osprey books we’ve looked at lately there are pages of feature art between some of the sections, in the shape of fancy space vessels here! These add some visual grandeur to a book that is otherwise functional and perhaps a tad sparse.

What You Need to Play goes through… well, what you need to play! Some pertinent details (that we will get into more later) are that games play over multiple boards at once and the rules have been designed to work with whatever models you have. You’ll need a variety of dice too – 6s, 8s, 10s and 12s. Playing cards are used to represent contracts, and there are various tokens included in the book but also downloadable from Osprey Games’ website if you want to keep the pages pristine.

Spaceships are covered next. Referred to as ships, even when multiple smaller craft may be the ‘ship’ in question – a Bomber Wing, for example – these have a position (the model’s centerpoint) and heading (where it is facing). With these simple basics the game can fit any kind of space faring model into its rules.

Ships get formed into battlegroups – consisting of the same class of ships – and these are activated together. A chart on page 11 lists all the classes and this is a wide enough range to encompass any kind of vessel you might want to bring to the battlefield, be it a 40k Battlefleet Gothic biggie, an X-Wing fighter, a strange gribbly alien biomass, or whatever else you feel like putting through its paces. The important factor (at least from a supply perspective) is the cost of each class, from 1 for a Recon Wing all the way to 40 for a Battleship. The more you spend the more you get in your ships, which consist of different elements in their profiles.

Mass is the bulk of your ship and impacts various rules. Thrust is how many inches it can move in one ahead action; silhouette reflects not just the physical but also the energy signature size. Shields are the protective elements your battlegroup has, and the weapons… well, they make pew pew noises and cause other ships to go kaboom (unless you prefer realistic sci-fi where in space no one can hear you scream, let alone distinguish the sound of beam weapons causing untold destruction!)

Page 12 brings us to the Core Concepts and starts with dice details – low rolls are good and the highest possible roll will always count as a dud, even with a modifier. Measuring is done from the centrepoint of ships, pre-measuring can be done at any time, and – offering some tactical flex in game – when measuring the distance to and from a battlegroup, you can use the centrepoint of any of its ships.

Other things are covered but they are getting a bit too granular for this overview. Suffice to say, it’s a thorough offering and reinforced by box outs down the side of the page, highlighting key concepts, info, or suggestions.

We can’t skip over the basics of Scale and Credits though as they are a core element of gameplay. The larger the scale the larger a game will be. The more credits the players (or CEOs as they are called) have to purchase their forces. And this is where we need to take an aside, briefly, because this is one of the most fascinating elements of the game.

You don’t choose a full force pre-game – each turn CEOs buy up the ships they need and jump them into battle. This spend will decrease your overall number of credits and may even put you into a deficit. But, as all good CEOs know, you’ve got to speculate to accumulate, and by focusing your spend in the right area at the right time, you’ll have a better chance of securing objectives that will boost back your final credit. Lots of risk reward here!

But now we’re back to the book – page 15 and Playing the Game.

Starting a game is simple – CEOs randomly generate three contracts (the objectives), agree on game scale, then get things get set up. Gameplay itself consists of multiple rounds, each one containing a Command Phase, Jump Phase, Tactical Phase, and End Phase.

As with many games it’s easier to play and learn than it is to listen to some random on the internet try and describe rules, so we’ll try and keep this pretty simple.

The Command Phase involves assigning tokens to slots on your Helm card – imagine you’re some evil corporate overlord, sitting in a leather chair that cost more than most folks make in a lifetime, and you’re directing vessels from afar. You do this by assigning CMD tokens. The number of tokens available is the game’s Scale + 3 (so for your first game, at the suggested scale of 3, that’ll be 6 CMD in total).

These CMD tokens are, essentially, an alternative credit system you must also balance – spent to boost what you can do in the different Phases. You will need to strategise carefully here.

If you put tokens in the Seize Initiative part of your Helm you can spend them to roll with a lower dice when determining who will have the initiative next phase. If you put them in the Jump In part of the Helm you will have more resources so will be able to bring more ships to the various play areas, and tokens in the Tactical Helm will let you give more command options to those ships.

A Billion Suns is a game about juggling chainsaws and balancing plates, all at the same time, and without pushing too far and making a gameplay jester of yourself.

Once into the Jump Phase players spend their assigned CMD tokens to requisition and deploy jump points – spots where your ships can join the board – or to deploy battlegroups at the jump points. These battlegroups are chosen at deployment from all the available ships, making for incredibly flexible options and truly dynamic games.

There are neat mechanics all over the place, too many for us to cover here, but even stuff like jumping has quirks. Battlegroups deploy within 6 minus M” of a jump point, with M being the Mass of your battlegroup. That means titanic vessels will appear close to the jump point but a swarm of ships, like a Fighter Wing, with a Mass of 0, can deploy with more versatility and distance.

The Tactical Phase is where you will do your manouvering and fighting and it’s covered through a good bit of the rest of the book. Before we get to that though, how does the game end? Well, once two contracts are exhausted at the end of a round (meaning no more credits can be made from them) that’s it – the game ends. Victory is determined by which player has a combination of the most Positive Credits (leftover from requisitioning Battlegroups) and Highest Credits total (earned in-game).

But back to the activations, which happen on a per-battlegroup basis. CEOs issue an order – either Vector, Engage, Red Alert, or Jump Out.

Vector allows an extra move action, Engage allows a battlegroup to choose a target and re-roll attach dice against it, Red Alert helps the battlegroup recover by removing damage, Jump Out lets them flee (without counting as destroyed) if they are close enough to a jump point.

These things all act as bonuses in the normal activation sequence and are more layers of modifiers that are easy to apply but bring extra decision making to proceedings.

Pages 20 to 21 cover movement – what you’d probably expect – ships pivot and thrust and if it pivots more than 90 degrees the Gs stop it attacking with its primary weapon.

After that Passive Attacks kick in – akin to overwatch, any passive ships that now have the active one within range and arc of their auxiliary weapons may attack. This adds further consideration to move actions as it not only brings a risk to the moving battlegroup, but rewards astute placement and facing after moves, setting up to cover areas ahead of your opposing CEO’s movement.

Jump Out is as it sounds, a chance to get a battlegroup off the battlefield safely. Due to the budgeting element to the game this is not as odd a choice as it may sound.

With that all done it’s the Active Attacks phase and this is where the active battlegroup gets its chance to fire, but before that the book details the final Scan Step, which may be needed to fulfil a contract or cover a special rule.

Combat is described on page 24 and starts with a Weapon Systems Table – from Light Blasters to Planet Smashers, the game’s got you covered! Each weapon has a range with both a minimum and maximum amount that targets must be within. A number of attack dice (from 1D6 all the way up to 4D12) are used to determine number of hits. The damage value lists the amount of damage that each unsaved hit will place on the target.

If the target has a shields value it makes save throws; must roll equal to or under its shield value. Unsaved hits add up their damage values and these are applied to the target. And that’s it for the basic rules. And a hefty amount of flipthrough info already.

So, much as we want to go ‘all the way’ with this, we’re gonna leave it there, for you to digest, and we’ll come back with part two next week, getting into the game’s other elements – a load of additional rules, details on space – where your battles will be fought – and the objects in it, the Contracts (missions), Revenue, and more.