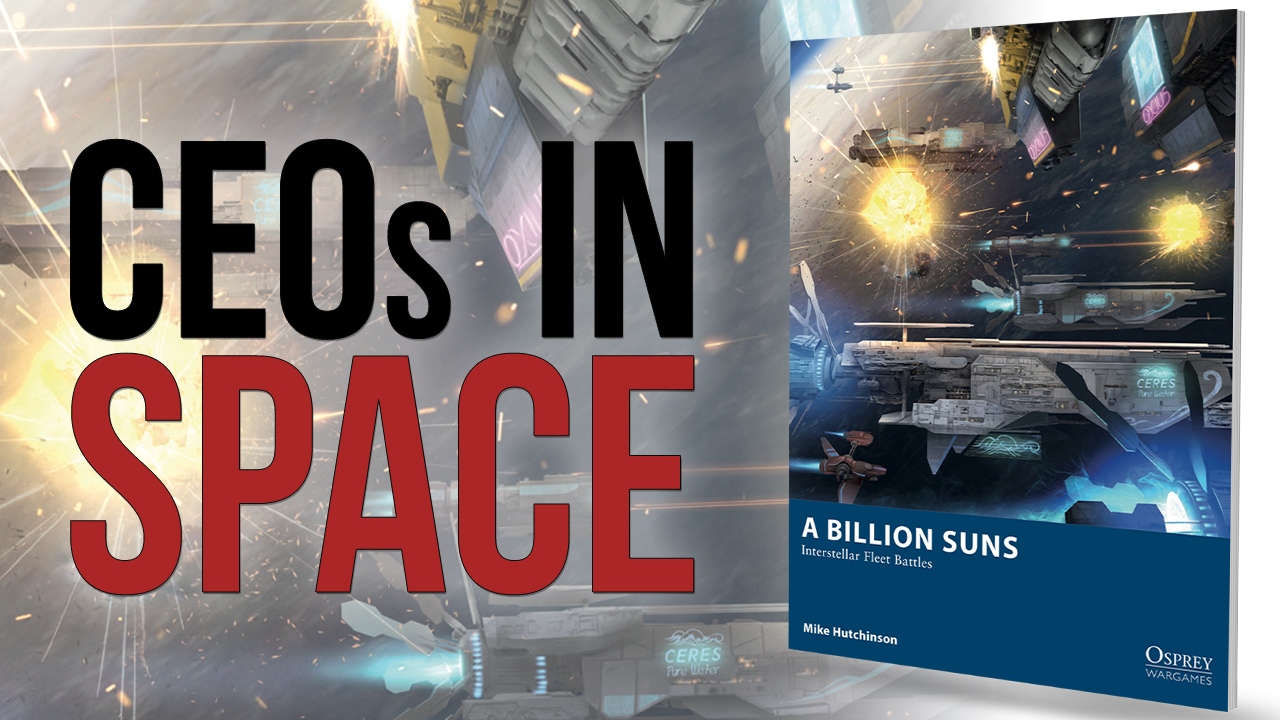 We looked at the background and core gameplay elements of A Billion Suns in part one and, based on those things alone, we heartily recommended this new space combat game from Osprey. Now, in Part Two, we get to look at some of the more advanced rules in further detail.

To start things off we will pick up at page 28 of this 64-page softback book. That’s where the use of each players’ Helm is covered in detail, something we touched on in the first video. If you’ve not watched that one yet, you should go do so!

All caught up? Ok then! The Helm is the place where CEOs (that’s you, the players) put command tokens on different sections to use in the game’s phases. Initiative and Jumping In CMD tokens provide an edge in those areas but it’s with the Tactical CMD tokens that the in-game ship specific movement and combat adventures can be modified.

This is done through diverting power to specific areas. If you put power to Engines then move distance is doubled, power to Inertial Dampeners will allow a battlegroup to fire its primary weapons even if it performed a High-G Manoeuvre, power to Weapons Systems will add a minus to your to hit rolls (which is good, lows are what you want in the game). Here you can spend multiple CMD Tokens up to your battlegroup’s Mass value, so you can potentially make the to-hit roll an almost foregone conclusion. Power to Shields is the same mechanic but each token will boost the shields by one. Additionally, you can choose to just apply an Override, simply allowing you to re-roll any single dice.

What all of this means is that before the turn starts you can begin to formulate a plan as to where you might spend your CMD Tokens but, as things change in the heat of battle, it may be modified. Should one of your battlegroups come under unexpectedly fierce fire you might want to divert power to their Shields, to keep them alive, even though it will foil your plans for a double move and fierce volley of fire from your Cruiser.

Next come additional rules for the Jump Phase – these are where the game’s multiple battlefields and jump points make for fascinating tactical considerations as vessels hop between them.

Jump Shock happens when a ship with a higher Mass value jumps within range of others – the smaller ships suffer a number of 1 damage attacks equal to the larger ship’s Mass. Probably not of too much concern to another large vessel but if it’s a low-mass squadron then there’s the risk of it being destroyed by the disturbances in space. Jump Shock can affect friendly as well as enemy vessels too.

Jump Hopping allows battlegroups to move from one jump point to another; this could between points on the same battlefield or move onto another one, creating an ever-evolving web of jumps and combat in various places.

There are interesting additional rules in the tactical phase too. Go Rogue allows the controlling CEO to do damage to one of their battlegroups but count that damage as a CMD Token too. Ships that get destroyed create an explosion that causes damage in the same way as Jump Shock. The more your ships take damage the more chance there is that their weapons will malfunction (which causes further damage, equal to the strength of the weapon itself) but you can protect smaller ships by putting them beside a larger one – a rule called Mother’s Wing.

None of these things greatly add to the complexity of in-game requirements, record-keeping, or referencing, but they provide a ton of depth to games and bring in just the right amount of random disaster potential.

There’s a full example of the advanced attack rules on page 34 that brings all of the concepts together really nicely in a game situation.

Next it’s onto Utility Ships – non-combat vessels that aid you in various ways – with Carriers acting as jump points from which zero Mass battlegroups can scramble, or mining vessels can disembark. Those mining vessels can use their lasers on stationary objects, usually to fulfil a contract.

One thing yet to be covered is the vastness of space itself and that’s where page 35 on has you covered. As the Hitchikers Guide to the Galaxy says, space is big. Really big! But for the sake of fun games A Billion Suns makes its space a bit more packed than the average.

Any non-standard feature of space is called Dangerous Space, be it clouds of debris, the carcasses of destroyed spaceships, the gravity wells of dwarf stars, and so on. Any ships moving through or ending their turn in Dangerous Space risks taking damage at the end of its movement.

There are also specific objects covered with specific rules – Asteroids have a mass and silhouette, so they can be destroyed, the same with Facilities. There are other types of object too and these get a good bit of coverage from page 38. They largely feature in the game’s Contracts – the missions – so onward, to them.

A Core Systems Contract set – basic ones that are designed to fit the common activities and conflicts a CEO will face – are in the book, but there are more online for all-out war or far space exploration. Generous! The Contracts are managed through a deck of playing cards and each active Contract gets its own deck and special rules. The Infowar Contract, for example, requires players to use a Spades deck (which is placed face-up and runs in ascending order), add an additional table to play across. ComSats are put into play too, which can be hacked to generate revenue.

A Supply Contract, on the other hand, needs a Hearts deck (which is placed face-up and runs in descending order), but no extra table. Instead, a planetoid is placed and this adds a new goal in the game, with utility ships needing to access it and provide supplies to gain revenue.

With 12 possible Contracts combined in different ways your games will always be fresh and the rules for them run from page 44 to 52.

The last part of the book gets into rules for connected games – designing your Corporation and Campaigns. There are no specific factions defined but the book provides Competitive Advantages to help players make their own Corporation and unlock the right kind of feel.

These Competitive Advantages potentially improve across multiple games through tech-trees – incremental upgrades that are boosted through research (which is, in turn, boosted through the amount of Capital you accumulate in games).

There are six Competitive Advantages covered – Aggression, Discipline, Endurance, Helmsmanship, Logistics, and Military – and there’s a ton of flexibility here. Getting unlocks at different levels will potentially unlock Advantages in other areas too. This will define your battlegroups on the table as well as giving players who love lots of rich background the inspiration for more flavour elements.

Campaigns are built around Reputation, Scale, and Capital. Ship classes must be unlocked with Capital, as must the research for your Competitive Advantages. Gaining Reputation keeps a ‘scoreboard’ between CEOs as battles happen. Scale is the size of the conflicts you are fighting. And that’s it!

The book ends with Designers Notes from Mike Hutchinson, credits, and reference material.

A Billion Suns is a packed 64 pages of exciting new rules. It offers a genuinely exciting space fighting game with impressive depth in a compact and elegant ruleset. So, what are you waiting for? Get out there, or get online, order up some new space ship minis, and stake your claim in the vastness of the galaxy.