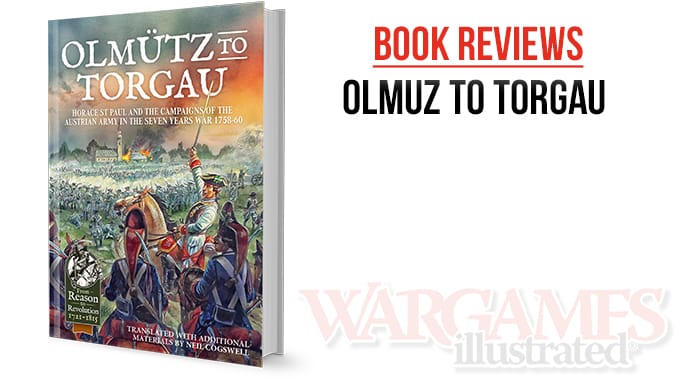 Olmütz to Torgau: Horace St Paul and the Campaigns of the Austrian Army in the Seven Years War 1758-60
Neil Cogswell
Helion
Reviewed by Phil Herbert

Olmutz to Torgau (Horace St Paul and the Campaigns of the Austrian Army in the Seven Years War 1758-60) is an interesting blend of first-hand accounts and well researched history that bind them together giving great context resulting in a really useful book for both historians and wargamers alike.

The book begins with a comprehensive description of each element of the Austrian Army of the period including the General Staff, Infantry and Cavalry and the Artillery that supported them.

This then leads into the mixture of diary and researched history and as the title suggests many of the first-hand accounts have been taken from the diaries of Horace St Paul, an English gentleman turned soldier of fortune who served with the Austrian Army throughout the Seven Years War following exile from his homeland for killing a man in a duel. These are supplemented from various other sources including the perspectives of those from both Prussia and Saxony, the other nations involved in this campaign.

The book is broken down into four distinctive sections, the first three of which cover in detail each year of the campaign including battles, sieges, and all army movements in between these. Certain events are covered more than once giving Horace St Paul’s accounts, official accounts and those of other nations including those of Frederick the Great. All of which help to paint a vivid and fascinating picture of this campaign, the soldiers who both fought in it and the officers who commanded them.

The fourth section of the book contains over two hundred pages of Ancillary Materials, again broken down into three parts corresponding with each of the first three sections of the book. Included in each of these sections are prints, maps of battles, plans of cities and fortifications and finally Orders of Battle for each army at each different stage of the campaign.

For those interested in wargaming this period, and especially those wanting to organise detailed campaign games this book is an invaluable source of information. The text offers the reader the information to really bring any game to life giving inspiration for both games and modelling projects alike with the Ancillary Material helping to provide accuracy for both terrain models and game set ups.

In summary I cannot recommend this book highly enough to anyone interested in the Seven Years War and especially to those of us who wargame its battles.