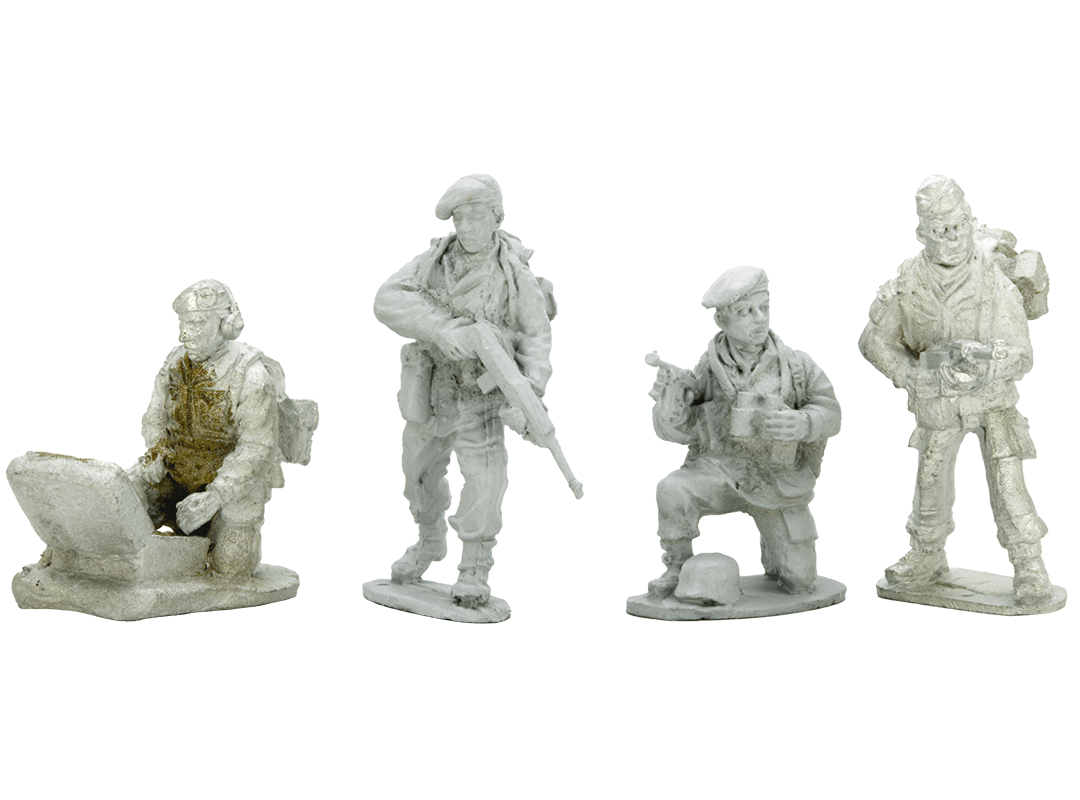 New from Offensive Miniatures, an addition to their Elite catalogue, it’s a “Jedburgh” Team.

This set of four figures joins the Offensive Miniatures British Paras range and represents the teams of specialists who parachuted into France during WW2. Over 90 ‘Jed’ teams joined the fighting in Normandy in the later stages of the war and Jedburgh Teams are an HQ choice in the recent Bolt Action Campaign book D-Day: US Sector. This is a timely release then!

Included in the set are three men in action as well as a radio operator. They come at 28mm scale and look realistic, with well-proportioned details and slender weaponry. They’ll fit in nicely with figures from other 28mm ranges and, should you want to match them up with Bolt Action figures, will find that they sit alongside them well. There are very slight discrepancies in the scale of some weaponry but only the most obsessive will even notice it on the gaming table!

The Jed teams typically consisted of three men – commander, executive officer, and non-commissioned radio operator – so here we get a bonus model to offer some extra variety.

The casting is pretty good but there’s a strange taint to the colour of the metal on some figures – a rather unsightly brown. It is particularly noticeable on the radio operator who is so ‘browned’ that he looks like his nerve has failed him on the battlefield! This, of course, will not be visible once figures are painted, but it makes for figures that look a bit lower in quality from the blister. There’s fine detail and a distinct lack of flash or mould lines on the casting, so it is a shame that the discolouration is present to give us slight cause for concern about the actual metal quality.

Looking specifically at the figures, they are a characterful bunch. They’re hefting a good bit of kit around, which is just right for their behind enemy lines infiltration. Weapons included offer up a good mixture – there’s the standard-issue M1 carbine as well as holsters for their Colt automatics, but there’s also a Thompson and a Sten gun resting next to the radio.

Though they’re in the British Paras range the Jeds were a mixture of military personnel from Britain, Canada, France, and the US and they were involved in operations in the Netherlands and South East Asia too – you have a good bit of potential to work these into your force. If you play Bolt Action and want to focus on France and the resistance then these will be a way to bring an elite aspect to your otherwise rather rag-tag group of Partisans.

If we ignore the ‘soiling’ present on his uniform the radio operator is actually a very cool figure. He’s squatting down and using the Type B Mark II radio (also known as the Jed Set) which has been recreated with a good bit of detail. These sets, a means of communication with Special Force HQ in London, were absolutely essential in the Jeds’ war efforts; you’ll probably want to use this figure when using the Bolt Action ‘Supply Co-ordination’ special rule in order to boost the firepower of your Maquisards.