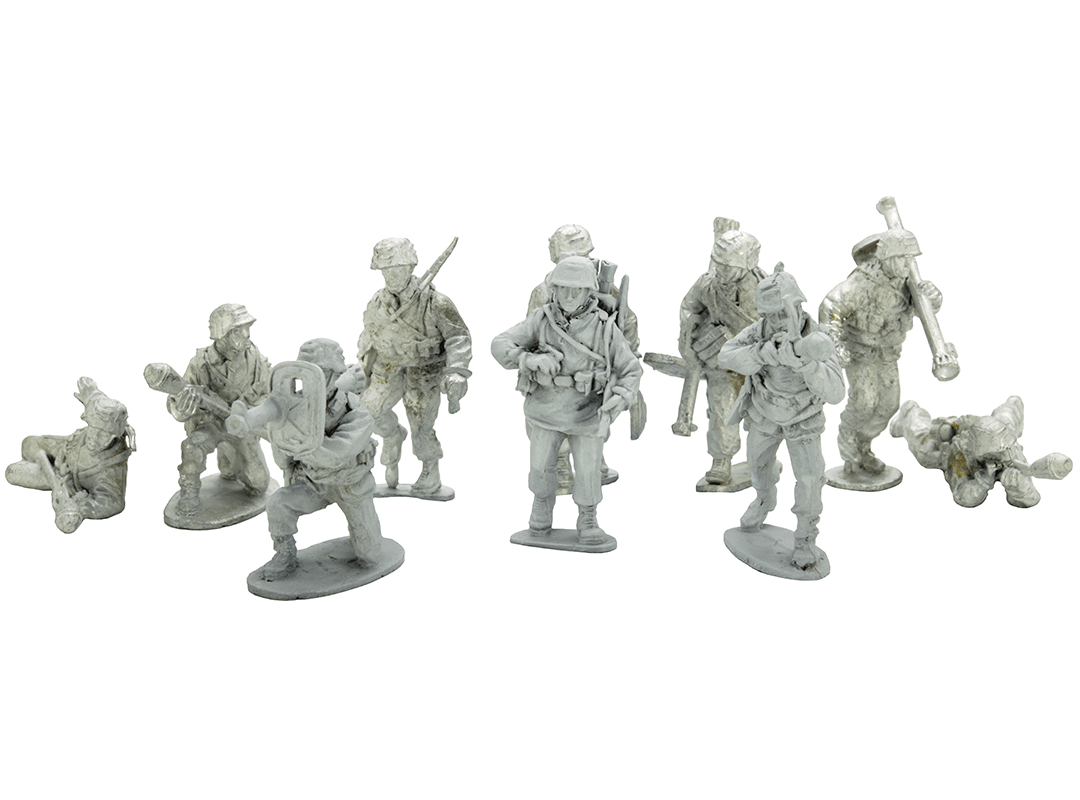 Offensive Miniatures add to their Elite: Waffen SS range with this set of ten 28mm miniatures, armed with more anti-tank firepower than you can shake a Sherman at.

It seems gamers have an insatiable appetite for the elites of the Third Reich – we get almost as many new lots of SS minis in to review as we do Napoleonic rulesets! Thankfully these new, 28mm, metal cast miniatures from Offensive Miniatures look about as elite as a WW2 set can.

You get ten figures at what we’re going to describe as ‘real 28mm’ with proportions that are slender and refined when compared to the slightly more heroic look you might get on something like a Bolt Action figure. The 28mm scale is the average but it’s possible to discern a difference in size between a few figures in the set. This is not unrealistic, of course, as people come in all different heights and builds, but we felt worth mentioning.

The figures are cast to a decent standard, carrying the details present in these well researched, gear heavy, great looking sculpts. We voiced some concerns about the ‘brownness’ of the metal in the last set of Offensive Miniatures we reviewed – there is a hint of it here too, but not as much.

First, we’ll take a look at the five men with Panzerfaust; these come in every pose you could want. There’s advancing, firing from standing, kneeling, firing prone, and spotting while prone. This is great stuff to add character to any army and will be especially welcomed by skirmish gamers who might want that heroic pose variety or to put more time into the painting of each figure’s details. Quite what those skirmish gamers would want with ten anti-tank elites in a balanced game though …

Well, regardless of that, these are outstanding figures with loads of gear along with their well-designed Panzerfausts. The launch tubes on these have their foldable sights up or down, depending on the action of the owner, which is a great detail. The men all have a lot of equipment and entrenching tools as well as K98ks slung over the shoulders of some models. While we like these a lot and the guns have refined detail, it is these elements that proved to be weak points on some of these single part casts. Barrels and handles project from the figures which makes for a more realistic look but also a potential breaking point; in the set, we got these bits were mostly bent out of shape and we lost barrels and tool ends through just minor handling. We suggest a couple of coats of superglue over the top before priming and painting – that might fill any micro-gaps and add strength.

Three Panzerschreck are included too and these boosted bazookas have great detail again. So do the models carrying them with two advancing and one kneeling and ready to fire. These are the sort of figures that will make the keen painter want to lavish detail on them. As well as loads of gear one of these models has a slung MP 40 (as does one of the men with a Panzerfaust) to mix things up.

The final two models are a man carrying spare rockets and one lugging two Tellermines around. Again, great detail here on figures that’ll feed the seemingly insatiable appetite for these German elites.