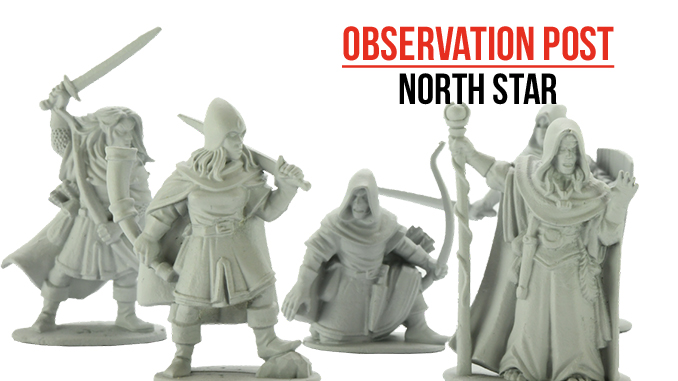 For those of you who have been living under a mossy stone for the past few months (or self isolating in your own home for some unknown reason) “Oathmark” is the new fantasy mass battle game from Osprey. With full sized units of troops, these rules have everyone dusting off the Warhammer Fantasy Armies that they thought they would never use again! North Star are supporting the rules with a range of boxed sets of plastic miniatures for the main races (Elves, Dwarves, Men and Goblins) as well as metal miniatures for the characters and support elements of these armies.

Which brings me to the current batch of Elven characters that I have been sent for review. These are all metal miniatures and include a musician, with hunting horn and sword, four warriors and a mage. The warriors are armed with swords and two also have bows, making them ideal for cross-over use as characters in your RPG game or in skirmish games such as “Rangers of Shadowdeep.” The detail is excellent with lots of creases and folds in the tunics and cloaks that will reward the use of washes or which would even come up well using GW contrast paints. Two of the characters carry the teardrop shaped shields which are also present in the plastic boxed set, allowing these to be mixed with your plastic troops but also allowing you to make use of the shield transfers North Star are producing to complement this range. My personal favourites are the warrior standing with shield and sword, his face covered and the hood on his cape up, and the elven mage, again hooded but posed in the middle of casting a spell. They both exude cool and if they don’t end up in an “Oathmark” army, I will ensure they are included on my next dungeon crawl. If you have an elf army, the miniatures in this pack are well worth including to lead your forces to victory.