Oathmark: Battle Of The Lost Age 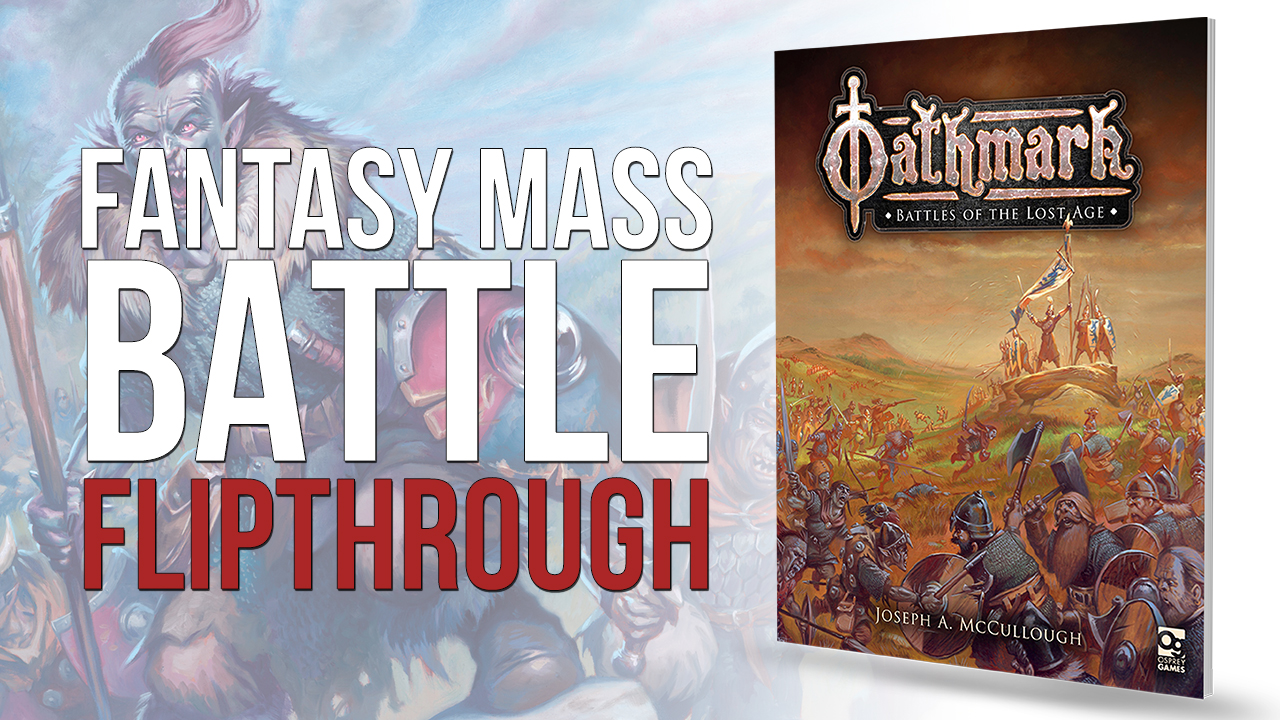 This 192 page hardback book is the eagerly anticipated “fantasy mass-battle” game from Osprey. Penned by Frostgrave author Joseph A. McCullough and having been playtested over the course of the last two years, Oathmark is already supported by an extensive range of figures by North Star Military Figures and has been hyped for a while now by all those concerned with its production.

But what’s actually inside the cover of this impressive looking tome?

We begin with a brief introduction to ‘the Marches’ – the lost land in which Oathmark is set. Followed by the basics of what you need to play. Pertinent information here includes a recommendation that, for example, a unit of ten human archers is mounted on a 125mm wide by 50mm deep movement tray – that’s two rows of five figures. From this you should be able to glean the going rate for an Oathmark unit.

Measuring is in feet and inches you will be either relieved or resigned to hear, and a ‘Kingdom Sheet’ and ‘Army Sheet’ are required for book keeping – templates for which are provided at the back of the book.

From here we swiftly move on to ‘Playing the Game’. I say swiftly to underline the fact that there is surprisingly little more information on the Oathmark mythos – no protracted narrative about the forming of the kingdom or stories about champions of old – which for me is a blessed relief, but if you like that sort of thing you’ll be left wanting.

So back to playing the game. Every figure has a stat line featuring, first up: Activation, Move, Fight, Shoot, Defence, Combat Dice and Health. These are all stock statistics for a mass battle game, with Combat Dice being the one that gives the biggest clue to how the game will play. As it says, Combat Dice are – “The number of dice you roll for this figure in a melee combat or when making a shooting attack”.

Points, special abilities, base size and equipment, including weapons, are also listed on the stat line.

We then move on to instructions for organising your units, including the leader figure A.K.A. Officer.

Beyond rules for The Turn and Initiative etc. it’s worth pausing  to view “Activation” which works on a unit-by-unit basis and in an I-go-you-go pattern. Each unit needs to pass an activation test to be fully activated, if it fails it can only carry out a ‘simple activation’.

Once activated each unit can take two actions and pages 25 – 33 take us through the various actions that can be taken including ‘move’ and ‘manoeuvre’.

We’re then into Combat. This is where the Combat Dice come in. The unit engaged rolls one D10 dice multiplied by the number of figures in the front rank, to a maximum of 5. So, no buckets of dice here – just the five max.

Players now calculate the Target Number they need to hit their opponent, before adding or subtracting modifiers. Hits are applied to the opponent’s figure’s health, and casualties i.e. models, are removed from the table.  So note folks, this is a game of figure removal, the rules allowing for a maximum of three figures being taken away in any given combat.

Pushback occurs following combat, as outlined on page 41, and there then follows an example of how a round of combat could play out.

Following combat we continue a well-trodden path into shooting, which works in a similar fashion, and in the rulebook is again followed by an example of play.

Morale is covered over two pages, in which we learn that units which fail their morale test are Disordered and a token is placed next to them. ‘Cascading Panic’ is a nice phrase for the way in which the whole army can break and all can be lost.

The end of this section concludes with a double-page spread of artwork. Here some goblins change forward into combat. The whole book is punctuated by similar nice pieces of art which help break up the sections and create visuals for the early medieval feel of the Oathmark setting.

So that’s the basic rules done, and from page 56 we are into the ‘Advanced Rules’, which begin with a look at Characters i.e. generals, spellcasters and heroes.

Some characters have the ‘Command’ Special Ability which allows them to manipulate their own troops – aiding with activation.

Beyond Characters we have other advanced rules like ‘Splitting and Joining Units’, Monsters, Artillery – note no gunpowder weapons here – and magic items.

One of the more interesting Optional Rules comes next in the form of ‘Strange and Catastrophic Events’, which adds a characterful element to the activation phase, by introducing the prospect of such things as soldiers walking on a hornets nest, or an officer being sniped! All of these events are rolled for randomly on two tables.

Following the Advanced Rules comes ‘Building an Army’. Two methods are suggested, the first being a basic tallying of points values between the forces of you and your opponent, and the second being a unique – as far as I know! – system of creating a kingdom, from which you draw your armies as well as deciding on the terrain which makes up your realm. All this works in tandem with campaign creation, something designer Joe Mac is always keen to develop in his game

The various major races of the Lost Age: Humans, Dwarves, Elves and Goblins and Orcs are all provided with a ‘Terrain List’ to aid with this process of kingdom and army list creation, before we move on to some specifics regarding the number of points that should be used in a game.

Then come the Army Lists. Beginning with the ‘Dwarf List’ we proceed through all of the races mentioned above, with stats provided for the different troop types based on their associated terrain and including larger creatures or monsters that are regularly seen in the same armies as the main races. Like the Indrik – woolly rhinoceroses that fight with the Dwarves or Ogres that fight with the humans.

As well as the different fighting troop types the Spellcasters appear in the army list too and we see that all races – even the Dwarves! – are allowed magic uses.

The Army lists conclude with some ‘Unaligned Creatures’ like the Gargoyle and Dragon who fight for any cause.

It’s worth mentioning at this point that Oathmark breakes with tradition by allowing an unconventional mix of races and creatures in an army – there is nothing to stop some traditional goodies fighting alongside baddies. So Elves and Goblins can be on the same side in Oathmark! See our video interview with Joe McCullough for his justification of this abomination!

Our next section is ‘The Campaign’ in with the author provides rules for expanding on those begun in ‘Creating a Kingdom’, and shows how to add ‘Battle Types’ e.g. ‘Border Strike’ and ‘Invasion’ into your games, as well as scenarios like ‘Bridge the River’ and ‘Chance Engagement’.

The book reaches its conclusion with three Appendices, A – being ‘Special Abilities’ like ‘Brace’ which enables a unit to form a shieldwall to counteract a charge. Or ‘Stone Gaze’ which allows a unit to glare at its opposite number and inflict hits.

Appendix B is a list of spells divided into ‘general’ and specific racial types.  These include most of the standard Fantasy Battle tropes like ‘Lightning Bolt’ and ‘Heal’ and amount to about eight spells per race, plus another ten ‘General’ spells.

Appendix C is a list of ‘Magic Items’ which can be purchased using points assigned to your army or kingdom.

Right at the back of the book we have the copiable reference sheets.

Oathmark is a simple mass-battle fantasy game which will appeal to those wargamers amongst us who are already fondly familiar with high-fantasy elements like Goblins, Elves, Lightning Bolts and Dragons. It doesn’t profess to break any new ground but rather provide for an enjoyable evening of pushing sizable units of fantasy figures around the table whilst providing an interesting campaign setting in which to play joined-up games.

Accessibility is a big selling point of these rules and the fact they are accompanied by an excellent range of miniatures should really help Oathmark secure a regular place on the tabletop.