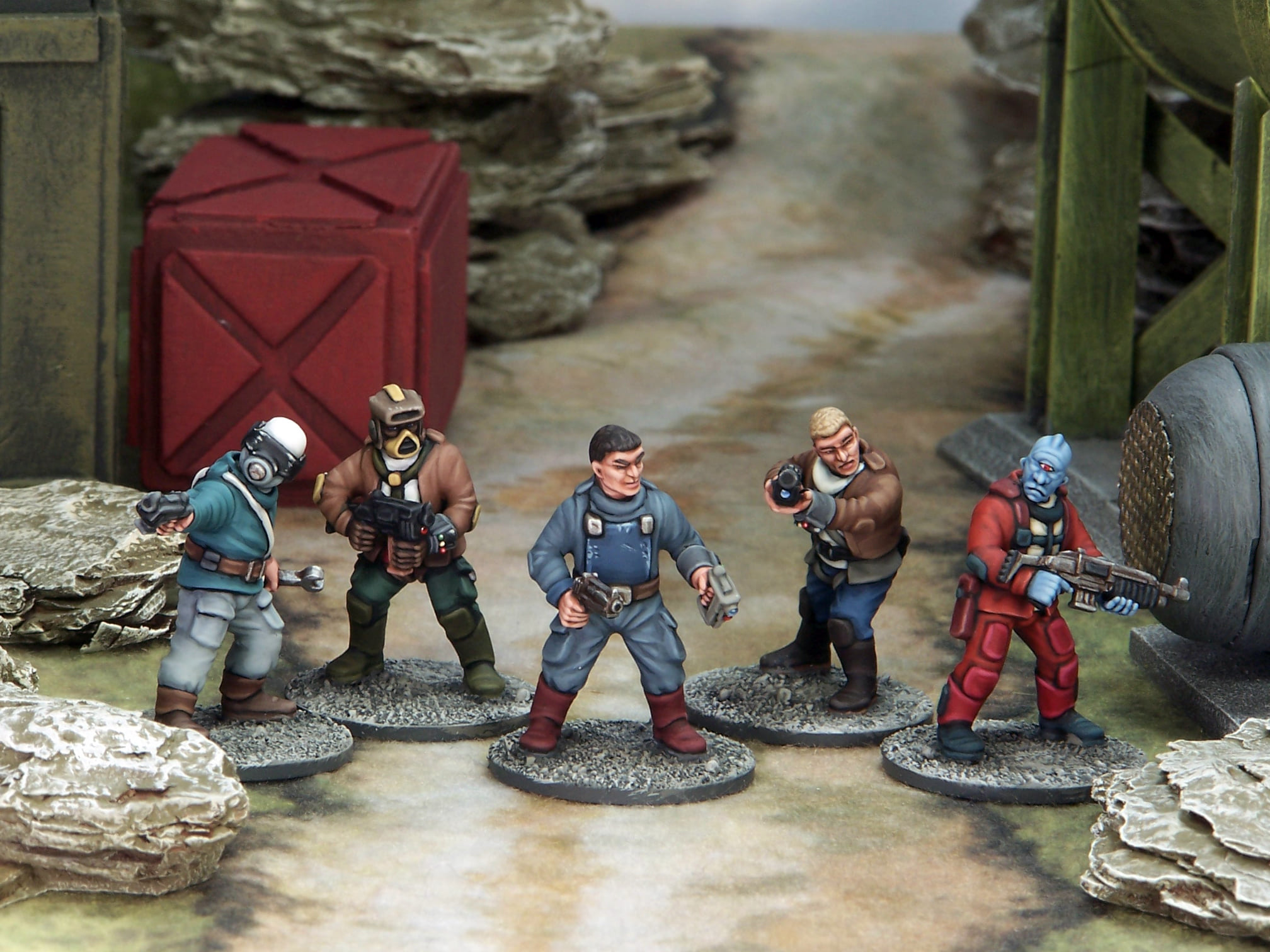 One of the most appealing things about Stargrave is the various options that allow you to create a cool crew. If you want that crew themed to existing intellectual property you can make the game work nicely with Star Wars, Battlestar Galactica, Starship Troopers, Firefly, Fireball XL-5 [You weirdo! – Ed], or whatever else you might desire. If, however, you want to build your own world you will need figures to populate it; that’s where this Stargrave Crew set from North Star comes in.

There’s enough versatility in this box to build many of the crew options in the Stargrave book and the figures look appealingly old school and slightly camp. There are influences from existing sci-fi worlds in their design; we can see Star Wars in parts, particularly some of the alien heads, while Star Trek is there in the more utilitarian accessories, but the melange of these and more makes for a quite unique Stargrave style in the end.

Each frame has enough parts to build five crew, so the two frames included will take you to your crew maximum of ten. You’ll probably want to add extras to differentiate some of the crew’s specialists as well as the Captain and First Mate (who probably warrant even more bits) but you can construct a very workable full crew with this box set.

Things start with the five bodies on the frame which incorporate legs and torsos and come with different levels of armour. There’s strapping and equipment included here, making for a detailed start to each model, onto which more detail is added with the many arms. As with other North Star sets, you’ll be filling your bits box with spares too.

As well as pistols and carbines of differing styles there are items of specialist equipment. These are somewhat non-descript – a data chit, for example, could represent a hacker’s device (and where we’ve used it on our build that’s the intent) but it could equally be used as some kind of vital signs scanner for a Medic. The same goes for the small trigger device we’ve given to our pilot crewman. It could be a snub pistol but we’re envisioning some sort of interface device; it could fix robots, hack systems, and much more. This is a smart design and means there’s loads of potential here for varied figures. Any arm sets are marked with numbers to ensure you put the right bits together.

There are lots of extra accessory parts to add to your crew and these are equally versatile: pouches, holsters, packs, and canisters. Again, these let you theme models to a specialism or background. We gave our fish-faced crew member a canister on his back to represent a water rebreather, allowing him to survive in fresh air environments, but putting it on the hip of a different model could represent a propellant supply.

It’s the 20 different heads, human and alien, that bring the finishing touch to each figure. That’s a generous offering, and the styles vary from smarmy looking Duke Nukem type heads to truly weird alien visages. With helmets and bionics mixed in, there’s loads of sci-fi flavour.

We haven’t yet got our hands on the other North Star box sets for Stargrave but we’re looking forward to seeing how well the parts from them mix with these ones to bring even more options. If you’re getting ready to play some Stargrave this crew box looks like an essential purchase.