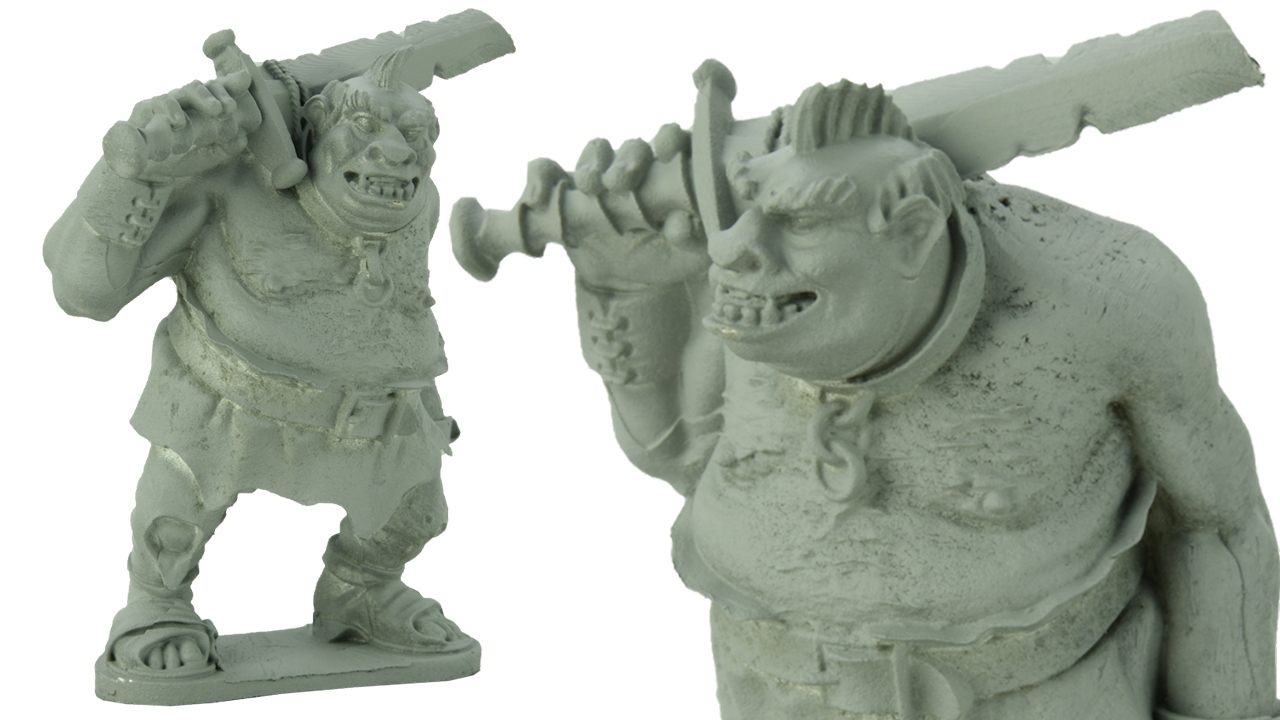 The extremely popular fantasy games Frostgrave and (certainly growing in popularity) Oathmark get quite a lot of coverage here on Wi Prime. That’s partly because of their popularity but it’s also because they get a lot of miniatures released for them, manufactured by the folks at North Star. It’s less often that we get a model to review that’s made for the writer of those games – Joe McCullough’s  – Rangers of Shadow Deep. Today, however, we have!

Perhaps trying to make up for the lack of previous quantity, this is a very hefty one-piece metal model that is big enough, should you need a quick home defence option in these apocalyptic times, to make a good cosh if you put it in a sock. *

Beyond being big (40mm from bottom of foot to eye-line and a thick 20mm wide) this is a characterful sculpt to represent one of Rangers of Shadow Deep’s ogres. But, ogres being ogres, it would be useful all over the place, depending on your fantasy game and world of choice.

This brute bears many trademarks of the fantasy classic. He doesn’t look terribly intelligent, with a somewhat goofy expression on his Neanderthal face, but he’s sporting the latest in mohawk hair styles to bring some snazziness. On the subject of hair, he has some body hair texture sculpted into his bare, pudgy, sagging chest.

His legs are clad in raggedy fabric and his feet are strapped up in basic sandals. The collar around his neck gives the impression that this ogre has been, or still is, a captive/slave of someone. It seems it is a requirement that all large models have a barrel on their belt and this ogre’s not bucking the trend!

To finish things off (especially enemies) there’s a hefty sword – not a refined weapon but as it’s the size of a normal human miniature we don’t really think that’ll be a problem for the ogre when swinging it about!

This is a good looking model – old school but in a good way – and other than some mould lines that need dealing with (particularly visible on his lowered arm in our cast) the quality is high.

* Wargames Illustrated neither condones nor encourages violent acts committed with miniatures, no matter how suitable the model in question might be for the task, nor how deserving the target of said attack may be … even if they are someone who rulesmongers constantly!