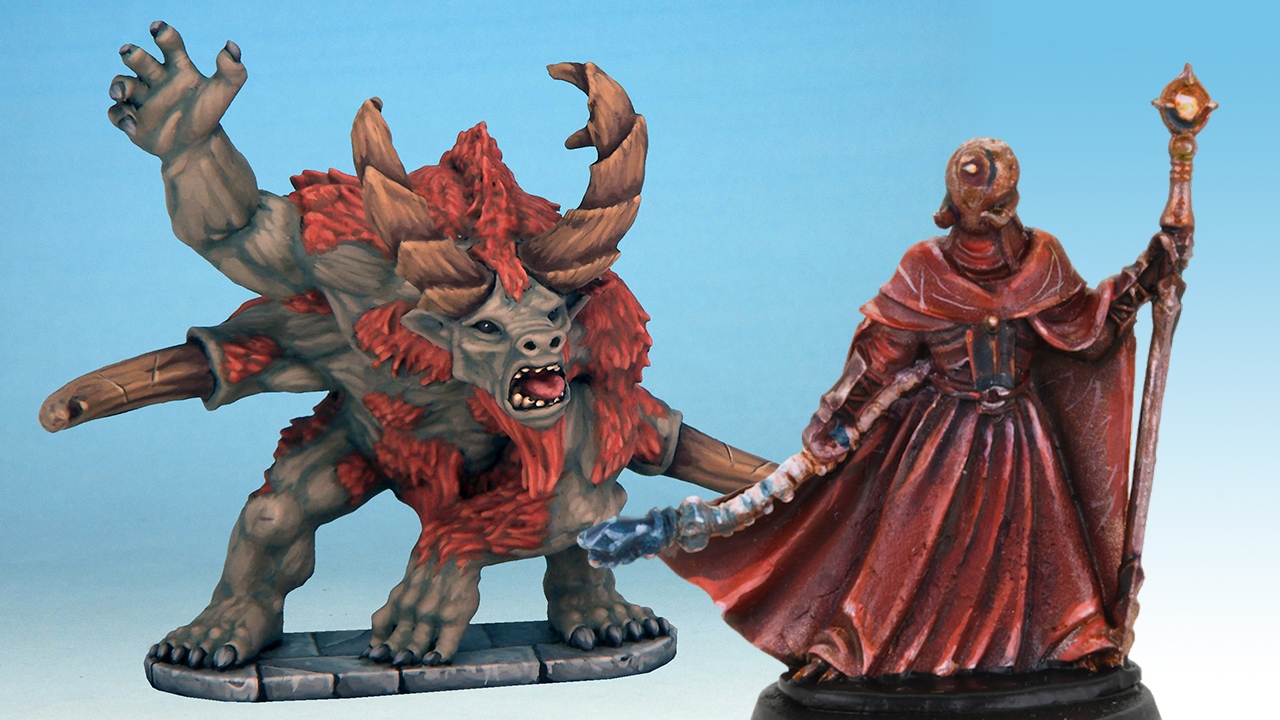 We’ve got an assortment of new metal miniatures from North Star, made for their ever expansive (and just voted best Figure Range in the Wargames Illustrated Awards 2020) Frostgrave range. These ones are to accompany the Red King, the game’s first supplement since its second edition. Let’s dig in.

The Herald of the Red King

The art for this character is fantastic and we’re extremely pleased that the miniature is similarly impressive. The illustration from the Red King book is the design lead for the model and, as far as scale goes, it is in keeping with the Frostgrave world, with the Herald (and the rest of the stuff we will be talking about) a tall model – fitting for a powerful demonic character.

In the game world the Herald is a rather mysterious entity – it is never fully revealed if it is an individual demon or a fragment of the Red King himself. Either way, he certainly has the look of what those in gaming circles call “a bit of a badass”. The ‘end of game boss’ to some extent.

A one-piece metal model, the Herald is cast to a good standard (as you would expect from North Star) and there was minimal clean up; the only slight issue we could pick at is some minor pockmarking on a few robe recesses. Those long, flowing, ever-moving robes are finely sculpted, as is the bronze helm, hiding any trace of the Herald’s true features. These are the sorts of things that take a paint job really well and generally, quite quickly, which is always a bonus. With the great definition of the different areas of the robes here this one is going to make painters happy.

The Herald’s like some sort of demonic faceless cardinal with a staff in each hand – we imagine he doesn’t have to do too much actual hand-to-hand with them, what with his magical abilities, but it must be quite a sight when he dual-wields those! The upright staff is metal and shines with a bright jewel at its tip, the other is gnarled and covered with bone fetishes. The bone staff is the only slight quibble we have with the sculpt – it’s not quite gnarled enough, so it looks a little like it’s accidentally bent, rather than some curved oddness. We found that with a little pressure we could accentuate the curvature a little more, to make it better fit the art.

Painting the models we review in Prime is not something we often get the chance to do, the turnaround time from them arriving in the office to going online as articles is short, but Project Manager James has been excited about this model since the Red King book arrived in the office. He snagged it, and had it back for photos the next day. Over to James:

“I’m a sucker for robes on a model – they’re something that feels like a medative experience to paint, and the Herald’s are good ones. I started with a basic mid-range red, then added depth with darker red and hints of purple to enhance the richness. For the highlights I built up quick and progressively lighter mixes of red and orange, through to an off-white finish.

This leaves things looking incredibly stark – but then the fun comes in. I start to glaze over the model with thinned Games Workshop Contrast Blood Angels Red, and in the recesses, Contrast Shyish Purple. This brings everything together nicely, before I go back in and add some extra, more subtle highlights.

By taking this approach I had the robes painted quickly and could finish up by picking out the minimal extra details. The whole model was finished in an hour and a bit, ready for gaming!”

Two of the Nullmen come in a pack; once more they’re single part metal models and taller than a standard Frostgrave human by about a head-height. These are weird ones, in both their background and their three-dimensional miniature form! They have the look of an androgenised, featureless, alien-like creature. They are weaponless and baring it all (not that they have any ‘all’ to show), despite the cold of the Frozen City.

They’re probably going to be a Marmite sort of model – some will love them, some will hate them. The look is just odd, which is right to fit the background, but they’re in the uncanny valley a little bit (we suspect this is intentional) which makes them slightly unsettling to look at. They’ll be quick to paint though, with very defined musculature and features.

Two Stingers come in this pack and represent the Hrut, a new demonic race for the Red King. We looked at the plastic set of these in a previous Prime – these ones are metal models, coming in two parts (the crossbows are separate) and though in fitting with those plastic demons they look far more imposing, due to their unfurled wings and dynamic poses, perched atop conveniently placed rock outcrops.

We really like the poses on these – the Hrut who looks like he’s leaping back (in the spin) as he loses a shot is particularly impressive. Extremely dynamic and he sells the illusion that he is a demon about to take wing.

Nice details are present too – detailed mail with armoured pieces hung over it, sharp edged shoulder pads, and a defined gorget. The wings may be a bit undersized for practical flight, but we’ll excuse that as it’s rather the tradition in fantasy miniatures!

Finishing things up is the four-armed Foulhorn – a mighty beastie that, despite looking like some demonic manifestation of destruction, is a naturally occurring creature in the mountains to the north of Frostgrave. The bulk of this metal model is the body piece – all four arms present in a squat pose, weight being lifted from a forward placed balancing hand. The huge horned minotaur-like head and two heavy, sword-like appendages for the lower arms’ tips are the other parts of the kit.

Once built the Foulhorn looks like a real brute and he’s got the stats to match in the game. You would not want to find yourself one-on-one with this solitary hunter!