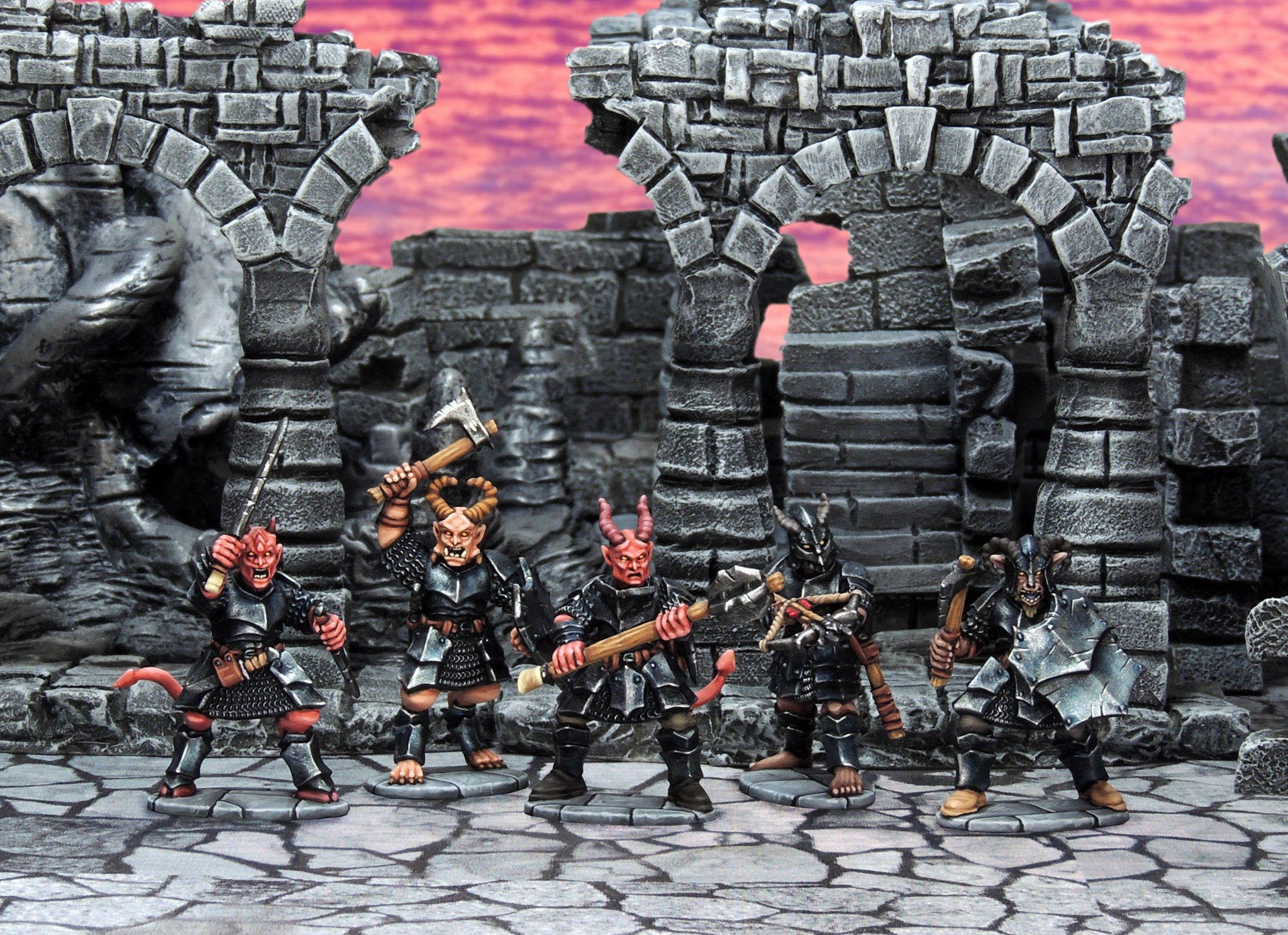 Tied to The Red King, the first supplement for Frostgrave: Second Edition, we’ve got a boxed set of 20 multi-part, hard plastic, 28mm scale Demons. They’re known as the Hrut in the supplement itself but, as with many of the Frostgrave plastics, there’s much potential to use these models elsewhere too.

Each of the four identical frames in the box is weighed down with a plethora of parts. There are five bodies that form the majority of the models, comprising of a base, legs, and torso, all as one part. The poses vary, with two sets of legs directed more naturally to a left-facing pose, two to the right, and one more front on. It’s not just the angle that varies, so do the types of legs. All of the models are armoured similarly, with plates over mail in a style that brings to mind the orcs and goblins in the Lord of the Rings films. Their legs, however, vary – some are more humanoid and others more bestial – with a range of shoes, bare feet, and hooves present.

Combine these options with the 14 different heads and you can make a diverse array of twisted demons. These heads also have a huge variety – corrupted human-like features, more demonic, or horned and bestial – and they come bare and wearing helms. There are even optional visors you can add.

So, that’s a wide range of possible looks and we’ve not even gotten to the weapons! Clearly the demon weapon-smiths have been worked around the clock, there are far too many options for the five models that come on each frame. You can build demons with crossbows, hand weapons, shields, two-handed weapons, and add plenty of extra weapons or ammo as accessories.

We particularly like the style of the shields – their segmented front plates have been bolted to the wooden body and they look like they have potential to do as much damage as the weapons here. When fixed to the empty hand arms the shields seem to pose at angles that look dynamic and aggressive too, which we really like.

The way the weapons that require two hands fix together varies. One crossbow has a hand fixed to support it, and a left arm that needs to be glued to it specifically. The other is clear of a second hand, allowing you to use a reloading arm or put a different off-hand on the model.

The two-handed axe, mace, and sword fit together differently to the previous Frostgrave kit that we built (Frostgrave Knights). There the second hand was fixed to the handle of the weapon but here the weapon shaft is left bare, allowing open hands to be fixed around it. This is a welcome change and makes for more varied poses. It also makes the kit work better for conversions.

We almost forgot to mention the tails that you can add to the rear of the models. These have an ‘armoured’ point at the top, so you can affix them to the back of the mail and make their join somewhat disguised.

We always enjoy putting Frostgrave’s plastics together, the range of parts and options get our model-making juices flowing; these are no different in the variety on offer. The only minor negative we found was that some of the parts don’t sit as nicely as they perhaps could – it was a tad awkward getting some of the two handed options to fit as snugly as we’d have liked. But that’s all, otherwise we are ready to welcome these terrible demons, with open arms and much chanting and worship, into the wild world of Frostgrave.