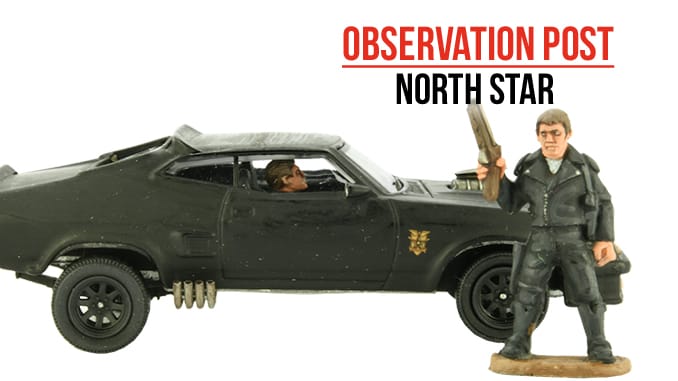 The staff at North Star Military Figures have rapidly become some of the most active ‘Friends of Gaslands’ in the UK. As well as providing copies of the new Gaslands Refuelled rulebook from Osprey Games, the company has added a number of products to those available, including templates, vehicle modification parts and even 1/64th scale diecast vehicles. But their latest venture helps to add a whole new dimension to the game.

Shown below is the first in a proposed small line of figures scaled to fit with 1/64th diecast vehicles. Sculpted by the incomparable Mark Copplestone, this is The Interceptor, a former police officer who has taken to the road on a revenge-fuelled odyssey. There are two figures in the pack, one with The Interceptor standing in leather jacket and trousers, holding a sawn-off shotgun in his right hand. The other is the same figure but seated, designed to be placed behind the wheel of a diecast vehicle (you can just about see him in the car!)

It’s also worth mentioning the recently released ‘Implements of Carnage’ plastic moulded frame (seen on the vehicles below). This contains a number of parts designed to be added to diecast vehicles, including various types of weaponry, rams, armour plates and other modification options to be found in the Gaslands vehicle design rules. There are also plastic motorcyclists on the frame, allowing these to form part of your Teams.

The plan is to add a number of similar figures to this small range, which adds another facet to the creation of your diecast vehicle teams and, perhaps coupled with the upcoming ‘unofficial’ rules in a future issue of WI, a whole new way to play using the Gaslands Refuelled rules.