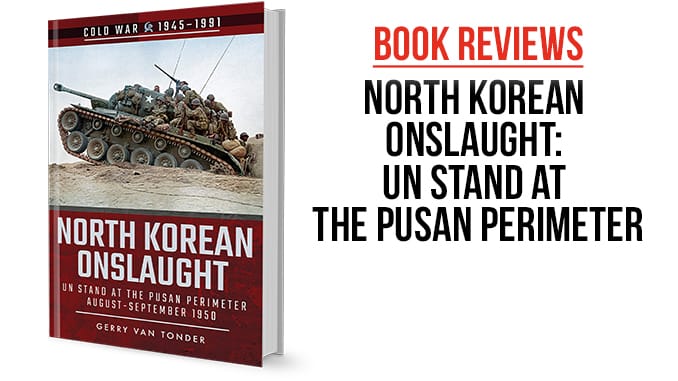 North Korean Onslaught is the latest book in the Pen & Sword “Cold War 1945 – 1991” series, and is the second in their “Korean War” sub-series.  Gerry van Tonder is a prolific writer in the former and the only writer in the latter.  He has had a prodigious output over recent years writing on topics as diverse as the Berlin Airlift, the SS and Malaya. This book has 126 pages including index, numerous black and white photos and a series of maps and illustrations.  There is also a glossary of military terms and a comprehensive timeline of the action.  Throughout the book the modern transliteration of Korean names is used for most places while the best known keep their older names, so Teagu rather than Deagu but Kimch’ŏn for Kimchon.  This doesn’t matter much given the confined nature of the action but I’m curious how the later books will deal with this.

The first chapter reprises the initial book in the series which covers the start of the war so this book does stand alone, though given the quality of it I suspect most readers will buy them all.  Having set the scene van Tonder then covers the action over the two month period covered by the book which was a vital period where the UN forces (at this point almost entirely RoK and US) fought to maintain a foothold on the peninsula.

The text is augmented by numerous inserts of quotes from US commanders and unit orders, as well as contemporary newspaper articles from the Sunday Post and Aberdeen P&J oddly enough.  The text is detailed and sets out what happened, where and in what order, which is really all you need.  The maps compliment the narrative and are clear and comprehensive.

There are two slight issues with the photos in the book, firstly the publisher has just issued two books on the Korean War and some of the photos appear in both, which seems unnecessary; and secondly the odd caption is a bit vague but there are so many photos that overall they are very good.  Many are new to me and it is good to see the segregated 24th Infantry Regiment represented more than usual.

As with almost all books on the conflict it is very UN centric but given the scarcity of information from North Korea and China this is understandable.  The bibliography is surprisingly short and while it contains many contemporary military and CIA reports there is nothing from any of the Korean writers.