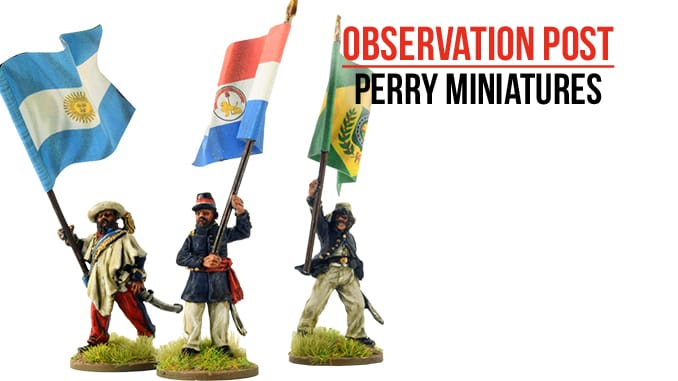 Alan Perry has embarked upon a brand-new range of miniatures for the 1864 to 1870 War of the Triple Alliance, also known as The Great Paraguayan War. This war took place between the nation of Paraguay and the three-pronged Alliance of Argentina, Brazil and Uruguay.

We spoke to Alan about the first batch of figures in the new range and photographed some which had just arrived back from the painter.

The Paraguayans are mostly featured with no shoes (something they did out of necessity or sometimes out of a choice) using smoothbore muskets. Some of the Paraguayans wear traditional chiripa kilts. Most of this initial batch wear a (red) hunting shirt that many already owned prior to the war. They also wear shakos based upon European styles but of their own, unique (shorter) style.

The Argentinians (seen below) were mostly dressed in blue, with a very French look to them, but they also had fatigue uniforms which were sand or buff coloured. These were piped in different colours, like greens and reds. They also had a tropical uniform which was all white, piped green. An interesting aspect of the Argentine army is the wearing of Carlist-style headgear. This variety of uniform has been replicated in the sculpts.

The Brazilians were the more efficient army and were greater adherents to regulations. They were probably the best troops in the War, the most active and reliable. The Brazilian army’s uniform was based closely upon that of the Portuguese, but ultimately looked very ACW, apart from the new-ish fatigue cap which was a bonnet de police, in the French style. In terms of sculpts, these are much more regimented looking.

For the Uruguayans, some are finished, but the range still needs work. Here we have the Lipstadt regiment, with the Carlist look, French equipment, blue jackets and the beret, but there was actually only one battalion of those. These have the full backpacks on, ready to embark on campaign. The greater variety of uniform styles will be explored in later packs.

Right now, there are 16 packs ready for release, with plans for more. There’s a lot to add, plenty of subject matter to work on. There are also cavalry and artillery planned for all the armies. Alan has also been working on some schematics and images for the various uniforms which we are going to make available in Wargames Illustrated. You will also find an interview with Alan, about the range, in the January issue of the magazine.

Once again, the passion of a Perry Twin has led to the creation of a whole new range of figures for a war that is little known outside of South America. The sculpts we’ve shown here are soon to be released and will hopefully prove popular enough for more to be produced.