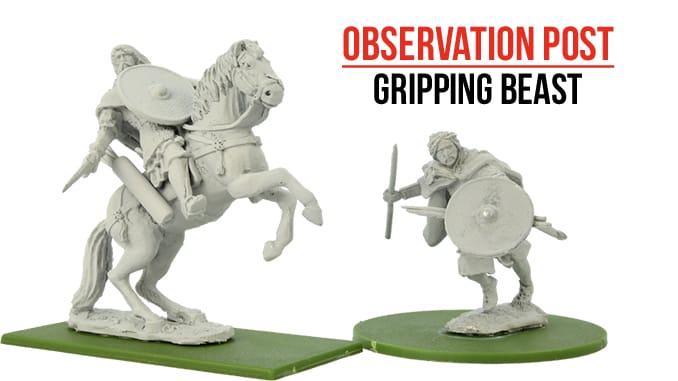 Owen I, King of Strathclyde, is the latest ‘Legendary Warlord’ realise by Gripping Beast, in their (under licence) SAGA range.

Both heroic in statue and pose, Owen will make a suitable leader for any Strathclyde Welsh warband, as featured in the Age of Vikings faction.

The two version of Owen – mounted and on foot – come in one pack and both figures are multi part, so some sticking is required, and I would suggest a bit of file or green stuff work if you want to get the smoothest possible fit. In our photos, the figures have been constructed with the minimum of fuss i.e. parts just superglued together.

In game terms, for an extra point, Owen replaces your normal Warlord and confers some advantages such as the ability to Close Ranks even though armed with Javelins and Mounted Units may use the Manoeuvre activation multiple times (without gaining Fatigue either!)

In history terms, he picked the losing side at Brunanburgh in 937 when he and his allies, the Scots and the Vikings of Dublin, were massacred by Athelstan’s English army.