New and forthcoming from Gripping Beast 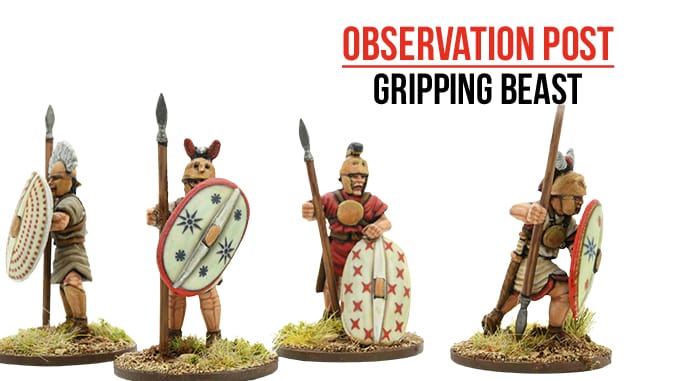 We’ve got an eclectic selection of new stuff to tell you about from Gripping Beast.

Pictured below you can see some of their re-worked and re-released ‘Italian Allies’ suitable for the Punic Wars. Nice looking figures which have benefited for GBs programme of going through their back catalogue of Ancient figures, reworking the masters and remaking the moulds. They have already worked their way through the Republican Romans, and the Carthaginians and allies are their current focus, with the Celts also on the hit list. We always find GB figures to be exceptionally well cast and this remastering process is improving the quality even further.

Also on the horizon from Gripping Beast is Milities Mundi, which had the working title of ‘Swordpoint Tiny’. It’s a stand-alone set of rules that use many of the mechanics from Swordpoint – their ‘Ancient and Medieval Wargames Rules’ – but for a smaller scale i.e. 6 – 15mm.

To accompany the new rules GB are releasing a range of 10mm figures, and they gave us a few examples from their upcoming range as a sneak-peek.

Lastly Gripping Beast have recently released a new pack in their steadily expanding Woodbine Designs Science Fiction range. This set of four ‘Corporation Commandos’ retails at £6.50. Any similarity between the look of these figures and the heavily armoured commandos from the Weyland-Yutani corporation is entirely coincidental.