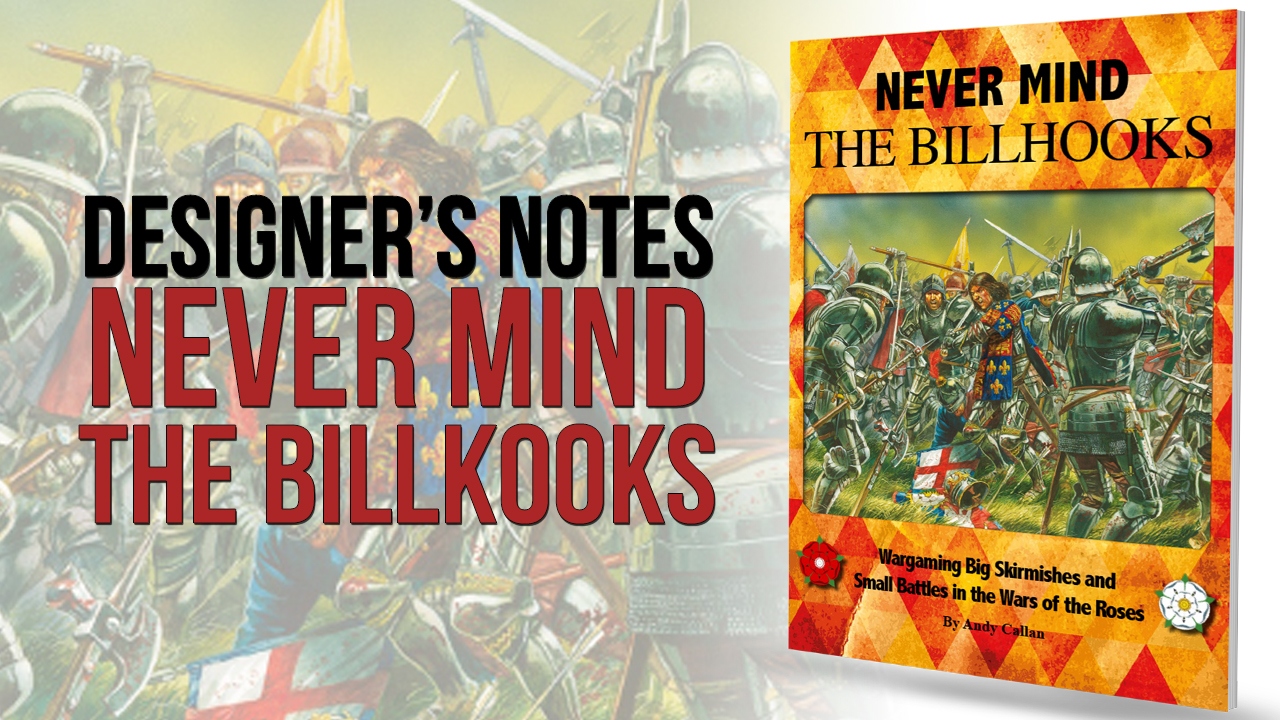 Never Mind the Billhooks is a forthcoming set of wargames rules for fighting fun small battles during the Wars of the Roses.

Ahead of next week’s WiPrime release of Billhooks (which in turn is ahead of the printed release at the end of the month!) we’re giving you the change to read through the author’s Designer’s Notes, and view some extra photos from our early playtest.

‘Billhooks’ Games Designer Andy Callan tells us a bit about where it came from and why.

This all started a few years ago with some games of Sharp Practice by the TooFatLardies. My local group enjoyed the scale of the game – bigger than a skirmish, smaller than a battle – and the card-driven turn sequence. But then along came Studio Tomahawk’s Muskets and Tomahawks and we tried that too and found ourselves getting the two games hopelessly mixed up.  Probably a case of more grey hairs than grey cells!

I solved our problem by coming up with a game that combined what I found to be some of the best elements of the two sets, together with some ideas of my own and we have used my “Big Skirmish: Rules for old wargamers with short attention spans” ever since. But it turned out that wasn’t the end of the story ….

We soon found we had a similar problem with Saga and Lion Rampant. Some bits we liked, others we didn’t and we could never quite remember the mechanisms and subtleties of the rules from one game to the next. So the medieval period looked like being set aside. And then we discovered the Perry 28mm plastic Wars of the Roses range.

You know how it is. “I’ll just buy a box of these to see what they are like…”. And then you find they are very nice indeed and you bring a few along to a club night and everybody else likes them and before you know where you are you have enough for a game. But what rules to use?

Easy… I’ll just do a quick re-write of my ‘Big Skirmish’ rules and we’ll be off and running. Only we didn’t get out of the blocks, it somehow didn’t have the right ‘period flavour’. So, in the end, I had to go back to first principles and do a more or less complete re-write until, after more than a hundred hours of editing and endless playtests we now have a new game that we are happy with and one which the guys at Wargames Illustrated liked so much they decided they would give away for free with the magazine.

Never mind the Billhooks is set at the Big Skirmish/Small battle level, the sort of thing that probably went on a lot of the time, particularly up around the Scottish borders, without ever troubling the chroniclers. My original inspiration was Nibley Green, Gloucestershire, fought in 1470 between the private armies of Lords Lisle and Berkeley, with no more than 1,000 men a side (See Feuds, Raids and Anarchy for more on Nibley Green).

Billhooks is a card-activated game with points-based random army generation and using only good old D6s. You roll dice to hit and dice to save (depending on armour) so it’s very familiar Old School in that respect. Longbows are deadly but not dominant since their arrow supply is limited, so to win a battle you have to get stuck into Melee. Cavalry and skirmishers have their uses but it’s the heavy infantry – Men at Arms, Bills and Pikes – who will win the battle for you.

All the key rules are on a short Cribsheet (with no confusing tables of plusses and minuses) and you should find yourself playing along without too much reference to the main rules after only a few turns. A typical two-player game with about 100 figures a side will play out in 1 to 1 ½ hours but it will easily expand to a bigger, multi-player set-up once everyone is familiar with the common and easily-memorized mechanisms.

If you want to re-fight Towton please look elsewhere. This game is not a simulation of a typical Wars of the Roses set-piece battle. Truth be told, nobody really knows the tactical detail of what went on in those battles anyway because “The Wars of the Roses were… unfortunate in their historians”. (Oman). You can find my own attempt at simulating such scrum-like affairs in the Paper soldiers book I did with Peter Dennis Wargame the Wars of the Roses: 1455-1487 (Helion & Comapany).

By contrast,  Never Mind the Billhooks is very much a lightweight, ‘Beer and Pretzels’ sort of game. The turn of a card or a roll of dice can be significant, and occasionally decisive, but don’t take a defeat to heart. With this game there is always going to be time for a quick re-match.

The above statement is a massive exaggeration, but now I’ve got your attention I did just want to add to Andy’s points by saying that after myself and Asun from Wi played Nevermind the Billhooks we liked it some much I asked Andy if we could work on the rules, make them look pretty and give them away free as a supplement with Wargames Illustrated magazine. Being the all-round good egg that he is Andy never had any desire to profit from their publication and was all too happy for other Wars of the Roses buffs and converts to get their hands of the rules.

Several months of editing, proofreading, playtesting, photography, Coronavirus and designing later and voila – bagged with this magazine is the collective efforts of the small but enthusiastic team involved (particular thanks to Steve W, Pete B, Matt B and Asun). We hope you enjoy them as much as we did/do and that you billhooks never grow rusty.