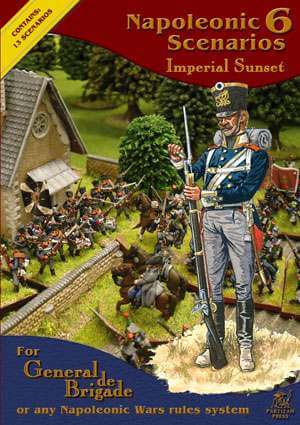 The destruction of the Grande Armee in 1812 was the instigator for the War of the 6th Coalition and would ultimately lead to the first abdication of Napoleon Bonaparte. The war forced Napoleon to fight a numerically superior force that was no longer as inexperienced or poorly led as many he had faced before. With that in mind we will examine Napoleonic Scenarios 6, which covers the campaign from the Battle of Lutzen in 1813 to the Battle of La Rothiere the following year. The book contains 13 scenarios across 61 full colour pages and is designed for the General de Brigade rules, though the author states they can be easily converted for other systems. The scenarios are designed to be played in 15mm on a six foot by 4 foot table. Each scenario contains an introduction, order of battle, map, special rules, and details with regards to setting up.

Each scenario in Napoleonic Scenarios 6 is covered in 3-6 pages, one of which is always a map. There is a brief introduction to “set the scene” followed by deployment and other special rules, then come the orders of battle. The maps are all representative rather than proportional and as such give you an idea of what goes where, this should lead to a quick and easy set up for your games. The orders of battle are nicely detailed and provide both the actual regiment and their rating for each scenario. A major plus is that the scenarios provide the flavour of an action, allowing you to see if you can do better than your historical counterpart as opposed to forcing you to play out to a known outcome.

Unfortunately, there are a few errors which should not have got through editing. For example, the Battle of Dresden: Murat’s Flank does not have an introduction, and page 15 references the British Forces rather than Allied Forces – I guess the format was copied from one of the other supplements and parts were missed. In addition, while I like the orders of battle, I would have liked divisional commander ratings, especially for converting the scenarios to the rules systems I play. The layout of the orders of battle could also do with a tweak because the alternating colour bands for the French are a little dark to make reading easy on older eyes.

I liked this book on the whole; the scenarios seem well researched without being overly prescriptive, and there is enough detail without getting bogged down in minor points. The author states that you can link the scenarios together; however, other than the Battle of Dennewitz, there is no mechanism within the book to do so, meaning you’ll have some work of your own to do. The scenarios will readily be adaptable for Black Powder with a little research for your General’s command level. With all that in mind, when all I have to pick them up on is minor errors and how some tables look I think it is a good thing and therefore a worthwhile book.