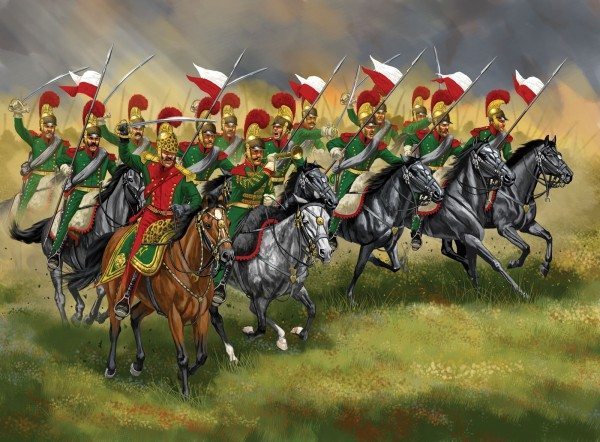 Warlord’s second plastic Napoleonic cavalry box set focuses on the French Line Lancers. These units came into being in 1811 when Napoleon ordered 9 regiments of mainly Dragoons to convert to using the lance. As such their uniforms are very similar, the major difference being the woolen crest on their helmets instead of the flowing horse hair of the dragoons.

The figures are beautifully sculpted and cast in ejection molded plastic for the rank and file whilst the two command figures are cast separately in white metal. On the whole quality is very good and the plastic figures fit together extremely well. I especially like the one-piece lance and pennon which removes the fiddly time consuming process of adding paper pennons. The only issue I came across was the metal Officer’s separate arm which seemed to be a bit of an odd fit.

As with the chasseurs there’s much to praise with these figures and there’s nothing particularly wrong with them, however I do feel Warlord could have been a bit more adventurous than simply giving us the same horses and poses as with their chasseur set. No doubt the reason for this is pure economics and if the same horses hadn’t been used we probably wouldn’t have these figures at all, it’s just that I feel we are missing out on some really dynamic figures and more variation. Where’s the horses at full charge with troopers thrusting their levelled lances?

As mentioned these set utilises the same format as their chasseurs, in fact because French Light Cavalry horses were generic, the horses are exactly the same. The riders also appear to be chasseur bodies simply modified to account for the lances and minor variations in uniform such as gauntlets and helmets. Each sprue comprises two horses and riders, two lance arms, two heads, one sword arm and a carbine. This enables the modeller to produce a unit completely armed with lances or rear ranks armed with swords. There’s also one pair of epaulettes on each sprue to model an elite company trooper.