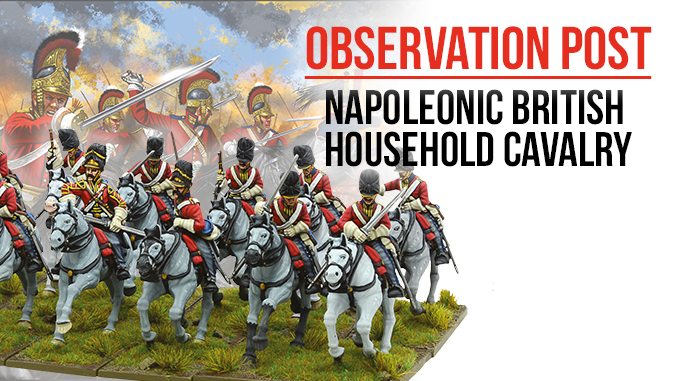 The release of the British Household and Union Brigade Cavalry by Warlord Games has been eagerly awaited for some time. We managed to get hold of a single sprue of Household Cavalry to show you what to expect.

Each sprue consists of two horses and riders, with optional heads and right arms for the riders. Each rider has a carbine moulded on to the right leg and a separate sabretache, scabbard and other equipment.

These figures may be used as either the Life or Horse Guards, most notably to represent the troopers who served during Napoleon’s Hundred Days ca,paign, which culminated in the battle of Waterloo.

Although the figures themselves will look somewhat similar ‘en masse’, the options are there to create some variety. There is also a head without a helmet and an arm with a pistol, sword dangling from a strap, that lets you add some character.

At the time of writing, the final contents of the boxed set have yet to be revealed. However, the contents will no doubt follow the usual Warlord practice of allowing you to field 12 plastic cavalry with some metal miniatures. Due out in June, these may sell out quite quickly, so it could be a good idea to get that pre-order in as soon as the option appears.