Napoleon and the Archduke Charles 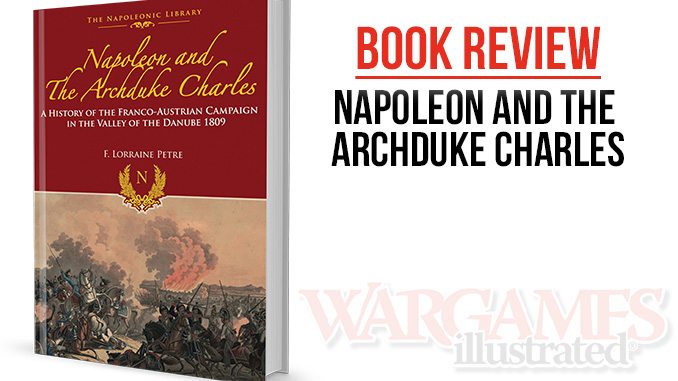 Napoleon and the Archduke Charles – A History of the Franco-Austrian campaign in the Valley of the Danube 1809
F. Loraine Petre
Frontline Books, 1991 reprinted 2017
Reviewed by Dom Sore

In my youth, I visited my local library to widen my historical knowledge of the Napoleonic Wars, starting with a book on the 1809 campaign. It was the first time I learned anything in detail about Napoleon’s campaigns and where I discovered Napoleon was fallible. For many years I have cursed myself for not noting down the name of the book. Then this volume came through my letterbox for review, and I soon realised it is a reprint and the author someone most Napoleonic students should know!

Originally written in 1909, Napoleon and the Archduke Charles covers the whole campaign from start to finish in just over 400 pages. It has not been revised, not surprising given the author is not available, being dead for nearly a century. That means the content does not encompass any modern research yet the broad strokes are there and Petre remains arguably the foundational historian for the Danube campaign. This is, however, a lazy, straight reprint, reproducing any errors from the original, and the print is from a scan, resulting in fuzziness in the text, which is also of an old-fashioned typeface. The other main drawback is the maps; younger me remembers these as large fold-out affairs, but they are now relegated to small reproductions in the back of the book. This makes the detail hard to read and combined with the fuzziness caused by the scan they become harder to use and understand.

The book itself is a great read; Petre had an easy-to-read style that stands the test of time. The build up to the campaign is handled succinctly and you get a brief overview of the two forces. I also still like how he gives a brief summary of the various commanders and their respective abilities. The battles are described well throughout, without getting bogged down in the minutiae. The campaign as a whole is covered well and objectively, Petre only provides his opinion where necessary.

This is an excellent book, and old me is as impressed as I was in my youth. I do yearn for the larger maps for nostalgic reasons and who doesn’t like looking at old maps? Modern technology means I can get a decent version online though, which save flipping between pages so it is not a chore. Finally, getting my hands on this book has given me a push to restart my 28mm Austrians. Will I refight Wagram? Essling-Aspern? Thann? Abensberg? Or that long awaited campaign covering them all in one way or another? I will probably start with Sharpe Practice 2 to fight some of the skirmishes and then increase the force to play Black Powder. And then maybe bigger, where is my Pendraken 10mm catalogue…