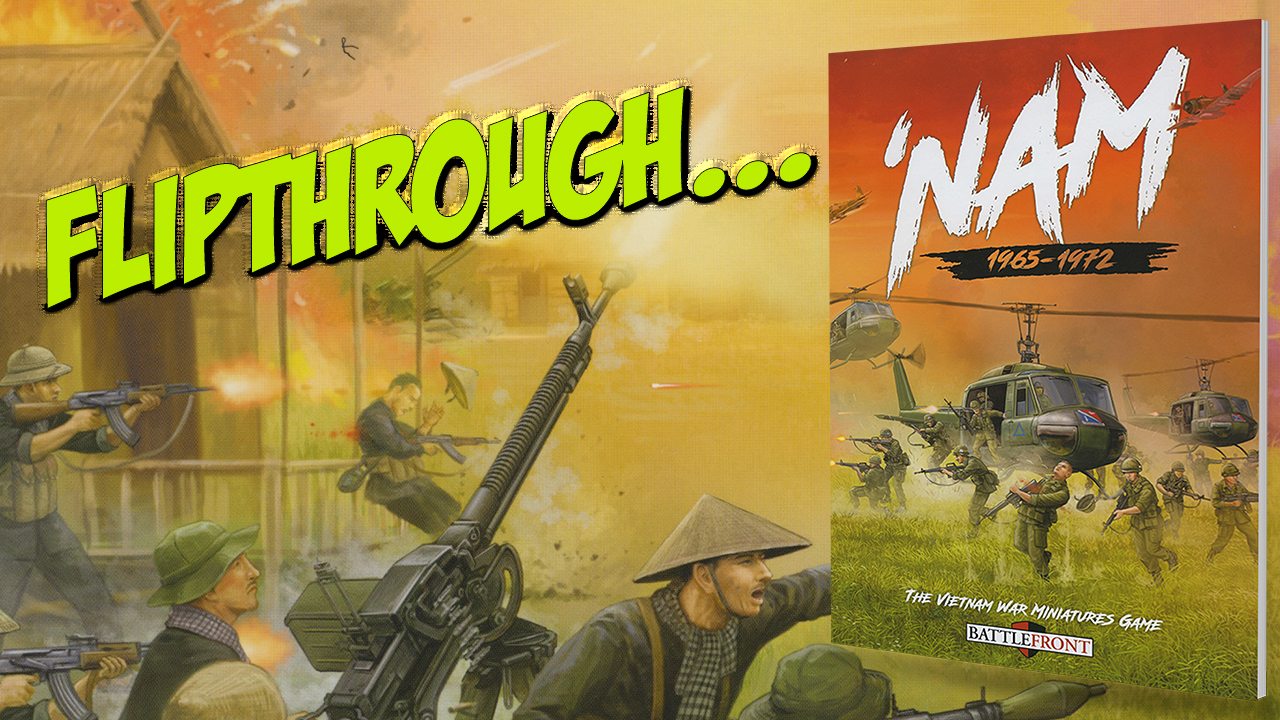 Published by Osprey Publishing and created by Battlefront, the Nam 1965 – 1972 provides rules and army lists for gaming larger actions during the Vietnam War. Expanded, updated and made anew, this is a complete package for those looking to game from the Delta to the DMZ.

The book begins with a guide to the history of Vietnam spread over a number of pages. Each year is summarized in a paragraph or two, covering the major events in the war. A nice touch is the use of the Billboard charts for that year, giving ideas for the type of music that could be played in the background of your games to evoke the period. There are also some inspirational photographs that help to illustrate the range of opportunities offered. After the history section, there is a useful ‘beginner’s guide’ to gaming with the ‘Nam rules and miniatures, a very nice touch.

The key concepts of the rules, such as Teams, Units and Formations are all explained, as are the Unit Cards. Taking the same format and style of the Team Yankee and Flames of War Version 4 as a basis, all you need to use the various units during a game is recorded on the card, complete with die scores, movement rates and ranges. The rules themselves are therefore based upon the other rule sets; with a similar turn sequence, movement and shooting processes. All of these are explained using handy diagrams which use staged photographs of miniatures and terrain ‘in play’ and suitable written explanation.

The Special Rules for weapons and equipment are still here, but have been updated to reflect the adoption of a new rules system. The game system also includes the unique rules for Guerilla Warfare and Resistance Fighters that was a particular feature of this war, allowing you to field units beyond the conventional forces.

The army lists are fairly comprehensive, with the US list alone covering the 1st Cavalry (Airmobile), 11th Armored Cavalry, 25th Infantry Division, United States Marine Corps and the Mobile Riverine Force, plus all the possible support options from Medevac to air support. Each different type of formation has a double page spread outlining one or more of the operations undertaken by the units involved, allowing the gamer to gain an insight into how they were used in battle. These various options are pretty much all grouped together for the first time in one place, and gamers may choose the type of force that best reflects their particular interests or allow them to mix and match.

Having outlined the US forces options, the other Free World forces and the North Vietnamese army and Vietcong guerillas are also represented by their own lists. The Army of the Republic of Vietnam ARVN) and Australian and New Zealand Army Corps (ANZAC) lists offer a smaller but no less detailed examination of these Free World warriors, each with their own equipment and fighting styles. The People’s Army of Vietnam (PAVN) and Local Forces (Vietcong) are dealt with in equal detail, with specialist rules and operational outlines. The PAVN list also contains details for the larger scale operations of the so-called ‘Third Phase’, where conventional forces such as armor and anti-tank assets were employed.

There are six Missions outlined in the rules, providing everything needed to run games set in Vietnam. Victory conditions, special rules, are all detailed here, plus clearly defined examples of how to use aspects of the missions. Table layouts are simply laid out, and specialist rules for dealing with some of the unique aspects of the Vietnam War, such as the importance of dealing with the wounded and fighting at night, are provided to add to the gaming experience. There are also painting guides for all the units involved, plus visuals referencing for the miniatures range.

This rulebook collects together all the previously available material available from past publications, then updates the rules to embrace the more streamlined approach to gaming of recent releases. Consequently, many of the rules are potentially transportable into Team Yankee if desired and vice versa. However, as a stand-alone game to represent the struggle for Vietnam, pretty much every option has been covered for those looking to re-enact this most varied war.