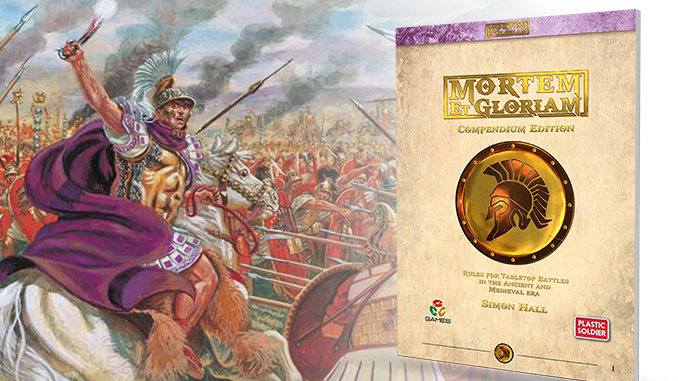 Mortem et Gloriam (MeG) is an increasingly popular set of wargames rules which aims to cover the ancient period from Biblical times through to late medieval.

Author, Simon Hall, was a big fan of the various iterations of the DBM rules and was involved in writing their successor, Field of Glory. I believe MeG was his first venture into writing rules “solo” and, although the first edition of these rules is very different from both DBM and FoG, fans of these rules will certainly see similarities. First edition MeG came in a snazzy ring binder that was very useful for leaving the rules open at a particular page, but also came with numerous quick reference sheets that actually meant you often didn’t need to refer to the ring binder at all.

So what can players expect from the updated “Compendium Edition” of MeG? Well, in terms of rule changes and amendments, not a lot. Simon has made some small changes to flank charges, break offs and several other rules brought about by feedback from MeG players to remove some of the more beardy loopholes that people were exploiting, but if you have played MeG before then there will not be much here that changes your game experience.

What is new is the layout and the presentation of the game. It is in full colour and contains excellent artwork depicting various ancient armies as well as numerous photos of wargame armies deployed for battle. There is a much better contents page, making finding rules that much easier, and I thought the rules just flowed better than the original.

For the uninitiated, armies in MeG are made up of “bases.” Each base will have three or four figures on it of the appropriate troop type and a certain number of bases will be combined to make a unit, or Tactical Unit Group (TUG). Each base costs points, dependent on its skill level, with well-armoured veterans costing considerably more than unarmoured militia. They are designed for any scale of figures, with the number of bases being the key factor, but most games seem to be played using 15mm miniatures. In the compendium edition, suggestions are included for playing MeG at three different levels: Maximus, with a huge number of bases, through Magna, which has fewer bases in each unit but retains the same number of units, to Pacto, where each unit might be represented by only one or two bases. Using the “Pacto” or compact option, players can get started with MeG without needing huge Ancient armies. Indeed, these rules provide some images of units at the back of the rules for you to print out and stick onto bases, allowing new players to try out the rules even if they do not own any ancient miniatures, which I thought was a great idea.

The new edition retains the innovative pre-battle system, where the terrain for your wargame is decided by playing out a short game that represents the movement of the opposing armies in the five days prior to battle. Armies with good scouting ability and light horse can do well here, forcing opposing armies onto ground of their choosing. Once the pre-battle manoeuvres are finished, the key terrain features are placed and other terrain diced for. This is a really clever idea and aims to replicate a part of campaigning that is often ignored in wargames rules.

The Command and Control system in MeG is unique as far as I am aware. In essence, in order to move your units you need to have cards to do so. A deck comes with the game in which the cards are coloured black, white, green, yellow and red. In the latest deck, Simon has also put numbers on them for people who have difficulty seeing different colours whilst the backs of the cards now match the game mats so as not too look to out of place on the wargames table. The number of cards you get depends on how good your general is, with Legendary generals such as Alexander the Great getting five and mediocre generals getting two. Players take it in turns to activate a unit using the cards, with drilled troops needing green or white cards to manoeuvre and tribes of barbarians needing the much rarer red or yellow cards to do anything other than going straight forward. I really like this system, and Simon hints in the body of the rules that this “Colour Command and Combat” system is being adapted for other periods.

The combat system is similar, using custom coloured dice to obtain the result of shooting and melees. These dice have a skull result, which removes a base, a wound result, which is recorded against a base, a blank side for no result and an “S” which allows the unit to use a special ability if it has one, such as shieldwall. The deadly red dice, which might be rolled by charging medieval knights for example, has lots of skulls and wounds, with numbers of these reduced on the yellow, green and white dice until you reach black, which might be rolled by militia or unarmoured skirmishers, and which has mostly blank faces. You simply work out what colour dice your troop type gets, which might go up a colour if you’re charging or down a colour if you’re in one rank and so on, and then roll that dice to get the result.

At 240 pages, you certainly get a lot of bang for your buck with this new edition. There are enough new bits and pieces here to make it worthwhile for established players of MeG to pick up this new copy. As with any set of rules designed for tournament play, some of the rules have to be explained in intricate detail with clear diagrams to illustrate what can and cannot be done. New players may find this level of complexity in the rules intimidating, but fortunately there is some great online support for this game, with video tutorials on YouTube and on the MeG website, as well as FAQ and examples of play. The army lists for the game are also provided free of charge along with a great deal of other material on the official MeG website.

If you are an ancients gamer, either one with 15mm DBM armies gathering dust in a cupboard, or you’re buying into the new figures in support of MeG from PSC, I would encourage you to have a look at these rules. Whilst probably not everybody’s cup of tea, they do contain genuinely innovative ideas, such as the “Colour Command and Combat” system or the pre-battle set up, which make them stand out from the herd.