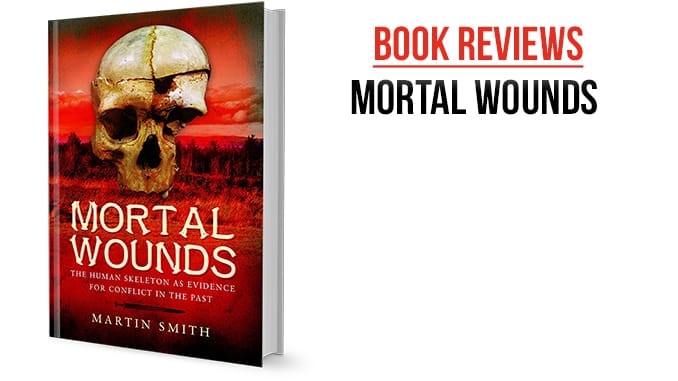 All evidence of warfare is ambiguous except one, the human skeleton, argues Martin Smith in Mortal Wounds. The reason for that is literary and archaeological evidence is the product of human activity but the skeleton is the human itself. When violence is inflicted on a human, it cannot be hidden under interpretation because the nature of that violence is now scientifically decodable. With that base established, Smith takes us on an exploratory tour of war’s effects on the human body throughout history.

Mortal Wounds begins with an examination of the skeleton and how we know what happened to it with a brief detour into the broader question of the role of warfare in social and cultural development. Smith is firmly of the view that the ‘pacified past’ thesis has been greatly exaggerated and we need to reinstate warfare as the primary means of historical change. To augment his argument, Smith delves into pre-history, examining the emergence of weapons and the damage they caused. He makes a strong case, with the help of anthropology, for war as a regular activity through the Mesolithic and Neolithic periods and into the Bronze Age, the traditional epoch for the introduction of organized warfare. The key here is to find group burials that are harder to equate with anything other than war, and Smith finds a surprising amount of examples. You might think the introduction of writing would resolve all arguments over warlike behaviour, but not so – what you write about an illiterate enemy might not be true. Again, Smith does not take too long in knocking that down. Mortal Wounds concludes with descriptions of the fearful injuries caused by gunpowder propelled projectiles, gruesome stuff.

To his credit, Smith examines other forms of violence; for example, sacrifice and punishment. But he makes a good case that warfare, far from being a peripheral human activity, has been central to the human experience ever since we gathered in groups for comfort and security. Despite being a bit wordy and some unwarranted flippancy, Smith does so quite effectively. Historians of pre-history will get much out of Mortal Wounds as will those who enjoy archaeological investigation – the moral is that skeletons don’t lie. There isn’t much for wargamers, however, other than an interesting read.