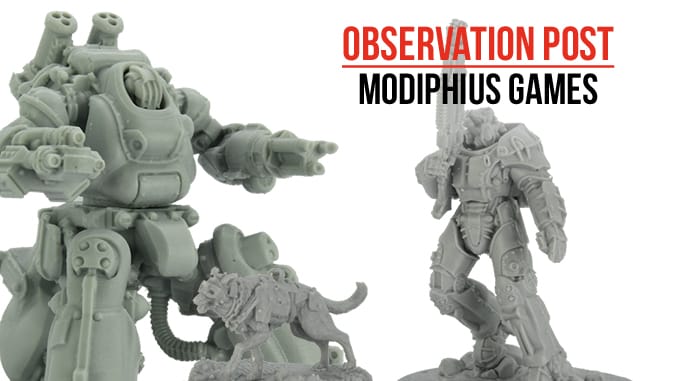 Received for review are three boxed sets of figures, containing some of the key Player Character and Non-Player Characters from both the computer and tabletop versions of the game universe.

First of all, we have one of the new Survivors boxes, the X-O1 Survivor & Dogmeat. This represents the main character in the narrative, the Vault Dweller and his faithful hound, with the former in the power armoured suit that aids in preserving life amidst the dangers of the Wasteland. Dogmeat, the faithful hound, also wears armour, made from plates of metal and pieces of leather. Although noted as being ‘multi-part’, the miniatures are mostly complete, with the X-01 Survivor only needing the addition of the fight arm with weapon and a decision on the choice of head, helmeted or unhelmeted male or female.

The next figure is from the Robots faction, a large Sentry Bot. This is a multi-part figure of a dangerous looking robot, with a choice of weaponry and needing minimal assembly. This is a fairly advanced looking robot, with some interesting features, like the tri-pedal legs, the unusual tracks and the small head set back into the armoured chest.

The last box contains 5 miniatures in total, again from the Robots faction, the Assaultrons and Protectrons. There are 3 Assaultrons, slim looking robots with a feminine appearance armed with some dangerous looking weaponry in some suitably combat-like poses. The other 2 miniatures are Protectrons, much ‘chunkier’ robots with a less warlike appearance, but still with evidence of built in weapons. Again, minimal assembly is required, meaning that getting these figures onto the tabletop would be fairly rapid.

These sculpts are directly based upon the images from the computer game, and are very detailed. The 3D sculpting is excellent, and the figures are packed full of character. A great touch is the use of some sculpted scenic bases, so you simply need to put the figures together, add them to the scenic bases and add paint. The figures could also be used in a number of other sci-fi gaming universes.