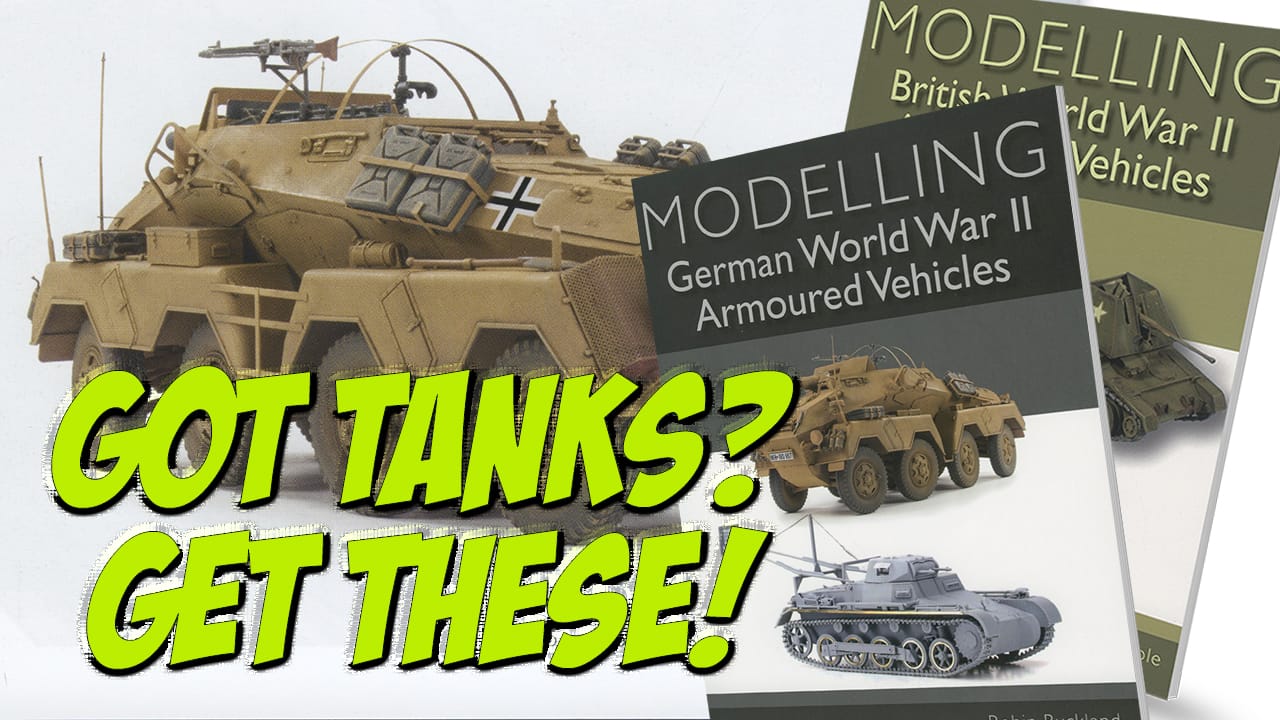 The British book begins with a thorough exploration of the smaller scale models available, whether plastic or resin kits. The German book takes a different approach, exploring the growth of model kits, and the historical background of the German Army’s Panzer arm. In Chapter 3, however, they do both focus upon the tools, materials and basic skills needed to make the most of the model kits available, and the German book adds advice on choosing your models in Chapter 4.

The British book details the construction of typical British AFVs from World War Two, using examples from a number of scales and particular types of tank, most notably the M3 Grant, the Sherman, and others, complete with helpful tips to make the most of kits along the way. The German book also takes a look at certain kits, such as the 1/72 Kfz 13, and how to put them together to look their very best.

The British book goes into detail by examining how to detail and convert your tanks, adding levels of realism to the kits including weathering, decals, paint techniques such as chipping and rust and much more. Again, this section focuses upon particular kits and tanks, but explores techniques which could be used on any type of kit. Chapter Six also moves beyond the realm of the armoured vehicle to outline the so-called ‘soft-skin’ vehicles used, whether support or transport vehicles, again with certain types of vehicles and kits in mind.

The German book has a similar approach to the topic of painting, but also introduces the use of airbrushes and the role of camouflage within the German army, plus how to replicate this whilst using certain painting styles. Spray paints are also examined, as are brush types, and some useful photo references of actual vehicles, including not just tanks but also transport vehicles.

The British book goes into extra areas, looking at the world of the artillery piece, anti-aircraft pieces, and how to prepare and paint British figures, complete with how to prep plastic or metal figures, the paint colours and best brands to use. There is then a focus upon the world of the diorama and scenic bases, including using terrain and building kits.

The German book segues from model kits to a series of museum references and photographs of the ‘real things’, again aiding in creating accurate versions of the kits which may be bought. This is a useful part of the guide, which aids in research opportunities for those aiming to produce the most realistic kits they can.

Although from the same publisher, these two books, Tom Cole’s British focus and Robin Buckland’s German focus, cover largely the same ground. Both explore materials, painting techniques, types of kits available and detailing. However, the British focused book also adds a wider variety of vehicles, artillery and even miniatures to the mix, whereas the German focused tome provides access to actual camouflage styles and photographs of real vehicles for reference. Overall, both books offer a great deal to the model maker and wargamer, and are both worth a closer look.