Creating A Lost TV Show That Never Was 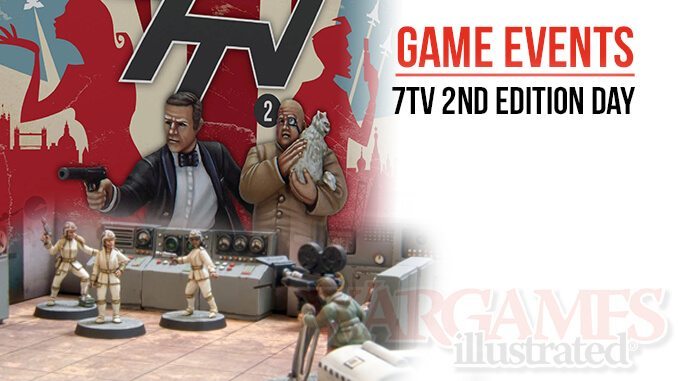 Attendee Mike Jarvis provides and account of the creation of his 7TV2 Cast for use at one of our event days.

If you missed out on our 7TV Day event, never fear, for the fine folk at Crooked Dice Game Design Studio have kindly provided the Episode information. Now, you to can film your own version of the ‘Kessel’s Run’ mini-series, in the comfort of your own chosen studio. Each Episode is designed to be run in any location and with any sized Cast, so what’s stopping you? Lights, Camera, Action!

7TV is one of those games that stands out just for being so original. A skirmish wargame themed around cult TV (with an unspoken focus on the 1960s and 70s) is not something that has a lot of competition. I first came across it with the release of the first edition rulebook a few years ago, and it ticked all the boxes for me. Yes, I have a long-standing love of programmes like The Avengers, The Prisoner and the original Randall and Hopkirk (Deceased) but also my gaming background is as a roleplayer rather than a wargamer. 7TV struck the right level with me by providing rules for a game that could be played in an hour or two with only a handful of figures on each side, but also having more storyline-themes games and for providing the framework to design my own ‘TV series’ that hopefully echoed some of the style and feel of those old programmes I loved.

With the second edition rules (7TV2 to its many friends) came a much more streamlined and more readily accessible game. The game system has undergone a complete revamp, making it not only easier to play but also closer in atmosphere to the programmes it emulates. Cast design has changed completely too. The boxed game comes with a plethora of character profiles, so it’s a simple matter of finding the cards that best match the cast members you want in your programme; checking that their ‘ratings’ (points values) don’t exceed that of your game and away you go. Now, I could just pick cast cards that I like, but that’s not my way. I enjoy the act of designing a programme that could have existed back on the fictional 7TV channel.

For the recent 7TV Day at Wargames Illustrated’s HQ, I wanted to revisit a programme I’d designed some years ago for the first edition game, but never actually played. I’d had the idea of mimicking a chaotic, low budget children’s TV show of the late 60s and early 70s; something where silliness and a small (i.e.cheap) cast were the main requirements. I was particularly inspired by a barely-remembered programme called Pardon My Genie, in which a hapless hardware shop worker could summon a genie by polishing an old watering can. Usually with ‘hilarious’ consequences. My first thought was that I needed a ‘genie’. Not a literal one, but something colourful and eye-catching that kids would love and immediately side with. This soon became a dinosaur-man, hatched out of an egg in an antique shop, and with that the rest of the cast fell into place. There was Mr Grover the antique shop owner, Marty, a 10 year old boy who played in the shop, and his tomboy friend Jen.

So, I wrote up the cast, worked out all the stats and special abilities and then did nothing with them. They just sat there long-forgotten (like other children’s TV shows of that era). With the advent of the 7TV Day, I decided that ‘Marty’s Monster’ ought to make its live-action debut. First stage was to check out the casting under the new rules. That was a breeze. Monty the Monster fitted the ‘Action Hero’ profile perfectly (or vice-versa). Essentially, this is a character who can take a lot of damage, but is also adept at giving it out, especially in close combat. These felt like the sort of abilities a man in a big rubber dinosaur suit should have. For Marty the’ Dependable Deputy’ just fitted. I loved the fact that the ‘Sidekick’ ability allowed him to activate for free whenever Monty was activated. This made the duo a real team that was interdependent. Jen became an ‘Angel of Justice’; a proper little fighting hellcat. Of course, a 10 year old girl should not have a pistol or martial arts skill, but spelling pistol ‘c-a-t-a-p-u-l-t’ and writing ‘Fights dirty’ where it used to say ‘Martial Arts’ took care of that. The game effects (and hence game balance) remained unchanged, but the atmosphere was retained. For Mr Grover, he had to be an ‘Investigative Academic’, pretty much useless for anything other than turning up clues and dazzling people with a torch. That felt absolutely right for an elderly shop owner, and yet still reasonably useful for examining objectives in the game.

That all took 27 ratings out of the 30 allowed for the game. Personally, I was happy with that because although the shortfall put me at a bit of a disadvantage, it all felt right thematically. Then a friend suggested rounding out with a 2 ratings security guard. Now clearly, Marty’s Monster had no need of a security guard, armed with pistol and baton. But it could use Vicki, Jen’s elder sister and captain of St. Bartholomew’s school hockey team! The baton became a hockey stick and the pistol became a thrown hockey ball (much funnier in a 4:20 pm time slot) and there you have a completed cast. All very quick and easy to do.

From Cards To Tabletop Reality

The next step was acquiring and painting the figures. The two schoolgirls were easy to find, coming direct from 7TV’s overlords at Crooked Dice. Marty was a perfect find at Killer B Games (the figure even has a catapult, fitting in with another modified profile). The hardest one to find by far was Mr Grover, given that there’s a dearth of unarmed miniatures out there. Thankfully, another 7TV player found the perfect figure on the Artizan website and pointed me to it. Monty was a modelling project I’d wanted to do since I first conceived of the cast. Ideally I wanted him to look like an actor in an ill-fitting rubber suit, rather than an actual dinosaur man (if that makes any kind of sense). I knew 4A Miniatures made a great bipedal prehistoric creature, but it was just far too good to be Monty. Firstly the head had to go, as did the fins. I replaced the head with a Lizard Nazi Soldier head (again, from Crooked Dice) and attached the tail from the same figure in the appropriate place. In fitting the head, I used brass rod and Green Stuff to extend the neck. I wanted to be sure that it looked like the neck was housing the head of the actor inside. I even attempted to sculpt a little mesh panel in the neck to allow the poor, underpaid, and entirely fictional, actor to see out. Add some Green Stuff ‘plates’ down the back and that just left the painting and mounting on some Gladius Game Arts resin pavement bases to give them a pleasing uniform look.

Stand By For Action!

And so to the day itself. Not playing much in the way of ‘conventional’ wargames, I’d never been to Wargames Illustrated’s nerve centre before, and it seemed my satnav felt that this should remain the case, but despite its best efforts we made it there in plenty of time to receive a warm welcome and a gratefully received mug of coffee.

The games themselves were played out on beautiful 2’x2’ tables ranging in setting from a rundown warehouse district to a ruined jungle temple, via villainous mountain lairs and quiet British villages. The slightly smaller than usual tables made for swift games as contact with the enemy happened rapidly. In my case those enemies proved to be a crooked police squad (they had to be crooked; they were shooting at little girls), a dazzling band of circus performers and some kind of paramilitary science fiction force. All games played like a dream and were not only great fun, but filled with the sort of incidents that should happen in a TV drama, with the game throwing up mistaken identities, hidden nerve gas caches and lone heroes holding off multiple minions. Wonderful stuff!

It was over all too quickly, but a highly enjoyable day and one I’d be all too happy to repeat should the powers that be decide that another event is in order. Of course, I’d have to create a new cast were that to happen…