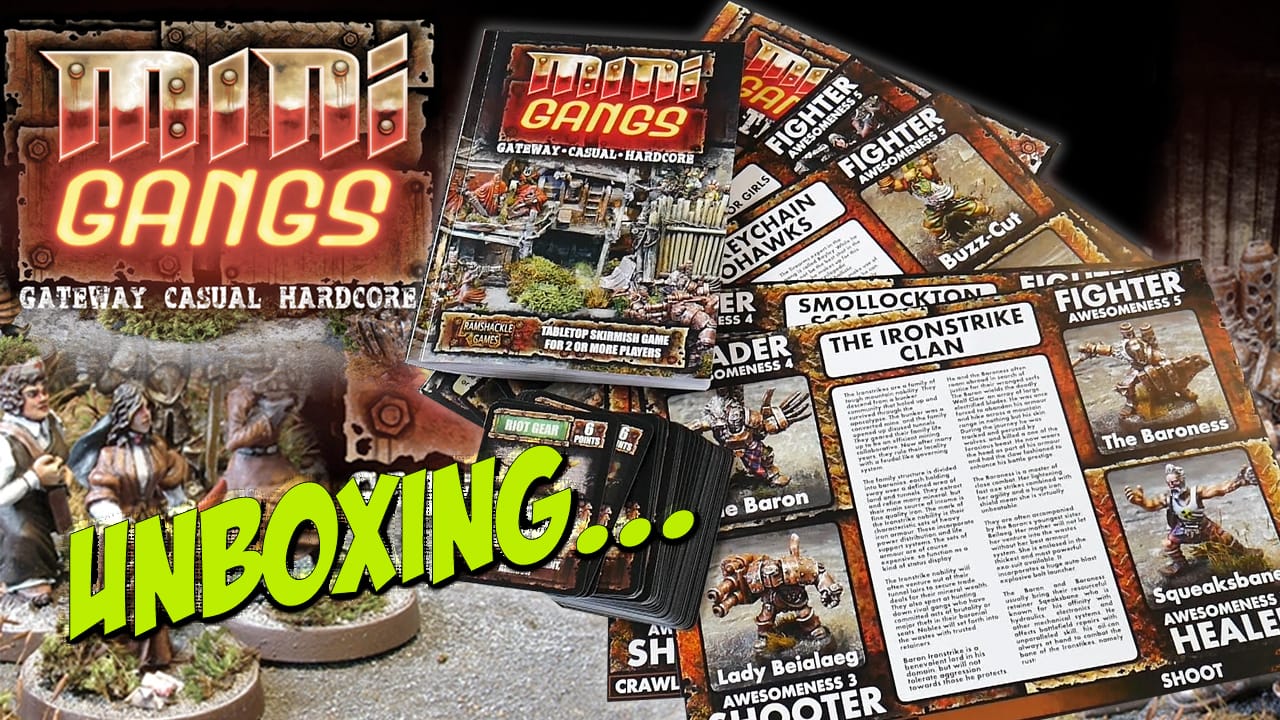 Mini Gangs is a new rule set from Ramshackle Games that combines ease of play with a number of strategic options. Its intention is for use as a short club game, for playing out a campaign and for getting beginners into tabletop battle games.

Mini Gangs can be played in three different ways, each appealing to a different level of gamer. ‘Gateway’ offers a simple and easy game for beginners, ‘Casual’ is a game for easy play and deeper use of strategy and ‘Hardcore’ aims to be a more in-depth gaming experience, complete with a points system and campaign play.

The Gateway version of the game establishes the basic rules. The gameplay is aimed at the total novice and children.

The ‘starter’ gang consists of four figures: a Leader, Fighter, Shooter and Healer. Each of these figures can carry out a number of listed actions; if it isn’t on the list, it cannot be carried out. All characters may Move, all can Fight and Crawl but only Leaders and Shooters may Shoot and only Leaders and Fighters may Charge.

Rather than having a whole series of stat names and numbered levels, these rules have one, called Awesomeness. Each figure has a level, as noted in the rules. If Shooting or Healing, players have to roll above the awesomeness number on a D6 to hit and if Fighting, you have to roll below the Awesomeness.

The Casual rules build upon the basic and add new skills, weapons, equipment and armour via the use of the Mini Gangs cards.

Each gang receives 8 cards that are then placed on the gang profile sheet as desired. These cards use key words, which tells you what aspect of the rules that the card is a part of, how many times it can be used and how it works in the game.

The Hardcore rules build upon the two other stages, to add point’s values to the game in terms of gang creation, equipment and armour, plus the various Strategies which may be purchased and used.

Once these are established, there is a basic campaign system, which includes 6 scenarios that may be linked together to form the basis of your campaign gaming, or used as one off adventures.

This is an interesting set of rules that would serve to allow an access point for those new to tabletop gaming but also has enough additional content to encourage growth.

It would make a good participation game for use at shows or conventions. The rules come with everything needed to play, including a shortened version that is accessible to children, double sided profile cards for a number of gangs, the Mini Gang cards, an A5 rulebook and even a six-sided dice.

The company also makes a number of 28mm miniatures that are designed for use with the game but, as the system uses ‘archetypes’, any plastic or metal miniatures could be used. A different take on spreading the hobby whilst being a quick and easy set of rules which allows for more involved expansion.