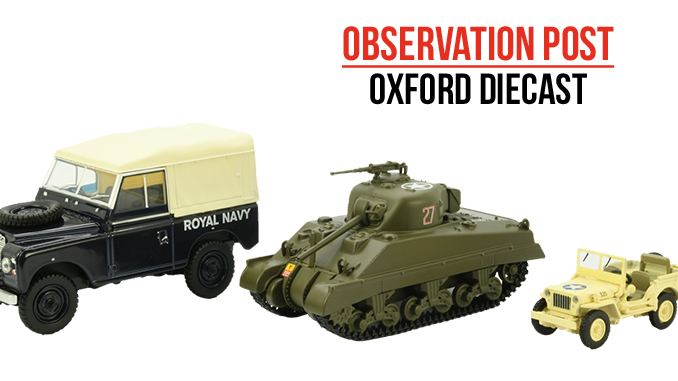 “Oxford Diecast” will probably be well known to most readers as they produce an extensive range of ready painted diecast civilian vehicles, many of which may already be in your 1920’s gangster collections or World War II Home Guard. Perhaps less well known is their extensive, and growing, military range, three of which we have been sent for review.

First up is a 1/76th scale replica of the USA produced Medium M4/A2 Sherman tank. Painted to depict a tank of the 4th/7th Royal Dragoon Guards, as they appeared in France in1944, it has the insignia of the 8th Armoured Brigade painted front and rear as well as the white star on the top of the turret for aerial recognition. The version we have been sent has a rear turret box added but I note on their website that other variations of the design are available, as well as some painted in desert colours.

Next up is a series III Land Rover in 1/43rd scale. It has the canvas roof and is painted in Royal Navy blue. I am not sure how much use wargamer’s would get from this particular variant, but numerous other Land Rovers are available from Oxford in this scale, including Gulf War variants, long wheel base Red Cross, Cold War Berlin and even NATO versions. I have used the Gulf War versions alongside my 28mm British and they are a pretty good fit size wise. Given how many of these vehicles were produced and used by the military all over the world, this has got to be one of the most useful models in the range.

Finally, there is a 1/76th scale Willys jeep, painted as it would have appeared when used by the USAAF in Tunisia in 1943. There are lots of great little details on this model which you might not pick up on first glance, such as the tiny serial numbers and US star on the fuel can attached to the back or the spade fixed below the drivers door.

All of these models are designed for collectors and come ready for display in clear plastic boxes and with immaculate paint jobs. However, wargamers should waste no time in unboxing these vehicles, splattering some mud on their wheels and dry brushing some wear and tear on the paint work before deploying them for battle. Many companies do packs of extra stowage which could also be added to you’re your vehicle the campaign look. Perhaps a little pricier than plastic kits, they do come ready painted and detailed and have a nice weight to them. If you game in these scales, Oxford might be well worth checking out.