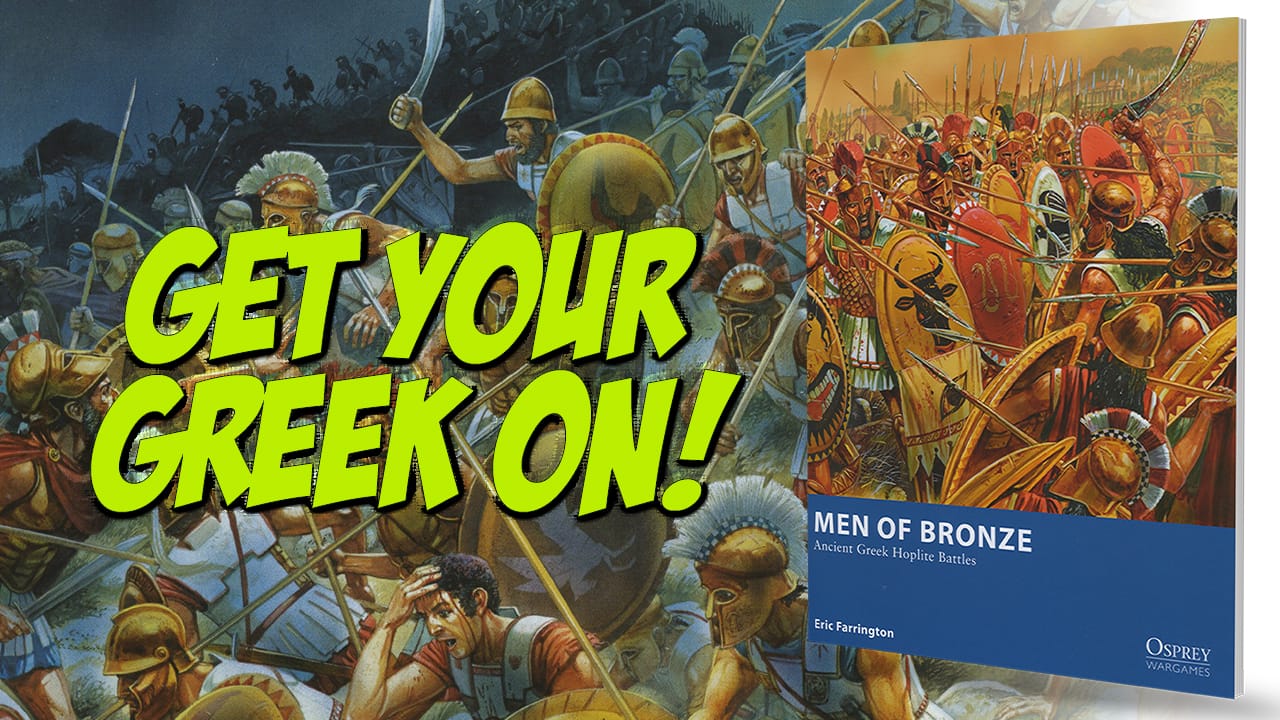 Men of Bronze is one of the latest ‘blue book’ rules systems from Osprey Games. It consequently follows the usual format, a 64-page softback book. The rules focus upon battles between Ancient Greek warriors and their enemies, often other Greek warriors!

The rules begin with a helpful guide to the equipment needed, miniatures, basing, measurements and everything else. There is also a brief but concise history of the Greek City States and their enemies. The rules are designed to be largely miniature and scale agnostic, and no exact base size other than figures being individually based. The system uses six-sided dice, and the Base Width method for movement.

The core rules use Unit Profiles to define the figures, discusses the unit size of 10 models, and the two basic formations, Open Order and Phalanx. There is also an explanation of the use of smaller sized models than 28mm, the main focus, and the use of multi-based models.

The basic Turn Sequence is as shown, exploring the Phases, and role of Arete Points, used as a player’s pool of ‘special activation’ tokens which may be used to make a charge, utilize a unit’s special rules, re-roll a die, etc. They may be ‘played’ at any time, including as an ‘interrupt’ to an opponent’s actions.

Movement is made using the unit’s leader as a focal point, who is placed at the centre of the unit and should be obviously painted or posed to be recognizable. Open order units may be within two Base Widths of the leader, whilst Phalanx formation has all the bases touching. The leader base is always moved, then the rest of the unit are placed around them. Terrain effects movement, as defined.

Melee means coming into contact with the enemy, with supporting units being used to aid in Melee combat. Melee may take place between units on a one-on-one basis, and may be made against multiple units. Dice are rolled to determine the outcome, with modifiers, and the number of hits caused compared to the armour of the units. Courage points stands in for Morale, and, along with the Discipline rating, is used to define the status of a unit e.g. a unit loses 2 Courage points after losses in melee. They now have to roll twice against their Discipline rating, needing two 4+ successes to avoid the penalties of Wavering.

Shooting works in a similar way to Melee. The End Phase is where the consequences of combat actions are finally calculated, with losses leading to a Check for Collapse and, the more figures which are lost, the more chance of an Army being Routed. Once you have mastered the basic rules, there are a number of Advanced and the details on the Special Rules available to units and activated by the Arete Points. The different classes of Units are explored, complete with the various statlines and an explanation of each potential unit option.

The next section offers information on creating Historical armies, complete with sample armies, before moving onto the Battles and Scenarios section, which are offered in both generic and historical forms. A nice touch are the Complications, which are aspects of battle which can effect the course of the battle or the final results.

This set of rules offers an introduction to Ancient Greek Battles, and works well within the framework of the period. The emphasis upon leadership is key to the period and is reflected in the rules, and the Arete Points work well to vary the opportunities available during games. In company with all the Osprey ‘blue books’, this is a complete game with options to add extra elements. A useful set of rules, albeit one with a particular focus rather than a widespread, period-wide approach.